Midtown Comics posted something unusual on their Tumblr on Thursday: A reasonably credible poster for a “Wonder Twins” movie featuring “Kunis” and “Kutcher” — former “That ’70s Show” co-stars and current celebrity couple Mila Kunis and Ashton Kutcher — with DC Comics and Warner Bros.logos, plus a date of 2014. 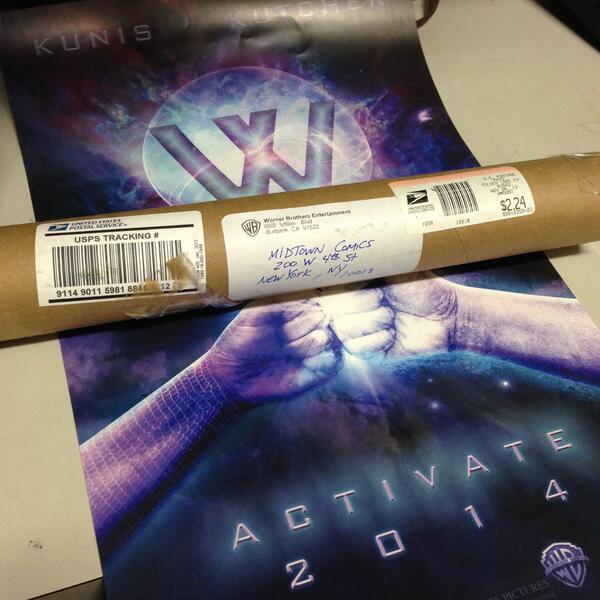 Of course, quite a few things immediately seem wrong about that: such a project has never been reported to be in development, 2014 seems way too soon for a previously unheard of genre film to be released, major studio films aren’t generally announced by sending posters to comic book stores, and, oh yeah, a movie about the Wonder Twins — associated with an outdated, simplistic take on superheroes — starring Mila Kunis and Ashton Kutcher seems exactly like the kind of thing someone would make up to provoke a reaction among comic book fans. (For the unfamiliar, The Wonder Twins are alien siblings introduced as part of the ’70s “Super Friends” cartoon, and were integrated into DC Universe continuity in 1995 series “Extreme Justice.”)

So, yes, it appears this is a hoax, or viral marketing for something. But what, and by whom? Midtown followed up their initial post with a tweet purportedly showing the tube the poster arrived in, claiming it’s proof that it came from Warner Bros.:

Now, obviously that’s not necessarily proof the poster, or even the poster tube, came from Warner Bros. But presuming this isn’t Midtown pulling a prank on the geek world (though they did appear to enjoy the attention they’ve gotten for it thus far), the popular speculation seems to be that it’s viral marketing for the upcoming “Entourage” film, a Warner Bros. production. As io9 reasons, main character Vincent Chase (Adrian Grenier) starring in a fictional “Aquaman” film was a major part of the HBO show’s second and third seasons, so the movie might be returning to similar territory.

That also may not be quite right. The “Entourage” movie has only been official for less than three weeks, so it might be early for a viral marketing campaign, especially one that doesn’t overtly involve any of the property’s characters. Yet an “Entourage” film has been discussed since before the series ended in 2011, and a script was reported to be completed more than a year ago, so pre-production may be moving quickly.

The truth could be something deceptively simple — Kunis and Kutcher playing The Wonder Twins in a parody video? — or a total left turn — the work of a Banksy-esque conceptual artist? Either way, more is likely to come out about this sooner or later, and it’s probably premature to start camping out for opening night of “The Wonder Twins.”

Richie Janukowicz has been a cameraman, knight, web developer, farmer, graphic designer, telesales agent, carpenter, gardener and chef, though not necessarily in that order. He has been forced by Officers of Her Majesty to sign the Official Secrets Act. Twice. He possesses a deep and unwavering love for playing acoustic guitar, dissecting movies, reading fantasy and science fiction, superheroes (both real and imagined), martial arts and bacon. Right now he's trying to juggle a blossoming writing career with being a full time dad. He enjoys the challenge, but would like some more sleep.
You might also like
breakingmila kunismovie