previous
DC's Villain Month, How to lose friends and alienate people.
random
next
Violence, the media, and the eternal scapegoats: the US Senate and her never-ending battle with pop culture. Part 1

However the hell you are supposed to write it down, 10,000,000 (I’m going with that), the annoyingly-named and also extremely popular iOS game is finally coming to Android on March 14. That’s tomorrow for all you numeraphobics out there ($10 word).

In the game, you play an Indiana Jones-esque character trapped in a tower, and although the gameplay seems fairly standard (fight off various traditional RPG fodder, acquire loot, upgrade things); it’s the way you control your character via an intuitive Bejewelled-like match three game, which gives the game it’s appeal. Each tile, when matched, gives you some form of bonus or resource which helps you progress. Need to open a locked door? Match some keys together and you’re on your way. Need to upgrade a room? Better hope you’ve matched together enough resource tiles. 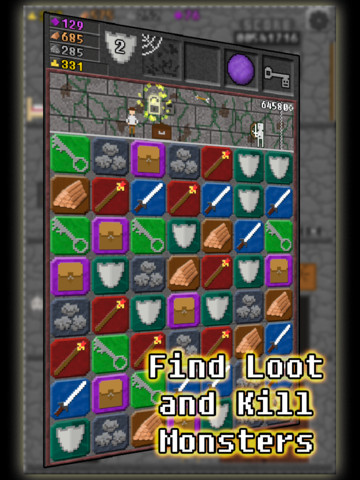 Despite how difficult it may or may not be to actually say; 10000000 was an instant hit when it launched on iOS back last year. This RPG/Action/Sidescrolling/Match-Three retro styled game has had many fans clamoring for an Android release for quite a while now; myself included. I’m definitely looking forward to getting my mitts on it, and now I once again have something to keep me from getting bored and reading shampoo bottles during my private bathroom time, I shall be uploading my thoughts on the game very soon, for the few people out there that still haven’t heard about this charming, 8-bit bundle of joy.

Matt, 24 last time he checked, was born and raised in Manchester. A self-styled geek; when he isn't annoying his other half by fitting in as much gaming time as he possibly can, he can be found getting his fix of Fantasy and Sci-Fi elsewhere by reading, writing, or watching TV Series and Films. He is also a Michelin 3-Starred Chef in his spare time, and can be found experimenting in the kitchen, and generally poisoning his friends with obscure and mysterious dishes.
You might also like
androidappApple