BBC’s Sherlock gets an air date

The wait is nearly over for Sherlock fans! BBC revealed that the new series of Sherlock is to première on the 1st January, making for an extra special New Year’s day for the fans who have been waiting nearly 2 years for the return of the detective.

As part of a publicity stunt to advertise the new series and the first episode, ‘The Empty Hearse’, a black hearse drove around London visiting a number of filming locations including Baker Street and St. Barts, which is home to the rooftop that Sherlock fell from in the series 2 finale. In the back of the hearse a flower arrangement showed ‘Sherlock 01.01.14’. 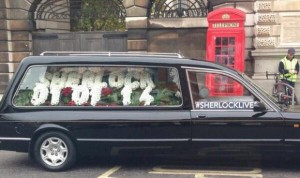 The dates of the second and third episodes have also been released with the ‘The Sign of Three’ due to air on the 5th January and the third episode, ‘His Last Vow’, following on the 12th January in the UK. The series will start slightly later in the US with PBS Masterpiece airing the first episode at 10pm on January 19th.

The third series is set to be filled with some huge moments including John finding out Sherlock is still alive, the introduction of Lars Mikkelsen as Sherlock’s new nemesis, the big reveal of how Sherlock faked his own death, which was a topic of great debate after ‘The Reichenbach Fall’ and, of course, John’s new moustache… or mournstache as it’s been nicknamed by some online fans.

I'm a movie lover of all genres, particularly comic book films, as well as some television shows such as Community. I enjoy fiction writing and blog writing and I sometimes dabble in reviews.
You might also like
BBCBenedict Cumberbatchbreaking