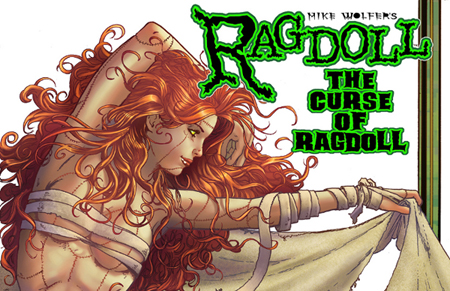 Mike Wolfer veteran writer and artist has worked on Lady Death, Warren Ellis’ Gravel Combat Magician and Garth Ennis’ Stiched amongst others and took some time out of his schdule to talk about his latest project, crowd funding a new book, The Curse Of Ragdoll.

Q: Avoiding spoilers can you give us a brief synopsis of what The Curse of Ragdoll is about? 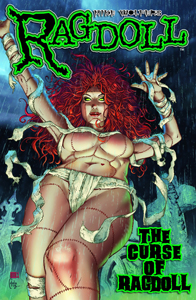 A: The Curse Of Ragdoll is a 96-page, fully gray-toned, black and white, Gothic horror comic, written and drawn by me, lettered by Natalie Jane, with colour on all covers and art prints by Ceci de la Cruz. If you think “Frankenstein Created Woman” meets “The Abominable Dr. Phibes” meets “Friday The 13th,” you’ve got ‘Ragdoll. The story is set in late 18th Century Europe, and details the mission of vengeance of a patchwork horror with supernatural origins. Having been stitched together from the corpses of many, many women who met untimely and tragic deaths, Ragdoll’s quest is to hunt down each killer of each woman from whom she has been constructed. It’s scary, sexy, gory and romantic, and has everything you’d find in a 1970s Hammer film, or EERIE, CREEPY or Vampirella Magazine.

A: I certainly have no qualms about creating adult material, or even “adults only” material; most of my work contains some aspect of sexuality. But I’m a realist, and since doing comics pays the bills, I always keep my eye on the marketability of a property. When the first incarnation of Ragdoll saw print, it was for an “adults only” comic anthology, so for the Kickstarter to have wider audience appeal, I decided to remove the “X” panels and do some rewrites to bring it down to an “R.” And a cool perk is that I’ve been able to go back and tweak the art, add totally new pages, and also create an almost entirely new chapter and a brand new ending. As far as the narrative is concerned, you’re absolutely right: The adult material was superfluous to the story. There are still strong sexual elements present, but there was just no need for gratuitous penetration shots. 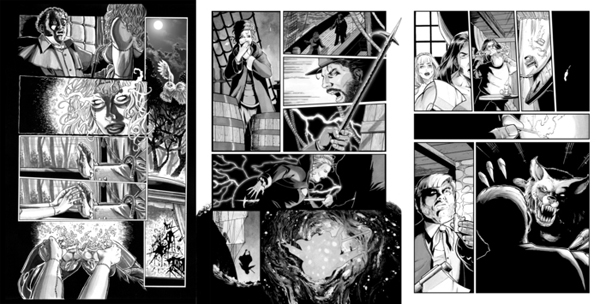 Q: Why did you decide on crowd funding for The Curse Of Ragdoll?

A: This has been a long time coming. I’ve been working for Avatar Press for almost 20 years, and have been handed some pretty sweet gigs (Friday The 13th, Night Of The Living Dead, Lady Death, Warren Ellis’ Gravel Combat Magician, Garth Ennis’ Stiched). But I’ve also been trying to sell them on creator-owned projects, without luck. So I figured, what better way to test the waters and see what kind of fan support I have than to try a Kickstarter for an existing series which practically no one has seen, or even heard of? So I give this one a go, and if it works, it gives me a possible option for self-publishing those projects I’ve been unable to sell to a publisher. As I’ve found in the first day of the launch, I’ve got some incredible fan support, and in the first 24 hours, I’ve already reached 73% of my goal (with 29 days still to go).

Q: There are various rewards available for backers, can you tell us a little about them? 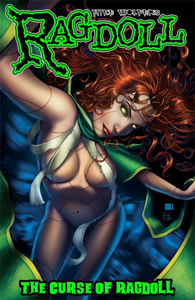 A: For my first Kickstarter, I’m going very basic. I’ve heard all of the horror stories about how creators have gotten in way over their heads by offering too many rewards which require a huge amount of coordination and production, and inaccurately projected shipping costs which have been complete nightmares. What I’m offering are books, books, books, a little original art, signed and numbered and head sketch editions, and t-shirts. For stretch goals, I have three 11″X17″ art prints planned if we break $6k, $7k and $8k. The Curse Of Ragdoll itself will be available in a Retail Edition, and two Kickstarter Exclusive Editions, the Regular and the Art Deco cover variants. I’m also making the book available in a digital PDF format.

Q: There’s a lot of graphic novels that utilise crowd funding before eventually ending up in comic shops , are there any plans to make this book available outside of this campaign?

A: I have been looking into making arrangements for digital distribution, and I’ll probably look into regular comic shop distribution in the future, but for right now I’m only doing Amazon.com and mail order, as well as selling the book at conventions. The whole point of doing the Kickstarter is to raise the funds to print a slew of books which I can sell over the long haul, and always have in stock to make available to retailers or distributors.

Andy Haigh started writing to counteract the brain atrophying effects of Retail Hell, now it's an addiction. Andy is an unrepentant sequential art absorbist and comics are one of his passions. Other interests include Film, Music, Science Fiction and Horror novels and quality TV like Game of Thrones. He can talk about these at great length if only someone would listen. He lives a somewhat hermit like life in The Shire, spends too much time on social media and is still waiting to go on an adventure.
More Goodness
comicsCrowdfundingIndie Comics