In a little over a week Soaring Penguin Press will be launching their Kickstarter campain for The Glass Wall, their upcoming publication. This move comes on the heels of the revelation that only 13% of creators earned their sole income from comics. Soaring Penguin Press want to reestablish the balance and provide content creators with a fair wage for their work.

This Kickstarter campaign will launch on Thursday, the 1st October at 13:00 GMT/08:00 EST, and will end on Tuesday, the 27th of October. To quote their recent press release, “The Glass Wall is a powerful and electric debut,” added co-publisher Tim Pilcher, “and this Kickstarter campaign’s success will not only provide substantial up-front payment for creators William Robertson and Yulia Lapko, but will help set the precedent that will allow Soaring Penguin Press to showcase new creators while paying them a fair wage. The more supporters there are, the more the creators make directly.”

The minds behind The Glass Wall are William Robertson and Yulia Lapko, who, united by their shared love of art decided to bring this comic to life, illustrating the daily existence of a millenial drifting through life. And we all know that feeling, don’t we? Below you can see a small sample of what you can expect when the comic is out. 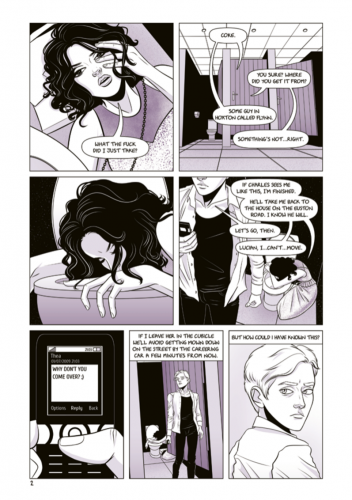 We will keep you updated about the launch of the campaign, however, in the meantime, just know that among the available rewards, you can find original art by the artist Yulia, T-shirts, signed prints, and an original soundtrack album for the book recorded by the writer, William Robertson. For more information, click here http://spengu.in/GlassWallKs

What's there to say about me? I love the sci-fi and fantasy genre when I read, but I am in no way limited to that alone. I do think Frank Herbert deserves a statue for his writing(if there is one, point me in that direction, please). I enjoy writing quite a lot, but I am also kinda lazy. If you want to make me happy give me books or Doctor Who collectibles. Or a real TARDIS, in which case I will love you forever.
More Goodness
Crowdfundingsoaring penguin press