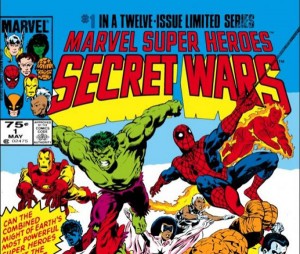 If you’re reading these words then chances are you probably know what I’m referring to.

Back in the mid 80′s a fan favourite idea of a story featuring numerous Marvel characters appeared, based around supremely powerful being, The Beyonder, transporting a whole host of characters to a distant planet in order to do battle with each other.

This wasn’t just written due to requests from fans of course but rather propped up by Mattel who wanted something spin a toyline off .

Secret Wars, written by Jim Shooter, was a smash hit and also one of the earliest examples of a major ‘event’ in comics, appearing before DC’s Crisis on Infinite Earths with it’s far more convoluted plot.

Keen to capitalise on a winning formula a sequel soon turned up in the shape of Secret Wars II.

Many look back on Secret Wars for being a milestone, a good story and featuring great art too. 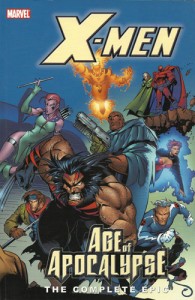 Age of Apocalypse from the mid 90′s is another fan favourite event.

Set in alternate timeline (now altered to a different Earth) where Professor Xavier died protecting Magneto from Legion, his son, who travelled back in time to kill Magneto. Despotic mutant Apocalypse chose this moment to strike and soon plunged the world into an age of darkness and brutality with Magneto forming the X-Men in Xavier’s memory and a pitched battle for the survival of humanity is played out with alternate versions of numerous characters from the X-Men franchise.

Beast is re-imagined as a Josef Mengele inspired sadist with a love for genetic experiments and Cyclops is one of Apocalypse’s lieutenants amongst the many changes to characters in the regular X-Men titles .

Age of Apocalypse is arguably one of the darkest entries in the whole of Marvel’s history which speaks to it’s continuing popularity.

Age of Apocalypse replaced every comic in the X-Men franchise for a twelve month period.

The big difference between Age of Apocalypse and the numerous following events from Marvel which include, Onslaught Saga, Eve of Destruction, Avengers Disassembled, House of M, Decimation, Annihilation, Civil War, Messiah Complex, One More Day, Secret Invasion and the recent Avengers Vs X-Men just to name a few is that it had relatively little impact on the ‘regular’ titles when it finished.

Characters dying in events is now so commonplace it’s become a cliché with press releases often stating a character death as a means to generate sales and interest but the only thing more cliched than these deaths is that they almost never last.

Remember the death of Superman?

Or the death of Captain America?

Human Torch’s death was announced too

Worst than the predictable and cliched deaths in these events is the way that comics especially from Marvel and DC are built around them now and if you’re not a fan of them, well, it’s pretty hard to avoid them.

The double edged sword that presents itself is this, whilst these events give the potential for great stories and with a much wider scope than the regular titles would allow, readers of the comics involved often find themselves having to pick up numerous extra titles just to make sense of a story. This can alienate readers, worse than that though is titles can be cancelled altogether or ‘relaunched’ in the aftermath.

The idea that the comic you just picked up might get dragged into some sprawling event has become more of a reason to not pick something up rather than something you look forward to.

Of course the worst of all is when the fallout from a ‘major event’ gets completely undone a few short months later rendering the whole thing rather pointless.

Whilst DC and Marvel continue on with their events with DC’s latest being Death in the Family a sprawling Batman event taking in numerous titles along with the core story and resulting in, shock horror, a character dying other publishers have managed to pull off events without alienating scores of readers.

Artifacts from Topcow/Image from Ron Marz is a sprawling epic featuring a whole host of characters from numerous titles but importantly the regular titles carried on alongside it and for the most part were unaffected.

Writer Ron Marz was actually adamant on it not requiring readers to pick up a pile of titles every month to make sense of things.

we want to continue to have Witchblade and The Darkness stand on their own for readers who’re just reading those individual series. We’re pretty confident we can pull it off, and there will be reflections in some of the monthly books but we want to stay away from forcing readers to buy the entire storyline. When we say it’s a thirteen issue miniseries, that’s what it is; people can read it just as that, or follow the characters to their own series.’

With Marvel and DC’s continuing reliance on event stories it begs the question at what point does event fatigue set in?

At the time of writing this Marvel has had the X-Termination event come to a close resulting in the end of the new Age of Apocalypse comic from David Lapham and X-Treme X-Men whilst the further reaching Age of Ultron takes over seven different titles with 19 issues in total including Fearless Defenders despite it only being that titles fourth issue.

DC has just had Death in the Family come to a close and now has Wrath of the First Lantern at 4 titles and 12 issues and Trinity War will feature in 3 titles over 6 issues and is already being promoted with the line that a “hero dies”.

Does anybody even care about characters dying anymore given that chances are they’ll be back on their feet in a matter of months through some plot device or other?

Andy Haigh started writing to counteract the brain atrophying effects of Retail Hell, now it's an addiction. Andy is an unrepentant sequential art absorbist and comics are one of his passions. Other interests include Film, Music, Science Fiction and Horror novels and quality TV like Game of Thrones. He can talk about these at great length if only someone would listen. He lives a somewhat hermit like life in The Shire, spends too much time on social media and is still waiting to go on an adventure.
You might also like
age of apocalypsecomicsDC