This past Father’s Day weekend in the US also marked the fifth annual Denver Comic-Con in Denver, CO. I have attended this event every year since its inception, and each year, the event has grown exponentially bigger than the last. This year was no exception.

DCC has quickly become one of the biggest events of its type and was reportedly the third largest last year (numbers are still coming in for this year), and is the single largest non-profit event, put on by Pop Culture Classroom, which you can find out more and how to donate right here. Anyway, I thought I’d take the time to discuss my experience at the convention, taking a look at each of the three days I attended.

Generally, the first day, my family and I just wander around the floor, checking out the tables and the artist. We did have one photo-op scheduled, but beyond that, it was all about just taking in the spectacle.

A panoramic shot of the crowd waiting to get in.

A panoramic shot of part of the main convention floor.

While exploring the tables and taking in the sites, I took the opportunity to get some books signed by some of the artists. We got a stack of Buffy: The Vampire Slayer and Serenity comics signed by Georges Jeanty (Side note: If you have an artist sign more than 10 books at a convention, and they aren’t charging you, you’re a douche), as well as Castle: A Calm Before the Storm signed by Robert Atkins and Civil War: Frontline signed by Joe Lieber.

After a couple hours, we went to the celebrity section and got in line to meet John Barrowman, who was signing autographs and selling copies of his two books, Hollow Earth and Torchwood: Exodus Code, which he coauthored with his sister, Carol. These books are not available outside of the UK except through John at conventions, so we had to get at least one. After signing a copy of Hollow Earth and talk to John for a bit, he wouldn’t let us leave the table until he felt my arms. After having me flex (and getting a “Wooo!” from the crowd), he had his husband, Scott Gill, join in as well. Scott was embarrassed a bit, but he conceded. Let me tell you, gay or straight, there’s nothing more flattering than having John Barrowman and his husband hit on you. More on them later, as well as in parts 2 and 3 of this series.

Back to the floor, as it was story time for the kids. Each year, Denver Comic-Con, which has an entire area just for the young ones, has one of the celebrities read a children’s story to the kids. Last year, Patrick Warburton read the most dramatic reading of Green Eggs & Ham you’ve ever heard. The year before, Adam West did the honours, and the year before that, William Shatner. This year, if you guessed John Barrowman, collect your prize.

After blowing me a kiss off-stage (no, really), Barrowman read the book Dragons Love Tacos and an excerpt from the aforementioned Hollow Earth. John was a big hit with the kids and was extremely fan-friendly throughout. 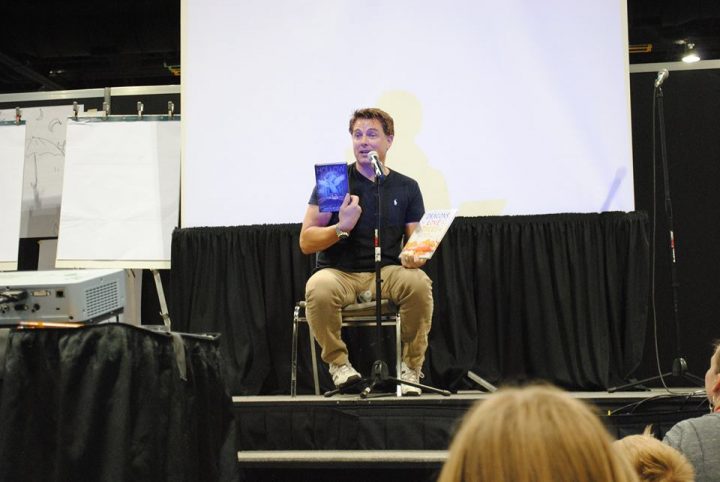 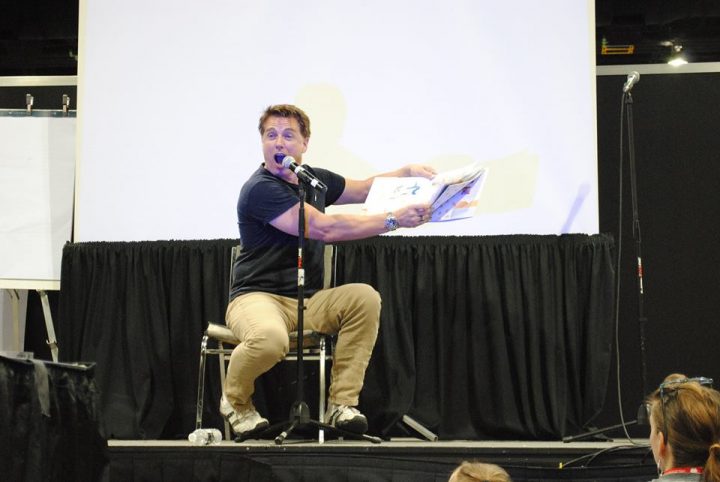 After the reading, we went back out to the floor, where I proceeded to run into John and Scott several more times throughout the day, getting a friendly grope or two from both of them each time. My daughter Teagan also received a hug. She had asked for one in his autograph line, but he declined due to everyone likely asking for one if they saw and only having so much time before he had to do other things at the convention, such as the book reading. However, he promised her if she saw him out on the floor, she could ask for and receive a hug. Man of his word, he made her day with a great big hug.

Back to the celebrity area, DCC did a Karate Kid/The Outsiders reunion this year, and one of the cast members, William Zabka, was present. You might know him better as “Johnny Lawrence” or “every bully in every 80’s movie”. I’ve often said that the people who play the biggest asses in movies and TV shows are probably the nicest people in real life, and I wasn’t proven wrong. Zabka was extremely friendly and had a nice chat with us, talking to our daughter before showing us some photos of his son and telling a couple stories. We got our picture with him, and I also had him sign my Johnny Lawrence POP collectible. 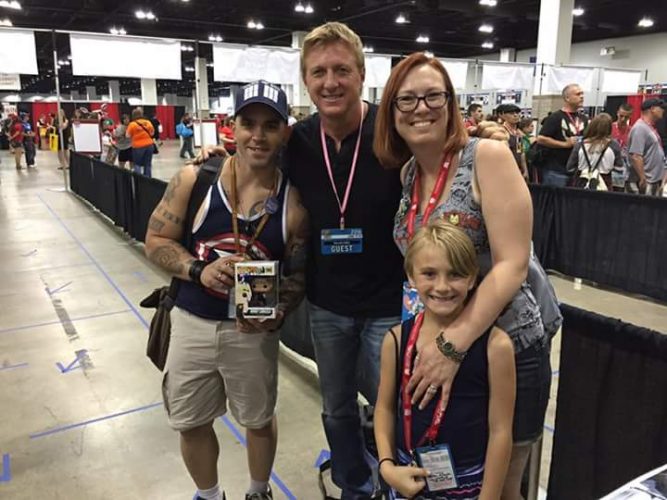 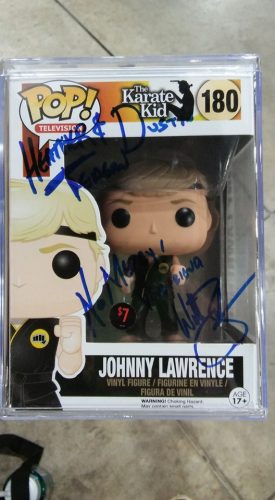 After walking the floor a while longer, it was time for our one photo-op of the day, which took place at the very end. This was something I had been waiting for my entire life, as the photo-op was none other with the one, the only, the Generalissimo himself, Stan Lee. This is reportedly his last year of doing conventions, and we booked our photo-op in advance because no way in hell were we not meeting him. Lee was supposed to be at our event in 2013, but had to cancel in order to shoot his cameo for Thor: The Dark World, and Pop Culture Classroom has been trying to get him to come back ever since. This year, they made good. He was there for the entire weekend, doing autographs as well as a panel and was a huge hit with everyone. 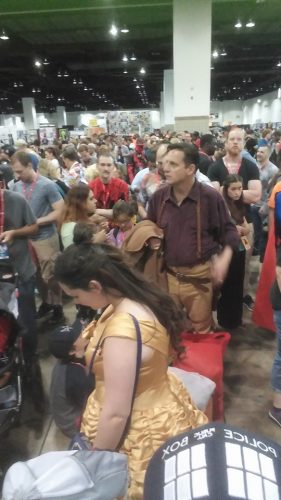 The line behind me for Stan Lee photos.

When we went for our photo-op, we were told not to engage in long conversation with him. Standard procedure for photo-ops, but given his status, it was even more understandable. I didn’t get to talk to him, sadly, but still got to say “hello” and “thank you”, which was more than enough for me. 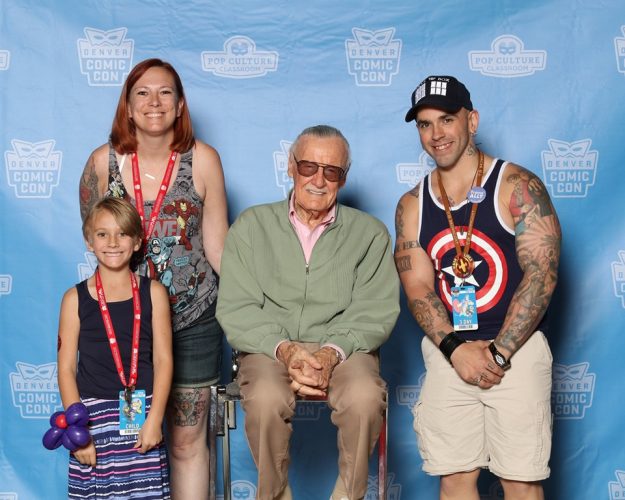 All in all, a very successful, eventful day that was a ton of fun. What could possibly top all of this? Find out tomorrow!

AUTHORS NOTE: Despite Lee repeatedly stating this is his last year doing conventions, during a panel hosted by Clare Kramer, he announced he would be back in Denver again next year. Take that for what it’s worth, folks.

I am straight edge and a freelance writer currently working for several sites. I also do personal training. Currently, you can see my weekly WWE Smackdown recaps on CamelClutchBlog.com, video game reviews on BurningAngel.com (warning: although I only write game reviews there, it is an adult entertainment site) and mostly wrestling-related stuff on Man Cave Daily (mancave.cbslocal.com).
You might also like
Buffy the Vampire SlayerCastleCivil War