previous
Hercules Could be Dwayne Johnson's Biggest Film yet as Trailer Arrives
random
next
First trailer for Michael Bay's Teenage Mutant Ninja Turtles appears, brace yourselves.
Film and TV
1 like

Great story, playing into new territory with fantastic performances from the main cast and action that'll blow your head off.

Dips slightly towards comicbook cliche at times but overall, it doesn't detract particularly.

Go and see this film right now. Do not continue reading, do not check cinema times, just go. If you are still reading by this point then you’re doing it wrong because I honestly cannot convey to you enough just how much you need to see the Captain’s second solo outing.

Still here? Well I guess I’ll give it a go then. The problem with Captain America is that he’s a goody goody. Much like Superman, he’s a character that is hard to create emotional engagement with due to the simple fact that a boy scout is hard to create emotional depth with. As a result, the first Captain America film, The First Avenger, wasn’t exactly the fastest horse to come out of the Phase 1 stable. While it was certainly better than I expected it to be, compared to the likes of Thor and Iron Man, it just didn’t have that “oh my god that’s cool” appeal. Apparently Marvel are aware of this because with The Winter Soldier, they have not just hit the ball out of the park but sent it stratospheric. Every element of the film is a step up, with the story more interesting, the acting broader and the action bigger. 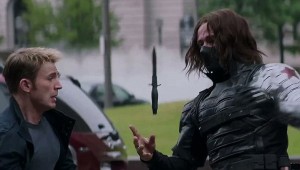 The Winter Soldier is based off a comic of the same name that sees Captain America go up against a metal armed assassin whilst embroiled in all sorts of other intrigue. The film steps this up to a ultra-contemporary setting with all sorts of questions about freedom of information and governmental control. Considering the recent investigations into NSA spying and the revelations of Edward Snowden, such themes play out in a wonderfully relevant, ultra relatable narrative that is leagues ahead of Cap’s previous film. If The First Avenger was a war film, The Winter Soldier is a spy thriller that plays on all sorts of nasty insecurities and paranoias without ever losing the grip on its superhero origins.

And my oh my, they are heroic. Chris Evans returns as the disturbingly ripped Captain America and manages to bring everything that could be hoped for. A man out of time, a patriot who can no longer recognise his own country, a soldier without a straight-forward war. Evans plays him to pinpoint perfection, nailing all the confusion and anger that you’d expect from a guy so out of place while simultaneously managing to avoid slipping into brooding. On top of which, the guy just exudes heroism. I mean there’s a couple of real “hero” moments of inspiration that hit square in the feels. And ably bringing up the rear is the simply wonderful Scarlett Johansson as Black Widow. Anthony Mackie does a 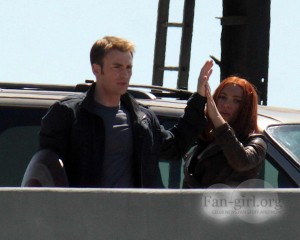 great job as new guy Falcon but it is Johansson that really steals the show. Considering a performance that expands on everything we’ve previously seen of the character, giving us even more of the femme fatale we know and love, it’s hardly a surprise the Widow is being considered for a solo film.

I’ve got to say, Winter Soldier went above and beyond the line of duty, completely outmatching it’s predecessor and stepping up to the top ranks of the Marvel roster. The villain is badass, the story is current and exciting and if you don’t get excited by seeing the Cap and Widow take apart the badguys with the kind of stylish grace that only a supersoldier with a vibranium shield and a superspy with gymnastic moves that seem to defy physics well… you may just be a little broken inside.