previous
Electronic Cigarettes – The Future of Smoking?
random
next
Say it ain't so! JJ Abrams rumoured to be leaving Star Wars VII

In news that will no doubt enrage fans of Wonder Woman who is apparently too ‘tricky’  to bring to film for the foreseeable future, 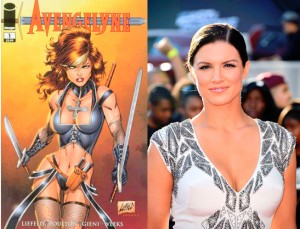 Avengelyne is a warrior angel created by Rob Liefield and Cathy Cristian in the mid 90’s.

Liefield and it’s proposed star Gina Carano are ‘reconceiving and rebuilding’ the character for the film which “is intended to be in the vein of Underworld.”

The irony of course being that Carano has often featured in fan speculation as to who would play the most well known female superhero in comics.

Andy Haigh started writing to counteract the brain atrophying effects of Retail Hell, now it's an addiction. Andy is an unrepentant sequential art absorbist and comics are one of his passions. Other interests include Film, Music, Science Fiction and Horror novels and quality TV like Game of Thrones. He can talk about these at great length if only someone would listen. He lives a somewhat hermit like life in The Shire, spends too much time on social media and is still waiting to go on an adventure.
You might also like
breakingcomicsFilm