Electronic Cigarettes – The Future of Smoking? 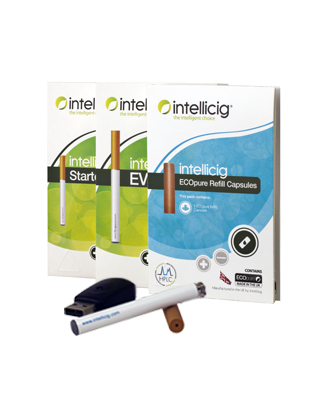 Electronic cigarettes are becoming a more common site across the UK. An article published by the BBC at the beginning of the year predicted that the number of people using e-cigarette devices will reach over 1 million this year. A recent study by Citibank Investment Group cited electronic cigarettes as one of ten technologies predicted to change the business world.

So with more people choosing to ‘vape’, what exactly are electronic cigarettes and how do they work?

E-cigarettes are battery powered devices which heat a water-based e-liquid solution that sits inside the device until it reaches a high enough temperature to turn into a vapour. Users can then inhale and exhale the vapour in a similar way to smoking a conventional tobacco cigarette. There are a wide range of different e-liquid solutions available with varying nicotine strengths and flavours on offer.

Electronic cigarettes do not contain tobacco and are not affected by the UK smoking ban. Legally they can be used indoors and in situations where tobacco cigarettes are banned, however individual companies have the power to decide whether or not to allow them indoors in their establishments. People who use them are often referred to as ‘vapers’, the term comes from the vapourised e-liquid solution which is inhaled by users.

E-cigarettes have featured heavily in the media and press recently because of the decision to regulate them as medicinal products. The new regulations will come into effect in 2016 and products will have to meet criteria proposed by the Medicines and Healthcare Products Regulatory Authority (MHRA). Chief Executive of charity ASH, Deborah Arnott explained “Regulation will ensure that e-cigarettes meet the same standards of quality, safety and efficacy as medicines, while remaining as readily available to smokers.”

The electric cigarette was originally invented in 2003 by Chinese pharmacist Hon Lik. Hon was inspired to design the e-cigarette after his father, who was also a heavy smoker died from lung cancer. Hon is credited with creating the first generation of electronic cigarette technology. He began exporting his devices overseas and his design still forms the basis for products on the market today.

The technology behind e-cigarettes comprises of three main parts. The lithium battery, vapour device and refill capsule or e-liquid chamber. Electronic cigarettes are available as both disposable models designed to be thrown away once all of the e-liquid has been vaped and rechargeable models which can be refilled. The battery heats the atomiser component which sits inside the vapour device and is responsible for heating the e-liquid solution until it becomes a vapour. The refill capsule holds the e-liquid solution and in many models also acts as the mouthpiece through which to inhale the vapourised liquid.

E-cigarette technology is constantly been developed to offer users an enhanced vaping experience.  It is a rapidly growing market and one that is predicted to continue to expand quickly over the next few years.

[box_dark]Note that the above article is a sponsored story and has been written in collaboration with intellicig… we have to pay our bills somehow![/box_dark]