previous
Marvel Vs. DC: War of the Movies
random
next
Electronic Cigarettes – The Future of Smoking? 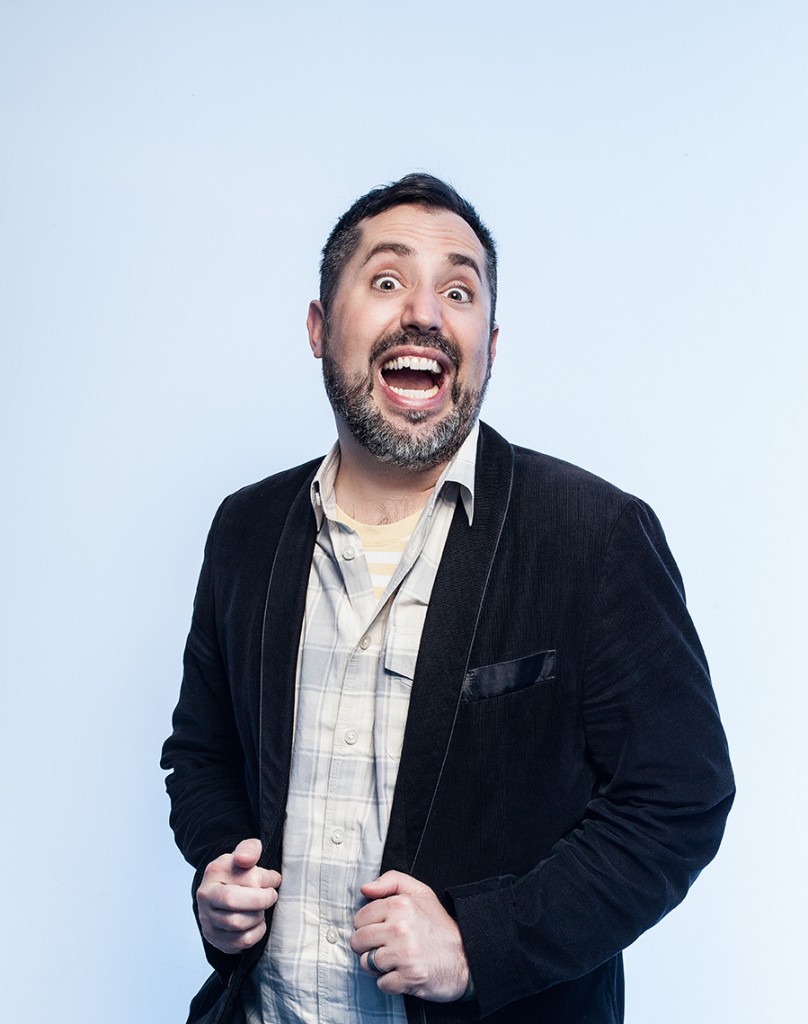 Brian Andersen is the creator, writer and original artist of So Super Duper, the story of a young superhero blossoming into a beautiful gay man. Camp as a row of tents, sure, but with hidden depths that will take you by surprise, it’s self-aware without being self-deprecating- though you will need a few cups of coffee to keep up! Andersen himself is one of those people whose voice you can hear in your head while you’re reading, starting with a “Hiiiiiiiiii!” that wouldn’t sound out of place in an opera. Note how, in the following interview, I successfully refrain from begging him to be my BFF. That, my friends, is professional journalism.

I just finished So Super Duper and LOVED it. I laughed, I cried (seriously! real tears!) I squeed, it was an emotional rollercoaster.

Wow, what a compliment! Seriously. So nice! I’m overjoyed that you liked it so much.

First question *tense game show music*… You funded the production of So Super Duper through Kickstarter- how did you find the experience? Is it something you’d recommend to other fledgling comic book writers?

Yes, I sure as shiz-nit did and I feel very honored and blessed – and hella freaking lucky – to have so many nice people donate to my book. There’s something to be said for people who open their wallets to support something you created – like a little comic book that’s your baby, your dream, something that took blood, sweat, tears and midi-chlorians. It’s certainly some kind of wonderful.

And yes, I would so totally recommend it, for sure, as long as you feel you:

a) Have a good project (something that’s not just a half-completed, half-baked vanity project – like mine). I would say have a completed book finished and done before you beg…uh…ask for people to give you some tuppence (shout out to MJ Poppins, yo!).

b) Have a decent following, it’s a challenge to get my own darn family to give me cold hard cash for anything much less ‘a silly comic book’ as my mother would say. So make sure you have people who are aware of you and your work and (hopefully, fingers and toes and ovaries crossed) like your work. Loving your work would be ideal. Those are the peeps that are most likely to donate to you.

c) And finally, you need some way to get the word out about your campaign. Lot’s of awesome Kickstarter campaigns fail to meet their goal. So you’ll need to do some hardcore hustling to get your project funded.

Just because your project is on Kickstarter doesn’t mean the scrolla just starts crashing in and you can dive into a sea of coins like Scrooge McDuck. You’ll need to email, call, Facebook, Twitter, Instgram, Vine, SnapCatch, carry pigeon, smoke signal, whatever it takes to get the word out. As the mighty RuPaul once declared so eloquently; “You better work!” 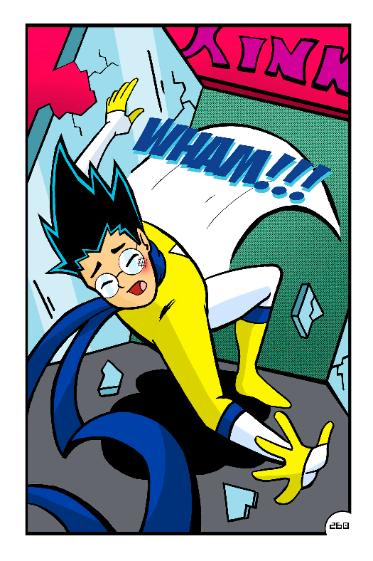 That’s some impressive dedication right there! You’ve got another four comics on the go as well as promoting So Super Duper!- how do you do it? Do you set aside time for each comic, or just flit from one to another as the whimsy takes you?

I’m secretly a mutant with six arms, much like my scissor sister, the sinister Spiral. So I can pet my cats, type two stories, draw a little and do unspeakable things to my boyfriend all simultaneously. It’s quite nice.

Actually, my old “real world, 9 to 5” job was super boring and dull so I had oodles of time to write. When you’re stuck at a desk for 8 hours at a time it’s pretty easy to write your fanny off. Now that I have to work at my new work I’m not so multitasking, and I have to focus on one project at a time. Blah.

It also helps to love comic books and love writing them. Writing is scary and thrilling and awesome and wonderfully challenging all at the same time. But if you wanna be a writer you gots to just write, hunties!

I’m so glad you mentioned mutants, as that helps me effortlessly segue into my next question. And they told me journalism was hard! In recent years, there’s been a huge influx of gay heroes in mainstream comics. Which ones are your favourites, and which ones would you kill if given the chance?

I honestly think I like them all. It’s amazeballs to have so many gay characters running around in comics, from mutants, to Green Lanterns, to Teen Titans, to pseudo Superman and Batman archetypes, it’s a terrifically stellar time to be a gay geek reading comics.

If I was forced to pick a favorite and save one (just one!?!) from the comic book guillotine I’d have to go for Northstar. The poor boy had to wait decades for his first on panel gay man-on-man smooch he deserves to bask in the glow of all the current pro-gay love in the comic book medium. And I wouldn’t kill any of them, because most gay characters get introduced and then quickly killed already (see “Fearless Defenders” #6.) 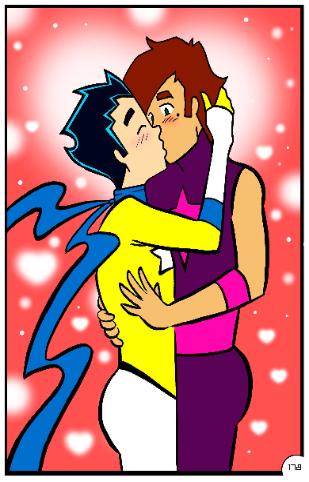 If Annabelle doesn’t come back to life as one of the Valkyrior I will be so mad. On a related note, why not, if you were set loose in the Marvel and/or DC offices to create comics, which characters would you want to write, and what would you do with them?

I can’t dare dream of anything more wondrous and magical then being asked to play in the Marvel or DC sandbox. It would be the fulfillment of all my idiotic childhood longings and most fervent adult dreams. I’d take any job they offered me. ANY. Heck, I’d write any character if it meant getting my fat, pudgy foot in the door, and I mean ANY character, even – Hera help me – D-Man or Ambush Bug.

But if I could pick a project I’d love to do a team up book with a fierce, strong female character – like say Dazzler or Fire – and a gay dude – Northstar or Obsidian. It might sound stereotypical and too “Hollywood,” the whole girl with a gay best friend bickering and having fun, but you haven’t seen a lot of it this story trope in modern comics and I would love to add a fresh, fun, action packed take on it.

That or I’d want to write any solo female title. I don’t care what or who or why or what editorial directives were forced on me. I’d love to write the adventures of a female character, one that isn’t defined by the man she dates or the men in her life. Sisters being doing it for themselves! What, what!

Who or what would you say are the biggest influences on your writing?

My boyfriend (of 12 years and counting) constantly makes fun of me for mainly (only) reading comic books. I mean, how rude, he’s totally and completely wrong. As if! I do also read magazines on occasion. And there was that one time I read that one novel this year, from cover to cover even. But mostly, yeah, I suppose, I do only pretty much read comics (I hate when he’s right). So what if I live and breathe comic books – since when is that a crime?

I have oodles of writers I admire and look up too, and will often chase down any and everything they write. Mostly I love writers who bring something unique to a story. That extra something special usually found in a talented writers own personal writing voice. I’d much rather a grating and challenging writing voice than a generic, toothless one that is bland and emotionless.

Any writer who can bring something new and fresh to the typical superhero story is a champion in my eyes, because, let’s face it, with 30 years of comic book reading experience under my belt I often feel like I’ve “seen it all.” Keeping 50+ year old characters interesting and engaging is no easy feat.

OK, one last question and I’ll let you get back to creating wonderful things! What can we look forward to next- any plans for a sequel to So Super Duper?

I’m presently taking a bit of a break, just relaxing my wary, tiny, iddy bitty mind. But I will finish my epic Oz inspired gay superhero-y story “Friend of Dorothy” first. Then onto a few other new projects that have been stewing around in my – aforementioned – iddy bitty mind of mine.

I’m also keen on doing a follow up with my “So Super Duper” characters but I’d like to cast them in a more real world, realistic light (Meaning with a quality, talented artists that can actual draw instead of my own meager efforts). Not so cartoony but more mainstreamy superhero-y meets slice-of-lifey. If that makes sense (which I’m sure it doesn’t, but whatevs.)

I’d love to explore what happens after two superheroes fly off into the sunset holding hands with their intended soul mate. What kind of fights do they have? How do they stay into each other physically, does the sex get boring? Do they get fat? And as superheroes how does love and the daily grind of life fit into it all?

Since my (handsome, wonderful, sexy) boyfriend and I are having a baby next year via surrogate I’d like to also see what happens when two male superheroes tackle that process. I feel a Pulitzer prize is on my horizon once I finish this epic tale. Can’t wait!

You can (and should) check out previews of So Super Duper!, among others, at www.so.superduper.com, and you can listen to Brian talking about things at www.thex-gays.com. 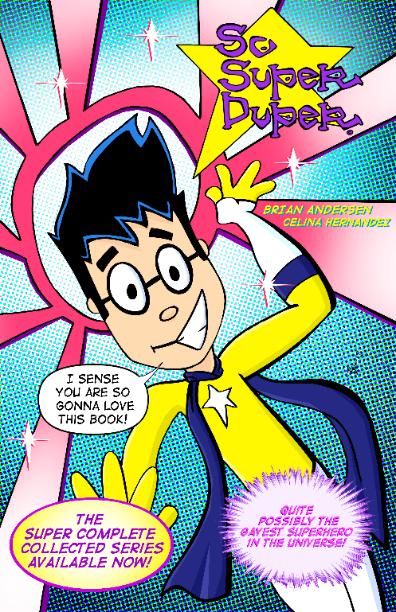 At the time of character creation, Laura Maier made the mistake of putting all her points in charm. While this was probably an unwise decision, it's served her well so far. Her power animal is the platypus.
You might also like
comicskickstarterlgbt