It may have been two years since fans saw Jude Law as Dr. Watson alongside Robert Downey Jr as Sherlock Holmes, but good news comes today as Jude Law sheds some light on the third film. 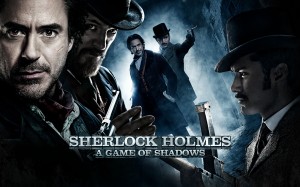 The film hasn’t been officially confirmed as of yet but Law told Digital Spy that a meeting took place earlier this year and he thinks that “[the script’s] being written now”. Warner Bros. hasn’t agreed to fund the film yet but the actor said “I think they want to!”

Guy Ritchie has signed on to direct the third film, basing the production in Los Angeles, and producer Dan Lin confirmed that Iron Man 3 writer Drew Pearce is penning the script. So although it may be too early for fans to start getting excited, there’s definitely light at the end up of the tunnel, although who knows how long the tunnel will be…

I'm a movie lover of all genres, particularly comic book films, as well as some television shows such as Community. I enjoy fiction writing and blog writing and I sometimes dabble in reviews.
You might also like
filmsmoviesnews