previous
Super Kitties
random
next
Used Games: Does The Last of Us offer a glimpse into the future of PlayStation?

Maverick writer and film producer Mark Miller, creator of Kick-Ass, has gone all establishment after being awarded an MBE, that’s Member of the Most Excellent Order of the British Empire for those who don’t know.

The Herald Scotland reported that Millar gained the recognition for his services to literature and drama. Originally from Coatbridge in Lanarkshire, the graphic novelist  has written for publications such as 2000AD, Superman, and X-Men. His own creation, Kick-Ass, was turned into a feature film in 2011. 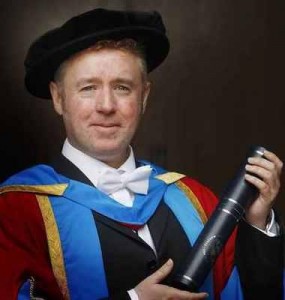 The honour came as a surprise to Mark, who now splits his time between Glasgow and Los Angeles;

“These kind of honours you usually see going to other people, so it’s nice. I got an honorary doctorate last year so I am starting to feel very respectable. I want my kids to write MBE on my father’s day card.”

Miller said he wasn’t sure how he would celebrate but may dedicate a drink in the pub to his latest achievement and admitted he is looking forward to visiting Buckingham Palace with his partner.

Millar is warming up for the release of Kick Ass 2 later this year, starring Jim Carey, with a further project Secret Service also on the horizon.

Richie Janukowicz has been a cameraman, knight, web developer, farmer, graphic designer, telesales agent, carpenter, gardener and chef, though not necessarily in that order. He has been forced by Officers of Her Majesty to sign the Official Secrets Act. Twice. He possesses a deep and unwavering love for playing acoustic guitar, dissecting movies, reading fantasy and science fiction, superheroes (both real and imagined), martial arts and bacon. Right now he's trying to juggle a blossoming writing career with being a full time dad. He enjoys the challenge, but would like some more sleep.
You might also like
breakinggraphic novelKick Ass