previous
Is it helpful or not? Sweden is determined to add a Bechdel test rating to the movies played in cinemas
random
next
Another Wolverine Film?

Latest News, Pre-order Deals and More for The Legend of Zelda: A Link Between Worlds 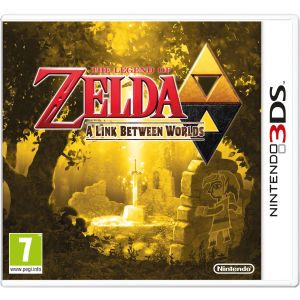 With November in full swing and less than three weeks to go until the eagerly anticipated new release in The Legend of Zelda series, Geek Pride are here to bring you the latest news, pre-order deals and information on limited edition goodies for the upcoming game.

Released on Friday 22nd November, The Legend of Zelda: A Link Between Worlds follows on from the iconic 1992 SNES game A Link to The Past. The new game will be set in the same world as A Link to the Past but feature plenty of awesome new features.

The biggest of these is Link’s new ability to take on a 2D appearance as a ‘drawing’ which allows him to move along walls. This ability will be utilised to bring a whole new element to the game which will create plenty of new puzzles. Another key feature is the option to choose in which order you will tackle the dungeons, something new to the series. All of the items needed to tackle the separate dungeons will be available from a shop very early on in the game, allowing players to decide the order in which to complete them.

Now that I’ve given you a reminder of what to expect in A Link Between Worlds, let’s take a look at some of the fabulous things on offer when buying or pre-ordering the game; including a limited edition console, cool sleeve design and the cutest preoder freebie I’ve ever seen.

To celebrate the release of the new game, Nintendo have created an absolutely beautiful limited edition console. Available from the Nintendo Online Store for £199.99, this limited edition 3DS XL also comes with a download code for The Legend of Zelda: A Link Between Worlds. The console really is gorgeous, especially to huge Zelda fans such as myself. The top part and interior of the console are in the iconic gold colour, with the bottom half in black and a Triforce on each part. When the console is open, this gives the effect of a double Triforce, forming the logo of the game.

I’m already the proud owner of a lovely Pikachu 3DS XL, otherwise this would definitely be on my Christmas list! It really does have a great design, even more so than the console made available for the Ocarina of Time 3DS release. You can pre-order this awesome limited edition release at the link below. 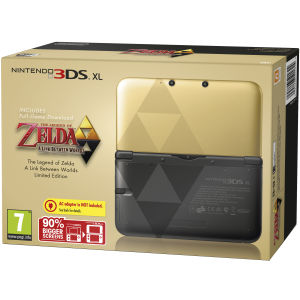 There was a really cute video posted recently on Nintendo’s Twitter showing Zelda overseer Eiji Aonuma unveiling the fabulous exclusive item being given away to folk pre-ordering the new game. If you missed it, Nintendo announced that anyone pre-ordering the new instalment through GAME will receive a cute musical chest that stores game cartridges. When you open the little chest it plays the classic tune associated with the game. Apparently you will also receive the item when pre-ordering through the Nintendo Store as well, so it’s worth taking a look as I’m sure stock won’t last. However, if you read on, you’ll see why I recommend pre-ordering through GAME. I’m absolutely in love with this little freebie, so if you’re going to buy the game I highly recommend pre-ordering a copy. 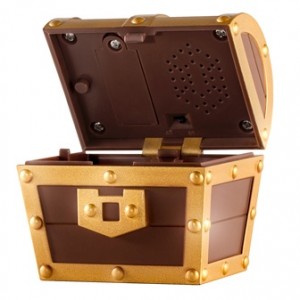 The Legend of Zelda: A Link Between Worlds Collector’s Edition – GAME Exclusive 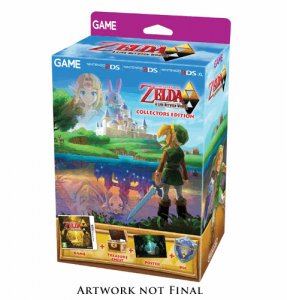 This edition guarantees one of the charming little musical chests, a boxed copy of the game, an exclusive poster and a download code for Link’s Awakening DX. Okay, the collector’s edition isn’t spectacular, but I’m a huge Zelda fan and I’ll definitely be pre-ordering a copy!

As a final treat for seasoned Zelda fans, The Legend of Zelda: A Link Between Worlds will come with a reversible game cover. One side will be the full colour version, but there will also be another which comes in the nostalgic gold colouring.  It’s not much, but it’s another cute feature that Nintendo are throwing at us.

Whether you’re a new to the series or a veteran, A Link Between Worlds promises to be a great release for all ages. Nintendo are definitely targeting the freebies and exclusive editions at folk familiar with the previous games and I think it’s a fabulous little bonus. Whatever your experience with The Legend of Zelda series, I highly recommend sticking A Link Between Worlds on your Christmas list! Hopefully Santa brings mine early… 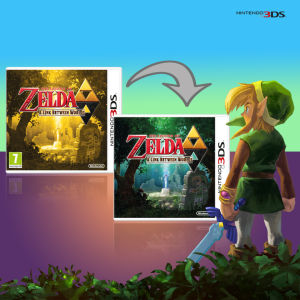 I'm an aspiring film journalist living in Chester. Into all kinds of geekery from N64 to Xbox, graphic novels, cosplay anime and more. I have an unhealthy obsession with Pokémon and the Legend of Zelda series. So much so that I have two Zelda tattoos and various Pokémon lurking all over my house. In my spare time when I'm not busy being a real person and working, I'm writing or making retro games jewellery. I'm also obsessed with pandas. They're fabulous.
You might also like
3DSbreakinggame