SHOCK! AWE! WONDERMENT! A SLIGHT RISING OF THE EYEBROWS!

All right I admit it, these are some of the feelings I did not go through when none other than Nvidia announced they were taking on the handheld market with their new console on Sunday; dubbed Project Shield. Well, maybe the last one. Because let’s face it, it’s pretty interesting news, even if the internet is already abuzz with discussions on how it ‘looks like a tablet welded to an Xbox controller’ and how it’s generally doomed to failure. Because despite my reservations…I actually think it’s a good idea.

Firstly; the specs. It’s no surprise that, seeing as Nvidia announced it the day before, the console will house the graphics giant’s brand new Tigra 4 chipset. Interestingly, it will also run Android’s Jelly Bean operating system, all with a pretty 5 inch 1280×620 HD multitouch retinal display. 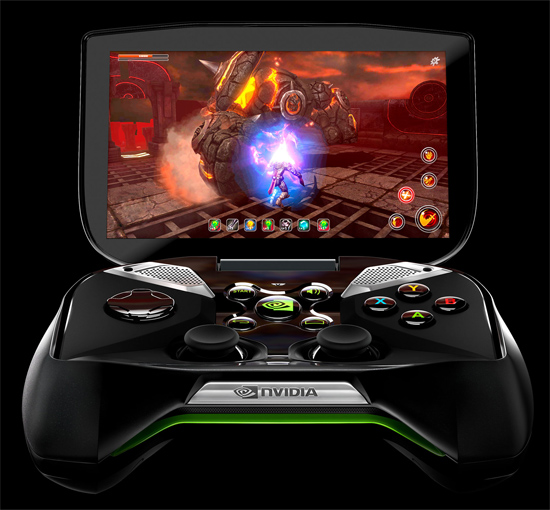 The big claim from Nvidia is that thanks to its Tigra 4 chipset and WiFi, Project Shield will be able to stream games from any PC equipped with Nvidia’s GeForce GTX 650 series graphics processors, including those from the steam store. This means it will be able to play games on any TV in the house, or simply on the couch. Thanks to its Android OS, project Shield will also be able to independently play Android games, which can be downloaded from Google Play and Nvidia’s TigraZone.

The prototype images show a full sized console controller attached to a flip-up screen, as opposed to the current norm of building the controls around the screen itself. If I’m being honest, it doesn’t look great. If I’m being brutally honest; it really does look like an Xbox controller welded to a tablet. But even so, the lack of gimmicks and independent gamepad shows that Nvidia are serious about their device being a gamer’s console foremost.

Honestly, on paper this looks to be pretty exciting technology. Early previews do seem to be saying that the console performs well when streaming from a PC, with no noticeable lag or dip in graphics quality, and with the draw of android for the more casual market, this has something for everyone. However, streaming can only occur on the same WiFi network as project Shield; so unfortunately that means no assassinating the British in Starbuck’s, or pimping your Vauxhall Corsa on the bus. 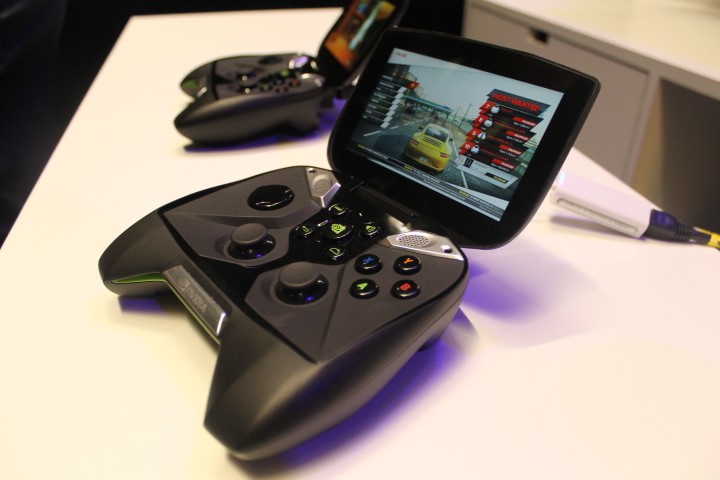 Even still, this is a good thing. Steam’s recently released Big Picture Mode which allows PC games to be played on home TVs is performing well, and it seems the quest to take PC gaming to the couch is only going to become more pervasive with project Shield. The only other downfall to this is the need for the home PC to have a specific Nvidia graphics card. Not every PC will have one; I certainly don’t, and I wonder how many people will want to pay for a new GPU, as well as pay for the new console as well?

Either way, Nvidia are clearly going for the ‘hardcore handheld’ market. A bold move considering that particular niche’s has a track record about as good as Eddie the Eagle, but they are definitely going the right way about it. The PS Vita and PSP were supposed to be handheld consoles for more hardcore gamers but although they both struggled financially, it was mainly due to lack of quality titles and third party support. With project Shield acting as more of a device that enables you to play existing PC games rather than a completely new platform; Nvidia won’t have the problem of trying to entice developers to develop for it.

If anything; this release shows that Nvidia think they’ve found a market worth exploiting, and they are obviously taking it seriously. But with the likes of Steam’s own Ouya console coming in at the extremely competitive $99 mark, and still no price tag for Project Shield, time will tell whether this announcement will herald the true arrival of on-the-couch PC gaming, or if it will be little more than an expensive gimmick.

Matt, 24 last time he checked, was born and raised in Manchester. A self-styled geek; when he isn't annoying his other half by fitting in as much gaming time as he possibly can, he can be found getting his fix of Fantasy and Sci-Fi elsewhere by reading, writing, or watching TV Series and Films. He is also a Michelin 3-Starred Chef in his spare time, and can be found experimenting in the kitchen, and generally poisoning his friends with obscure and mysterious dishes.
You might also like
androidbreakingconsole