A rules light and moody heavy roleplaying game, where players have to rely on their wits rather than weapons to overcome obstacles.

Tales from the Loop has a very specific mood, that some inexperienced GMs may struggle to properly capture, although this can be mitigated by immersing oneself in the genre.

An excellent game for running fantastical stories in a modern setting, which manages to convey the wonders of new technology with the mundanity of daily life.

Based upon Simon Stålenhag’s iconic artbook of a Swedish retro futuristic suburbia, the tabletop roleplaying game Tales from the Loop recreates an eighties that never was.

In many ways, Tales from the Loop feels a lot like a cross between ET: the Extra-terrestrial and Stand By Me.  Other, and more recent, comparisons would be Stranger Things or the forthcoming Ghostbusters: Afterlife.

In Tales from the Flood, every player character is a child.  The ‘kids’, as the player characters are known in the game, live near the Loop, an advanced research institute.  It is a setting where wonderous technologies have become ubiquitous and familiar.

Its unique blend of themes allows players to explore the intersection between childhood, technology and modern life.  As such, it has a very specific narrative tone that is unlike any other.

Tales from the Loop has a heavy emphasis on narrative.  This is exemplified by the combat system, which is distinctly fluid and less structured than most other roleplaying games.  Unlike the typical combat system, where everyone takes it in turn, here it is up to the players to determine what happens next and who goes first.

Likewise, the game makes a point of saying that none of the kids should ever die in combat.  They can become frightened, panicked, injured or scared (all of which have negative connotations) and can lead to the kid leaving the game, but they will never die.  Likewise, the game actively encourages games masters (GMs) to avoid giving the enemies any guns.  Their argument is that players will naturally want to even the metaphorical playing field by giving characters their own guns, and kids with guns is not what this game advocates.

What Tales from the Flood does encourage is collaborative problem solving.  Rather than a typical “adventure”, the ‘kids’ solve what the game calls ‘mysteries’ and presents two different approaches of game styles.  The first, more traditional, style of game is the plot-led sessions, where the characters have a specific mystery to solve.  The alternative is the setting-led style, where there are multiple mysteries for the player characters to discover and explore.  Naturally, the latter style requires more preparation on the behalf of the GM, but can be more rewarding to play.

Tales from the Flood has already performed some of the preparatory work for a setting-led game, as the rulebook includes background on the Loop and has two detailed settings.  There are the Swedish Mälaren Islands, with the Loop buried underneath them, or Boulder City near America’s own version of the Loop.  Whist they shared many thematic similarities, they are vastly different, especially in terms of their seasons and the impact it has upon the inhabitants.

It could be argued that the American setting feels almost redundant, in that both settings are the stereotypical county towns.  Boulder City is just like the Mälaren Islands but warmer.  However, for those who live in colder climates – like Sweden – playing in somewhere like Boulder City might be different and therefore appealing.

As can be expected from such a storytelling-style game, the rules system has a similarly narrative-led approach.  Using Free League Publishing’s core D6 system, skill checks are resolved by rolling a series of six-sided dice equal to a character’s skill and attribute, with every six indicating a success.  The number of dice can be increased – or decreased – subject to the environmental and situational factors.

Character creation is equally streamlined and narrative-led, centred around the different stereotypical children that are seen in fiction.  These can range from the bookworm to the troublemaker, and each comes with a set of skills to match.  Most importantly, each player can also choose a unique item for their character, such as an older brother’s hat.  Not only can this offer situational benefits, but it can make them feel unique and add further depth to the character.  This rules-light approach for character creation means it is also relatively simple for players to create new archetypes to play.

Tales from the Flood also comes with a campaign of four interlinked mysteries.  Not only are these fun to play, but they demonstrate the style of games that the designers had in mind when they were creating Tales from the Flood.  These mysteries are not dependent upon a specific setting and come with reference points for both the Mälaren Islands and Boulder City. 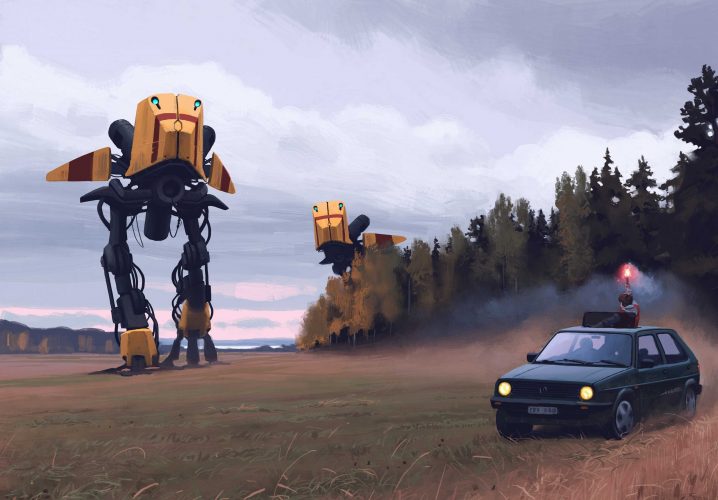 Science Fiction: the final frontier. These are the articles of the freelance journalist Peter Ray Allison. His continuing mission: to explore strange new realms of fiction, to seek out new genres and new visions of the future, to boldly geek where no one has geeked before.
More Goodness
eightiesFree League PublishingGaming