Fury Road has been out less than a week and already people are masturbatorily penning origin stories of a random dude with a guitar in it that gets all of about 2 minutes screen time. This is a fairly good indication of how much of an incredible film Mad Max: Fury Road is. It is a furiously (pun intended) and unabashedly actiony slice of sex wee that dosen’t relent from start to finish. It’s literally a car chase- that’s plot. There are kasplosions aplenty, epic vehicular gymnastics, and a dude that plays guitar that’s SO DAMN MYSTERIOUS WE MUST KNOW MORE. 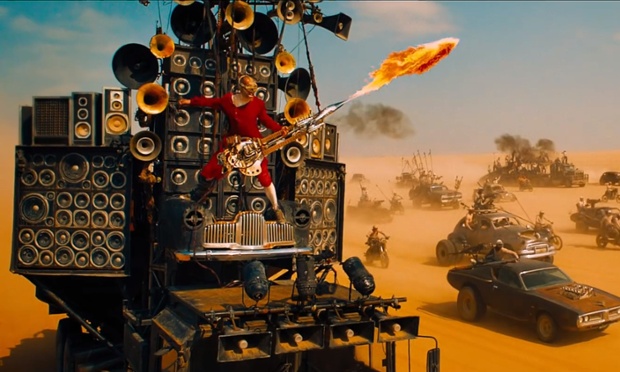 Hardy’s performance is an exact continuation from what we’d expect from Max’s character, he doesn’t say much, he’s haunted by his fringe insanity, and he does lots of manly jumping things. At the end SPOILERS THAT SMELL LIKE BURNT HAIR AND SPIDER FAECES Max just moves on to the next adventure, proving that he is indeed still mad.Also, he only does the Bane voice like once, so that’s good.The supporting cast are equally as bonkers and our arguably dual-lead in Ms Theron’s Furiosa is the very definition of a bad ass.

If you haven’t realised by now, Fury Road is a film I, quite frankly, fucking loved. It was the perfect sequel and part of a Hollywood trend I am ecstatic about- throwing $250m at my favourite B-Movie franchises. It started (arguably) with Predators and continued with the awesome that was Godzilla (fuck you, it was brilliant) . It has eschewed the Gritty Remake Epidemic of the late 90’s/00’s (why film is 10 years behind comics I don’t know) and has given creedence to the OTT, single-plotted ‘roid fest joyrides while maintaining a modern cinematic edge. Honestly, if you don’t like these films you didn’t like the originals, or you don’t understand them.

There’s seemingly only one group of people that appear to not like Fury Road- a laughable group of “men” (read “fedora wearing simpering neckbeards”) that have somehow concocted the implication that the film is a vehicle (again, pun intended) for a feminist, no, a mysandrist agenda and should be avoided at all costs because Charlize Theron is the vanguard of the apocalypse and clearly our dicks will all fall off if we but set eyes upon her works.

I mean, for fuck sake lads. The point of the film is that A) Max is Mad, and B) There are cars and explosions of said cars. We are seeing a freak occurrence that is a microcosm of the world that was created originally in 1980 that continued to build into the intricate monstrosity that we are privileged to be a part of, 35 years later. There have been several “arguments” made to this cause, and I think it would be remiss of me not to quash these with an iron fist. 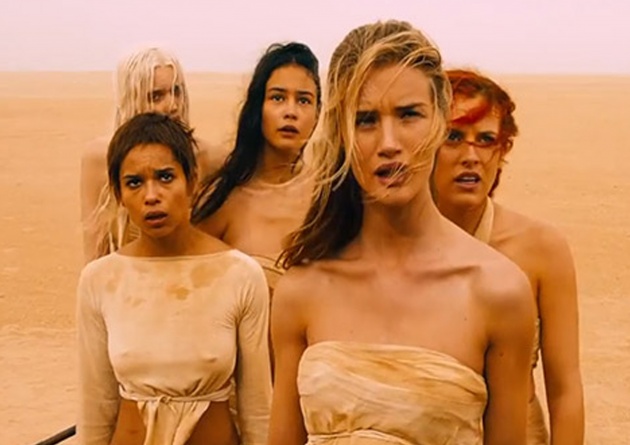 “You don’t have to do what he tells you”

This line is uttered from one concubine to another, when Max points a gun at them and attempts to take over the War Rig. Neckbeards are claiming this is a perfect example of the “anti-men” agenda. But when you consider the goddamn context it becomes pretty crystal that a woman who’s only interaction with men has been one of sexual abuse and violence is going to be a negatively charged one. When apply the context, it’s obvious that a scared woman told another equally scared woman not to follow the actions of a gun-toting stranger. Yes, this breaks the convention a little (but not really because they totally do as he says a minute later) but our protagonist is not a traditional leading man, is he?

Later, Max is facing down the impending horde of vehicular carnage with a few well placed sniper shots. He tries his darndest to hit his target,but alas, he misses. In walks Furiosa, who takes the rifle from him and cracks off the perfect shot into the enemy ranks. Surely this portrays our male character as weak, he’s had to pass the weapon off to a female, with one arm no less! Well, yeah, he has.The question you all seem to be missing however, is “where did he get the rifle from?”

The War Rig, idiot. Max had no guns of his own. He had recently just survived a series of car crashes, had been half- drained of blood, and had several hits to the face. This, unsuprisingly, compromised his sniping ability. And the rifle he was using belonged to Furiosa: It was in her vehicle. It belonged to her. Why the hell is it suprising that she shoots HER rifle better than a half-dead, insane stranger? A guy who, to our knowledge across 4 movies, doesn’t know how to snipe.

The men are all ugly, the women are Godesses

Let’s face it- the apocalypse hasn’t been kind to our menfolk.If they’re not pasty and full of tumours, then they’re gloriously overweight or just plain uggos. Aside from our lovable protagonist, it’s a fug-fest from start to finish. On the flip side, the females are portrayed as callipygous sirens, swaddled in nought but white robes. But what seems to be the completely missed point, is that they are supposed to look like that-they are concubines. The female contingent is either octogenarian or a nubile sex-slave. What should be celebrated here is that both parties break the tropes of their archetype. They represent the change that is necessary for thriving in a world completely fucked by earth-shattering events. They are the new status quo and this is echoed in the films end. Where this “women are the only leaders” bullshit falls apart almost instantly is when we look at any tribe of people that isn’t the one the movie has as a main focus. All of these are lead by patriarchal figures. In the films end, Max isn’t “leaving it to the women folk” to run the Citadel, he’s just getting the fuck out of Dodge, just like he was at the start of the movie. Nothing has changed for him. Max is the Agent of Change throughout the franchise, who ironically cannot escape the constant threat of his own madness. That’s the point of every movie post the original.

So please, please go and see this movie. This is THE summer movie. A good friend of mine said that to teenagers Fury Road is going to be their Predator, and he’s cotton pickin’ right. It’s irreverant, brilliant, and awesome. And if this article hasn’t convinced of the lack of misandry within then I urge you, from the bottom of my beardy heart, to fuck off back to tumblr and fucking stay there until you asphixy-wank yourself into a coma with your own sense of righteousness. It’s you , along with everyone else that’s too easily offended, that is ruining the film industry. Pack it in before you suck the fun out of everything.

It’s been a lovely day.

Hailing from Kent, England, Mike is a writer, editor and podcaster who has just finished his degree at CCCU. He also is a drummer of 11+years, plays in several bands, and is available for session work. His other interests are Batman, music which doesn't suck and pizza. Follow Mike @The_Dark_Mike
You might also like
breakingCharlize TheronGeek Pride