> So, so, so unforgiving
> Odd control system
> Some graphical pop-up

An immersive and rewarding experience, with an extraordinary amount to do and a massive world to explore. The game is marred slightly by an odd control system, and a difficulty level that doesn't resemble a curve, more a 20ft wall.

“This is me at my most… masochistic.” The late great David Carradine‘s line from Kill Bill has never been more relevant to me than while I’ve been playing From Software‘s Dark Souls II. The game could’ve easily gone under the guise “Death Wish”, or “1000 Ways To Die, Medieval Edition”… but I’ll get to that in a minute.

Have you ever played a game that was so frustrating, that it brought out the stubborn side of you and effectively forced you to continue playing? If you have, then you might have a similar feeling when you play Dark Souls II. This game is most definitely the most punishing title I’ve ever played… and although I’d describe myself as a fairly casual gamer, I’ve had my time playing a plethora of MMOs like World of Warcraft, RF Online, Guild Wars and the like. I’ve played the in-depth titles looking at what gear to wear, what instances to run, how to tackle a particular boss and so on. But none of this even remotely prepared me for playing this game.

As a bit of background, I didn’t play Demon Souls or Dark Souls (the 2011 game was heralded as one of the hardest games of recent years). Because of this I’ve come into it’s successor completely green, and not knowing what the hell I’m doing. This initially really didn’t work in my favour. I ended up actually hating the game, almost not wanting to continue… but I slogged on, and took one for  the team. Thankfully I did, as when you find your feet, it becomes a really rewarding game.

If. like me, you didn’t play Dark Souls… fear not. Although Dark Souls II takes place in the same universe, there’s no directly-continuing plot points. Your character is a cursed undead, roaming the world of Drangelic in the hopes of finding a cure for your affliction. I won’t divulge any further details than that… I’m not about spoilers, so feel free to read on without having anything ruined for you. 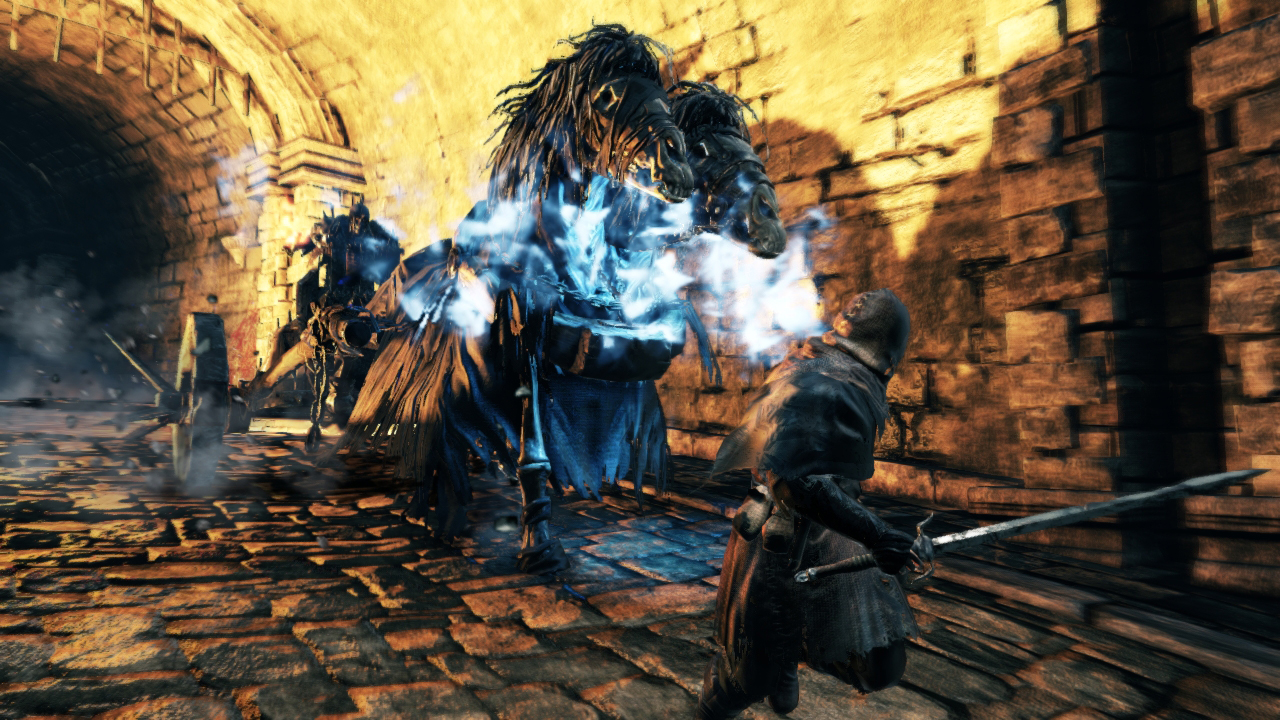 The lighting with a torch looks great, plus some enemies cower from the light

Graphically, Dark Souls II isn’t as impressive as I was initially expecting – don’t expect it to stand up against titles like Assassin’s Creed: Black Flag… but when you take into account the size of the world, along with the excellent dynamic lighting effects it’s something you can overlook. After all, DS2 lasts a hell of a lot longer than Black Flag does (60+ hours, depending on how much you want to explore). There has been a dip in graphical detail since the early build screenshots, however the trade-off comes with the smooth as silk 30fps with no stuttering or juddering.

Some of the expansive vistas you get to see are quite beautiful, and it’s good to stop and take these in from time-to-time. Drangelic is a massive place with a seemingly endless area to explore. There’s a wide variety of area types, from misty marshes, to crumbling ruins, tombs, dungeons and so much more. However if I’m going to nitpick, the opening tutorial area is a little dark and bland, with some uninteresting ground and wall textures used. Plus there’s a little bit of popup here and there, but this doesn’t happen often enough to actually annoy me.

The sound and music in the game is excellent – voice acting is all pretty well done, and none of it seemed particularly cheesy or out of place. The music is quite rousing, and helps to inspire suspense and tension well. It also helps to make the more awe-inspiring scenes that much more engaging.

One thing I didn’t get on with much was the control system… it takes it’s queues from Dark Souls, but as I didn’t play it, some aspects I really didn’t get along with. For instance – if you want to run, you hold B, and if you want to jump, you click the left stick. This makes jumping gaps (among other things) particularly annoying. 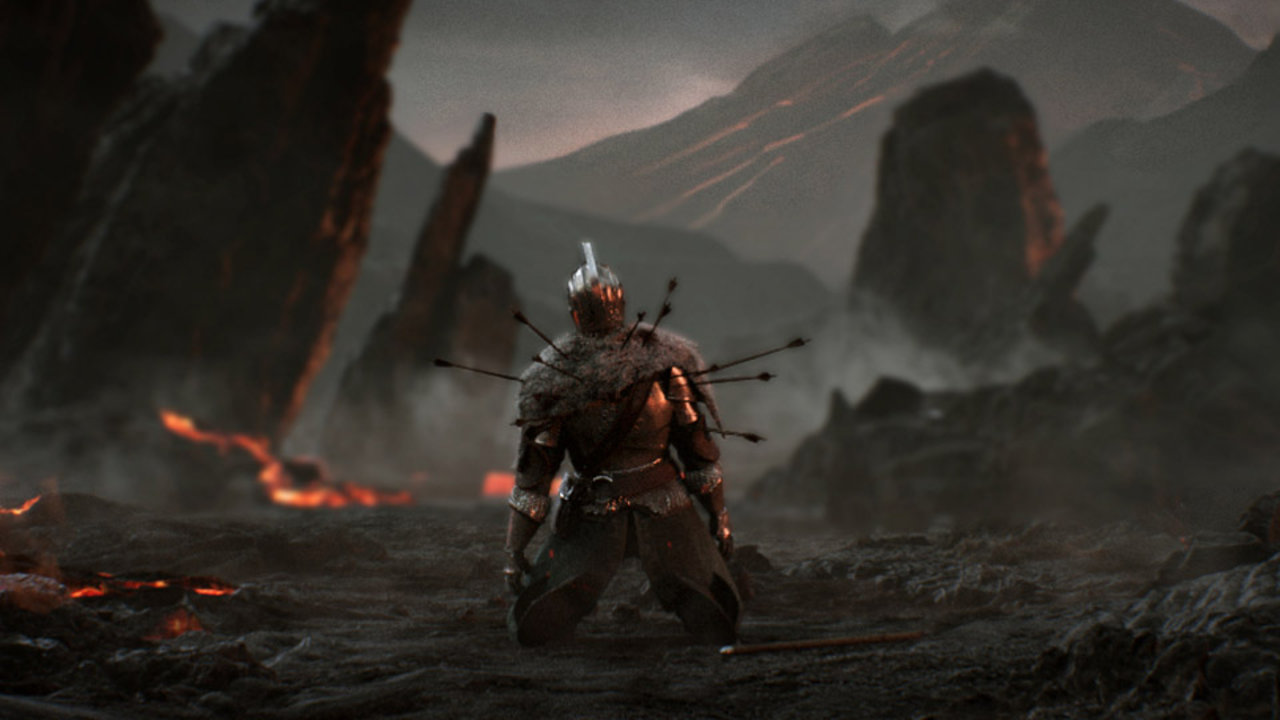 You will die. A LOT.

The gameplay is outstanding, and series purists will be happy to know (as I’ve already mentioned) that Dark Souls II has kept the difficulty level as high as ever. In fact, From Software have ramped it up a notch or two by making death that much more excruciating. What am I talking about? Well… when you die, your max HP takes a hit too – this is something that can only be remedied by using a Human Effigy, and these aren’t exactly lying about the place in droves. Some think this is probably a step too far (me being one of them), but this only helps to add to the challenge of the game… which is half the point.

Combat builds on the experience in Dark Souls, with the emphasis placed on tactics and timing. Just standing there trying to batter the shit out of your enemy won’t serve you well (even less so if there’s more than one), but learning the way an enemy attacks, when to dodge and finding it’s weak spots are paramount. This is particularly important with boss battles, as often making one wrong move means restarting, and this will happen again… and again… and again.

When it comes to missions/quests, you’re not given any direction. It’s like you’re completely left to your own devices, allowed to roam where you want and interact with as much (or as little) as you like – much like when you build your character. When you’re trying to traverse a particular problem, a boss that you can’t take on blocking your route for example, you will have several other options that will lead you to the same goal. It’s facets like this that I love about the game, and reminds me of titles like Deus Ex with it’s multiple methods of dealing with a problem. 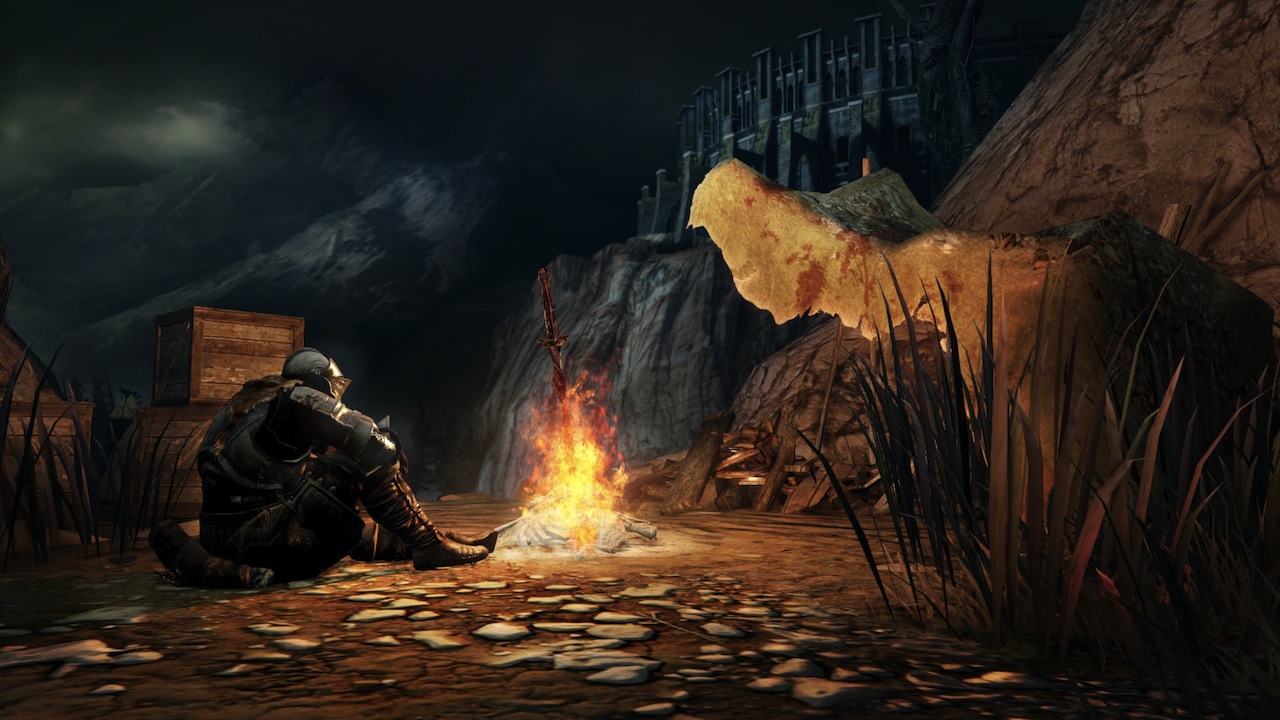 Bonfires will be your best friend. Recoup health, fast travel, upgrades are all accessed from them.

There is a fast travel system incorporated too, centering around bonfires. This allows you to transport yourself anywhere you’ve previously been within the world, as long as you’ve lit a bonfire there. This is incredibly convenient, save for if you need to teleport out to the hub area to do stat upgrades where it just becomes arduous and time consuming.

The lack of direction is also prevalent during the character customisation too, which I’m told by a Dark Souls-obsessed buddy of mine is something that was present in the previous game. When you get to name yourself, you’re also asked to choose an archetype. These range from the bog-standard warrior, to an axe-wielding mercenary, and twin-bladed swordsman, a magic-using mage and more. You can also choose a blank slate should you wish, much like Dark Souls. The amount of options when you’re choosing your character’s traits almost gets close to some MMORPGs, with a load of visual options to change the way he/she looks.

Because everything is left to the gamer, it makes your decisions that much more significant. It also means that one gamer’s experience is potentially completely different to another’s… which falls in line with titles like Skyrim too. This is definitely not a bad thing. I’m not sure this adds to the game’s replay value, what with it being a gargantuan 60+ hours of gameplay anyway, but it could keep the hardcore sado-masochists coming back for more I imagine. 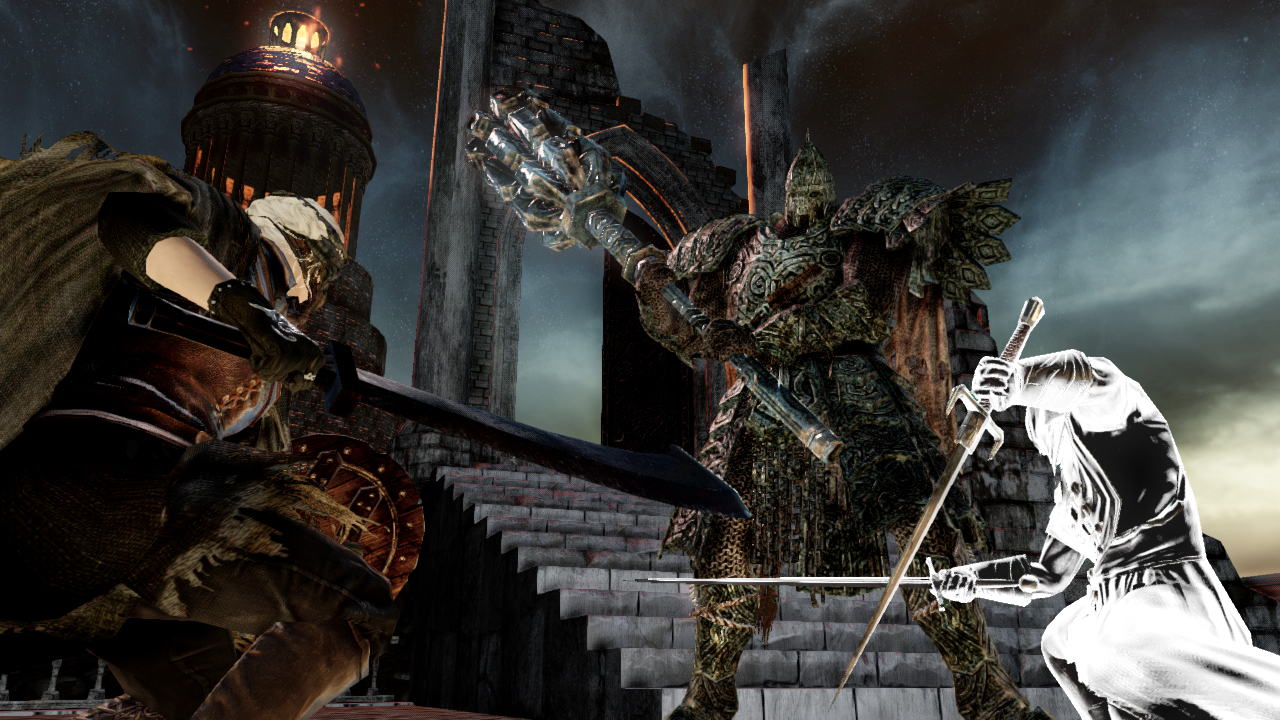 Stuck on a boss? See if you can rope in a friend to help

In terms of multiplayer gameplay, the game continues in the same vein as it’s predecessor – you can choose to be a nice guy and help other players, or you can be a bit of a dick and grief them instead. Covenants help to expand the multiplayer aspect of the game, with membership to different Covenants offering different perks and choices – these range from laying traps to placing enemies to help combat intruders. Though if I’m completely honest, I didn’t tinker with this side of the game very much.

All-in-all I’ve been impressed with From Software’s efforts in Dark Souls II. They’ve built a robust, deep and extremely challenging game that will keep you coming back for more. The difficulty is often bordering on the ridiculous, but when you overcome those problematic parts, it’s incredibly rewarding. My other gripe about the control system is a moot point if you’re a prior player of the franchise, and I could find little to complain about in general. If you’re looking for value for money, and an epic sense of accomplishment (or alternatively if you’re feeling like you need to be punished), then Dark Souls II is well worth investing in.