Straight to the Point; The Far Cry series has always made great things with the premise of one man alone in the wilderness, and Far Cry 3 keeps this up with stunning visuals and excellent gameplay.

As Far Cry 3’s deranged antagonist Vaas says often; “Did I ever tell you what the definition of insanity is? Insanity is doing the exact… same fucking thing… over and over again expecting… shit to change… That. Is. Crazy.”.

Ironically, although Ubisoft has followed a similar formula for the past 3 Far Cry games now, this latest title surpasses the others in almost every way, to the point where Far Cry 3 has become the game the past two always should have been.

Far Cry 3 follows one man in a deadly, foreign wilderness, fighting and using the environment against a big bad guy we hardly ever see. Clearly business as usual for Ubisoft, then. The difference is, there’s actually a deep, emotionally driven story here. The one man in question is Jason Brody; youngest of three siblings backpacking round the world with associated friends and partners. In the opening sequence we see shenanigans aplenty with the stereotypical American bunch causing fights in bars, getting drunk on the beach, and finally taking a skydive. However they’re quickly brought down to earth (no pun intended) when they get captured by a group of sadistic pirates led by the psychopath, Vaas.

The opening section involves your ex-marine brother breaking you out, and in a very well disguised tutorial, teaching young Jason the art of stealth. Of course, the chances of you both making it out alive are about as likely as Uwe Boll being chosen to direct the next Star Wars movies and sure enough, Vaas executes your elder brother in front of your eyes, beginning this tale of madness and conflicting loyalties. 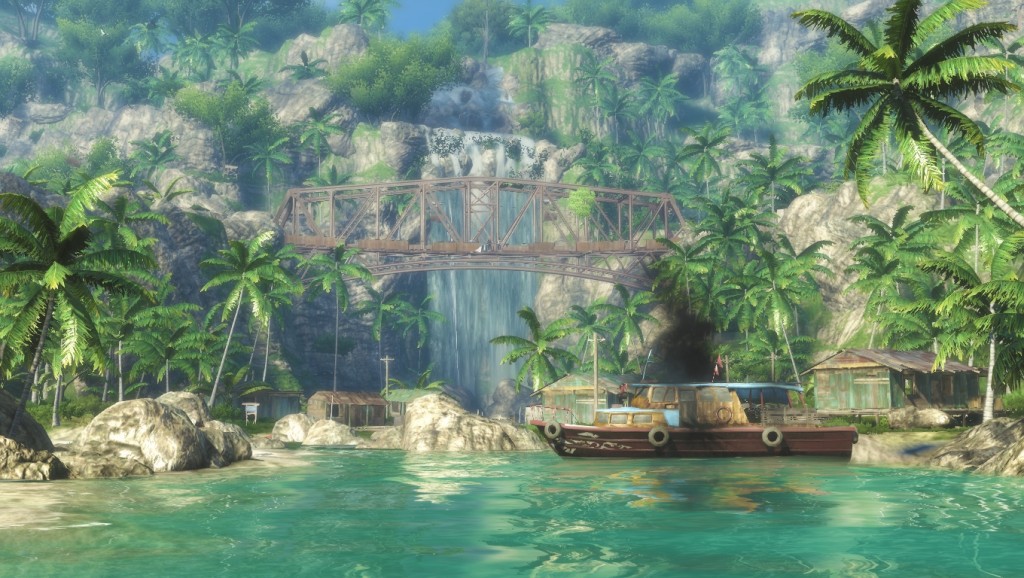 Now, what makes this opening brilliant is that although Far Cry 3 is in the first person, rather than having a silent protagonist and expecting the player to project their emotions onto the blank slate, the character is already fully formed. Jason constantly speaks to himself, and subtle clues in his breathing give you a unique insight into your character’s mindset that other FPS games might struggle to do. Even cutscenes are in the first person. You never see Jason as a player character; you are Jason.

This is most prevalent when Jason is being chased through the forest after escaping his captors. He’s running for his life, and rather than just “generic first person panting noises” we actually hear the panic in his ragged breathing, can tell the emotion in his anguished cry when his brother is shot in front of his eyes, and can sense the shock the first time he kills a man, as he stares at his trembling hands, weeping to himself and muttering quietly.

Jason later wakes up having been rescued by a local tribesman, who takes no hesitation informing Jason that because he managed to escape and accidentally kill a man, he is clearly a great warrior and their saviour. Now, this is where the problems arise. Within a matter of minutes we’re suddenly taken from anguish and confusion at being forced to take a life, to being trained in “the ways of the warrior”, and sauntering off to slaughter a camp full of pirates without so much as an elevated heartbeat. Ubisoft obviously wanted to tell the story of an average American forced to survive and rescue his friends no matter what the cost, but a lot of potential was wasted in the game’s eagerness to allow us to shoot and stab and explode things.

When Jason complains how disgusting it is to skin a bear, and next moment hops into a car and pulls bullets out of his arm with his teeth, it really conflicts with the main missions, which do a great job of presenting the emotional aspect of the narrative. You do see the effect your decisions have on the people around you, becoming further detached from civilisation, but the disbelief is still there. It’s reminiscent of clichés like Nathan Drake making quips as he happily kills hundreds of people, only this time the developers have chosen to address this cliché rather than leave it as the mass-murdering elephant in the room, so it’s very noticeable when it’s not done well. 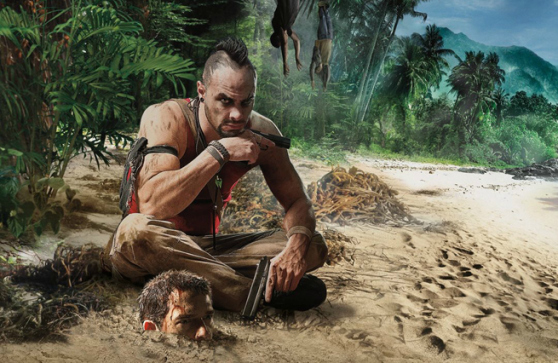 Despite this it has to be said; killing people is fun. The developers have really gone out of the way to forge a beautiful, lush landscape with the Rook Islands. While it isn’t exactly varied in its appearance; long grass, hills trees and cliffs being prevalent, this is by no means a bad thing. It’s still fun to explore, and aside from the generic copy-and-paste buildings of the pirate camps not once did I get bored of looking at the huge waterfalls and flowing rivers, the mountains, forests, beaches, World War 2 bunkers, secret caves and more. All of it looks stunning, and the attention to detail, from the refuse in the shanty towns to the quaint fairy lights strung up in village squares, gives everything a sense of atmosphere.

But if Ubisoft have tried hard to create a beautiful landscape, they’ve tried even harder to turn it into a playground Everything you see is tailored to make things more enjoyable; from cars in the middle of nowhere to hang gliders helpfully placed at the top of hills. Even enemy camps are ideally located next to overlooks, or contain numerous hiding spots and tall grass for sneaking. And yes, even exploding barrels make an appearance, along with cages where animals can be released to cause havoc. It makes the game flow better, and as a result more enjoyable, without the hassles of being spotted from half a mile away, enemy camps respawning over and over, or pointless malaria attacks like the last games. 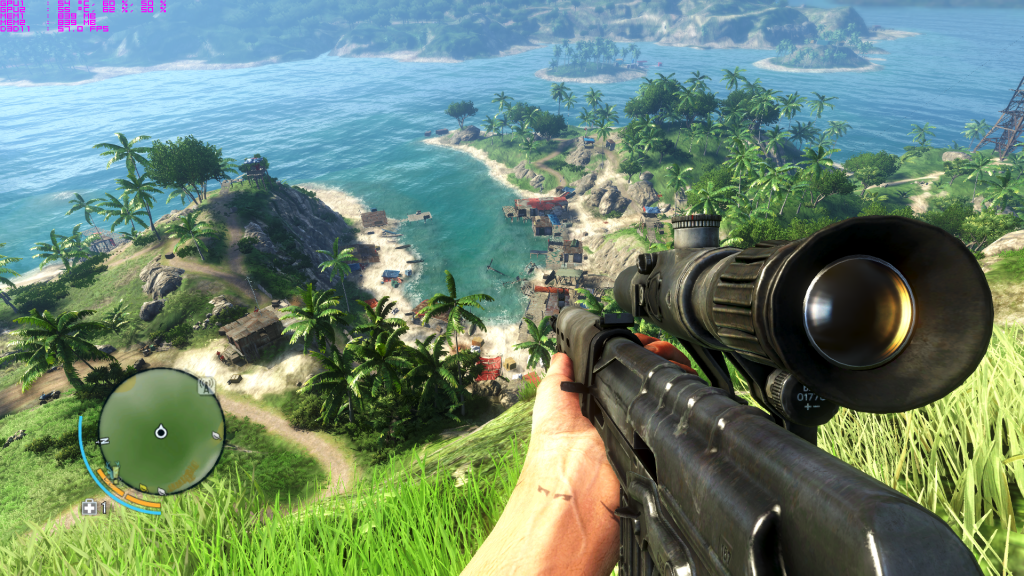 This was hammered home when I was liberating an outpost. Unlike previous editions, outposts can be permanently conquered, removing the pirate’s presence from the surrounding area and opening up side quests. For this particular liberation I’d hiked up a mountain nearby before tagging all the enemies in the compound (a new addition which allows you to use scopes to highlight, identify and track hostiles, even when they are in cover). I then sniped the two lookouts and shot a tiger cage, releasing it. Using the commotion I shut off the alarms before finishing off the last of the guards without attracting attention. I could just have easily sneaked in and used the tall grass to perform takedowns one by one, a-la predator mode in Arkham City, or simply waded in and set fire to everything. The freedom is there.

Aside from single-handedly liberating an entire island, there’s a lot more that needs to be done. Radio towers can be scaled Assasin’s Creed style to free up new areas of the map, there’s hunting to be done, a talent system, assassination missions, races, crafting, exploration and collecting galore, unlocking new weapons and even just admiring the landscape. That’s not even mentioning the co-op multiplayer mode. 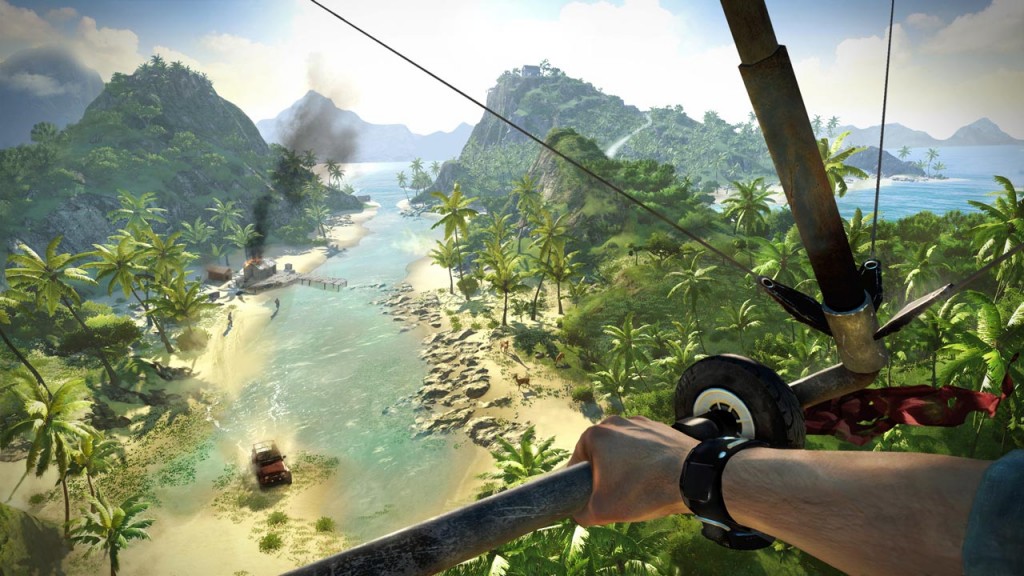 However, there are some areas that lack polish. The driving mechanic fares atrociously, for a start. The slightest turn is guaranteed to send you skidding out of control, and it’s incredibly frustrating to career off a hill or bridge for the tenth time in a row just trying to correct your unintentional power slide. It’d be understandable if it actually reflected driving on dirt roads, but it’s as if everywhere you go you’re driving on ice.

Jason’s health levels are another problem. You start with a couple of health bars which should be enough to carry you through the initial portions of the game, but the way Jason goes from peak health to death’s door every time he takes a stumble you’d think he suffered from brittle bones. Despite Jason being an experienced thrill seeker there’s practically no ledge small enough to jump off without taking some damage, and getting caught in an open fire fight is suicide. It’s incredibly frustrating, and in a supposed sandbox game, it’s very restricting if you can’t climb and fall quasi-safely, or wade into fire fights and tackle people head on.

Although parts of Far Cry 3 can become repetitive; there’s enough diversity to keep things fresh. And with multiplayer co-op included as well, there’s a lot to keep you busy. And with the only thing holding it back from perfection being some annoying gameplay issues and a confused moral compass, Far Cry 3 is nonetheless a fantastic game that will give you plenty of entertainment for hours to come.