Games You Should Play: Ōkami HD

If there’s one mode of storytelling I love more than any other, it’s myth & legend. It’s why I enjoy movies like Clash of the Titans and Percy Jackson, and why I gravitate towards games like the God of War series. However when it comes to Japanese mythology, I know literally nothing… and this is part of why I find Capcom‘s Ōkami HD so captivating.

I’ve always been generally fascinated with Japanese language and culture (to the point where I’m learning to speak Japanese… very slowly. Sumimasen!), but as the mythology of Asian culture often involve mystic animals like dragons and the like, it’s hard not to take notice. Combine that with some of the beautiful sumi-e artwork from the region, and great gameplay and you have an amazing experience.

Capcom originally released Ōkami on the Playstation 2 in 2006, and for the Nintendo Wii in 2008 – and it was met with raucous applause from the gaming community. The action adventure gameplay married exceedingly well with beautiful visuals and a stirring soundtrack, with a story borrowing from Japanese myth, legend and folklore to make a truly engaging title.

The HD port was released in October 2012, and last month was available on Playstation Plus for free… so I couldn’t resist in snapping it up, as I’d missed the opportunity to play it the first time around. 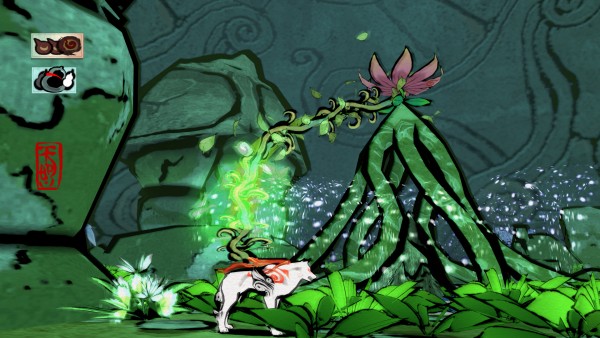 The story revolves around a malignant spirit called Orochi who has cursed the land and sapped the lifeforce from every living being as an act of vengeance for 100 years of imprisonment. Orochi was previously subdued by a warrior called Nagi, assisted by a pure white wolf named Shiranui. Orochi’s escape was facilitated by Susano, descendant of Nagi, in an attempt to prove the legend surrounding Nagi, Shiranui and Orochi to be a lie.

Now that the evil Orochi is free, wood sprite Sakuya calls forth the sun goddess Amaterasu, believed to be the descendant of Shiranui who takes the form of a white wolf. Accompanied by artist Issun, Amaterasu is tasked with ridding the world of Orochi’s curse, and restoring the land to it’s former glory.

From the off, I was impressed – the cel-shaded graphical style works really well with the overall aesthetic of the game, and even in a 3D environment it doesn’t look out of place. As you guide Amaterasu around the world, you leave a trail of leaves and flowers across the charred landscape which is a pleasure to watch, and the gloomy world prior to your intervention is suitably barren and devoid of colour which really helps to immerse you into the story.

I’m not sure if it’s just because it’s an HD remake, but the fluidity of the animation is a joy, and there’s next to no stuttering or redraw at any point in the game. Some HD remakes like Ico (although an amazing game) don’t look like they’ve had the necessary time taken to get the port as high a quality as possible, but Capcom have managed it with Ōkami, with full 1080p HD graphics, and widescreen 16:9 support.

The gameplay involved in the game at first appears pretty standard fare, with the joysticks controlling movement and camera use, with the X, O, triangle and square buttons taking care of attacks and jumping. If you use the move controller, it’s not a direct port of the Wii version (which originally had you attack by shaking the controller), with the attacks still being mapped to the controller buttons.

Early on you unlock the ability to paint (with the use of Issun), to create bridges, break rocks, cut down barriers and defeat enemies using a celestial paint brush – primarily using the right analogue stick. This is a great game mechanic, though initially a little tricky to master. Over the course of the game, Amaterasu learns 13 core brush strokes, each with their own attribute – one for making old machinery work, one to make dead trees bloom and so on. The celestial brush works so well it’s hard to see the game being as involving without it.

When using the brush in combat it works surprisingly well too, with the enemies slowing into a bullet-time-esque state to allow you to paint your chosen technique, then time speeding back up again to see the effects of your artistry. 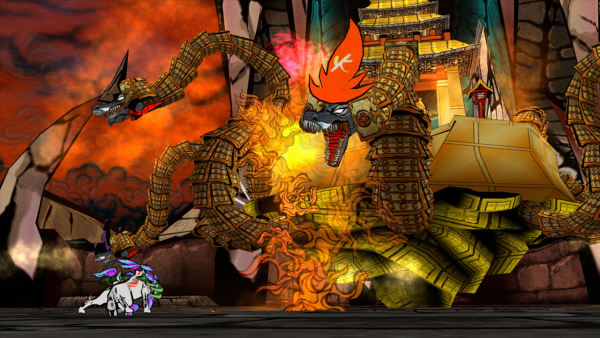 The bosses are suitably epic

There’s very little about the game I don’t enjoy, aside from Issun perhaps, who’s an annoying little pervert, but this is wholly intentional, and harkens back to the Kabuki plays of old which also often incorporated such comedic relief. And it’s not just Issun that adds to this humour that is interwoven throughout the story – you’ll bump into a plethora of characters, often being introduced in slapstick ways (some of the brush technique masters in particular), or they’ll have Issun making inappropriate boob-orientated comments and jokes.

One thing that may irritate the more impatient of players is that there is a lot of story to get through, delivered via unskippable cut-scenes. The story is great though so it’s most definitely worth the wait. My only other main gripe was the camera, as it sometimes ended up being problematic during combat… however this didn’t happen nearly enough to frustrate me like other titles. (Devil May Cry anyone?)

This PS3 exclusive is an essential purchase for everyone in my opinion – it’s a game that needs to be played, and between it’s free availability on PS+, and it’s still relatively reasonable price of £15.99 now, there’s no reason for you to not own this title. Buy it, play it, thank me later.

Click here to view Ōkami HD on the PSN Store