previous
Stealth Inc. 2 is coming in late 2014 as a Wii U exclusive
random
next
Nintendo: No New Console at E3
Video Games & Tech
0 likes

Feels slightly small in scope compared to DayZ mod.
Nether teleportation patterns fairly predictable.
Perhaps too easy to be taken out by other players without ever knowing, even when travelling a fairly short distance from the safezones.

A strong game, providing definite competition to similar survival horror games. Not quite yet ready to go up against the DayZ mod in terms of diversity and scale of playability but it runs rings around the standalone and looks vastly better than the mod.

“Phosphor’s DayZ killer.” That’s what Rock, Paper, Shotgun called Nether. It’s a bold claim. Ever since the DayZ mod came swaggering onto the Internet, boldly seizing the survival horror crown, a whole host of competitors have sprung up, from the truly abominable WarZ (now hiding under the name of Infestation: Survivor Stories) to more developed titles like Rust. The mod even garnered enough attention to merit its own standalone game, reviewed here. So when a claim like “DayZ killer” gets put out there, it’s quite a challenge. Because while the standalone is currently underdeveloped and the mod does have a whole host of problems, that mod still represents a possible pinnacle of the genre which it seems to have brought to fruition. So, does Nether have the balls to commit matricide? Not quite but it gives its progenitor a damn good drubbing. 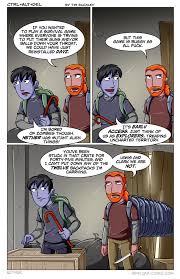 I got stuck between two tents for 20 minutes

You see, the problem with the DayZ mod is that rather than focus on fixing all the issues with the original mod to present a whole entity, the legions of modders decided it would be better to just keep making more and more mods, endlessly expanding an already, sometimes painfully, broken game. This means that when a title like Nether steps up to the bat, they do so with one big advantage and one big disadvantage. To their credit, they enter the arena with a proper, fully developed game created by and for a professional studio as opposed to a for fun modding collective. On the other hand, this collective approach has meant that the DayZ mod is massively expanded and can offer a large range of approaches to the game within a wide variety of situations and environs, a feat that’s hard to replicate within the confines of a studio effort.

And, perhaps predictably, it’s a feat that Nether doesn’t pull off. Now, it must of course be borne in mind that I have been playing an advance copy, beta version of the game but, as an indicator, I just don’t think it can pull it off. Though full studio development does have its advantages, it just can’t replicate the scale of a modding community’s frenzied efforts to pull things off that a studio would never consider for a whole host of reasons. So I respect and like Nether. For what it is, it’s made a considerably strong effort and, in fact it’s not even the game’s problem that it’s been described as such. Obviously it is inevitable, as I’ve proven, that such a game will draw comparisons to its strongest competitor but I don”t believe that this is what Phosphor was necessarily setting out to do. Particularly as, while Nether may indeed fall into the same broad genre of survival horror, it is in actual fact, a fairly different game from DayZ. I mean, if nothing else, let’s take a look at the game’s titular monsters. 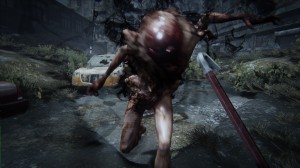 I immediately regret my decision to go outside.

Teleporting. Bile spewing. Musclebound. There are a couple of types of Nether. Did I mention the freaking teleporting? In fairness, the teleport patterns are fairly predictable and it’s not too hard to beat the more basic types. But when they start grouping up and spitting black goo in your eyes and there’s one of the freaking huge, tank like types on the horizon, you tend to start avoiding the creatures whenever possible.

The freaky bastards claw like a bitch when they hit you and, rather than just finding guns,there is more of an emphasis on crafting so it’s not uncommon to find yourself running around with whatever blade you’ve happened to come across or buy. The katana is pretty good. Even the basic butter knife you spawn with works in a tough spot. But I highly recommend getting a gun as soon as possible. Not because of the Nethers though. Because of quite possibly the single greatest threat in the game

Players.The game’s tagline is “Prey or Pray”. Clearly I didn’t pay enough attention in Sunday school because I was most definitely the other players’ bitch.

One player killed me after pursuing me for a weirdly long time given that all I had was the basic spawn gear. He must have felt truly triumphant as he swung his machete to cut down the dude with a butter knife. The other two player deaths I simply assume were player kills because I never saw  or heard a freaking thing. So either it was some kind of game glitch or I was headshotted by players I never saw. Either way, it was readily apparent that trying to peacefully go about my way scavenging for gear was not going to work out as well as I hoped. My first clue should probably have been the tribes. 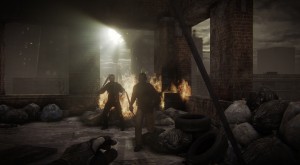 The immediate regret of wandering into this room

Nether employs a tribal system in which players can join tribes and then compete for control of buildings across the map. Dominance obviously provides perks as the greater control over the environment allows you to explore more safely, utilising team work for greater protection when scavenging, thus ever improving on your current gear. The important part is that competition bit though. While I haven’t yet managed to properly involve myself in tribal conflict, it is an interesting dynamic to throw in. The true enemy in any post-apocalyptic situation, more than somewhat tragically, is always your fellow survivors. You can learn to avoid monsters or predict their patterns. But you can never quite predict that bastard sniper in the towerblock. 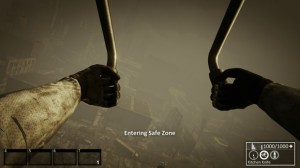 I’m King Of The World!

Though, speaking of towerblocks… See that image there? On the left? That’s a player hand-gliding. Because that’s a thing in Nether. This isn’t even an essential function or core item by any means, I just think it’s cool as balls that I can hurl myself off of skyscrapers and gracefully glide through the air, soaring like a majestic peacock. Like, the amount of in-game money that this thing costs is so negligible compared to the awesome factor. It’s a goddamn hand-glider. Those pesky Nethers can teleport all they want, I’m just gonna flip them the finger as I glide above. You know, before quickly putting the hand back on the glider because you really shouldn’t try to steer one of these things single handed.

I may have become sidetracked. But here’s my closing comment. Put hand-gliders in DayZ. Seriously. On another note, Nether is pretty damn good. I think Rock, Paper, Shotgun somewhat overstated the impact it’s going to have as it suffers from certain limitations it’s competitor doesn’t (the delivery missions especially seem like they will become more than a little repetitively boring) but, taken aside from that, Nether delivers a promising experience that is sure to get even better as it comes out of beta and into the fully formed version of a game that delivers on interesting new enemies, a wonderfully rendered world and flight. Welcome to your new apocalypse.