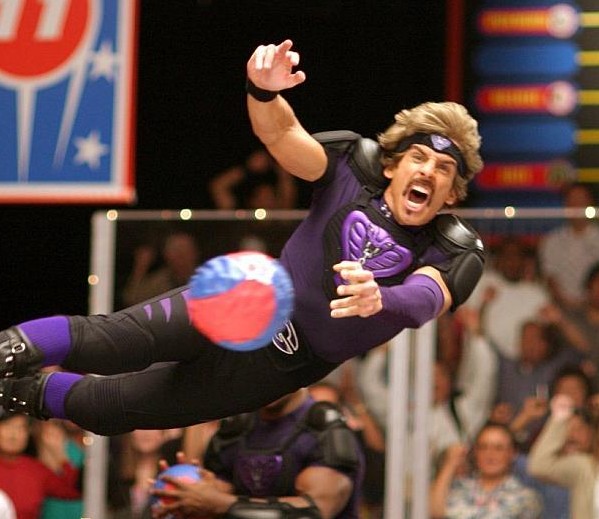 I’m loving, and yet also dreading some of the sequel announcements that are coming of late. A while ago we found that cult classic Anchorman was getting a sequel, and now another much-loved movie has finally confirmed the rumours of a sequel… and yes, Peter La Fleur & White Goodman are making a comeback.

Yes, that’s right folks – ESPN 8 “The Ocho” may well have more Dodgeball fever on their hands – the sequel to Dodgeball: A True Underdog Story has finally been officially confirmed, with Vince Vaugn and Ben Stiller filling their sweaty sneakers and playing with their (dodge) balls once more.

There’s also no news yet on wether Alan Tudyk,  Justin Long or Christine Taylor will be rejoining the cast – I’m sure that once the script is penned (as long as it doesn’t suck), they’ll return. In fact I think Long’s character gave me the most laughs, along with Tudyk’s Steve the Pirate.

Ben Stiller has commissioned Clay Tarver (Road Kill, Joy Ride) to write the script for the movie, with no official synopsis as yet… but the rumourmill has started up already, and the most plausible scenario is that Peter & White have to team up to combat an even bigger threat. Although what with White’s fitness level taking a nosedive at the end of the movie, it’ll be intersting to see how they approach it – I’m expecting a Rocky-style montage at some point.

Of course what with the writer just coming on board, there’s no ETA for the movie, or a trailer – however you can bet that with 2004’s Dodgeball raking in a nice $114m at the box office, I imagine we’ll have a wealth of information pretty soon.

Keep your eyeballs glued to Geek Pride in the future and we’ll bring you the details as soon as we get them.