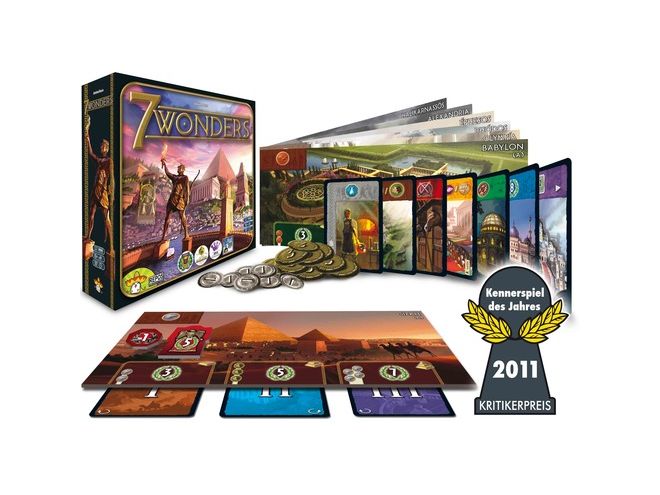 I’ve been into strategy PC games since I was a wee nipper. I didn’t go for the likes of gunplay focused Duke Nukem and the fast paced Crash Bandicoot that the rest of the kids were into – I preferred the slower pace, the longer game, the careful strategy; games like Civilization and Heroes of Might & Magic. Weird, I know. But it should then come as no surprise that in my boardgames, I have similar tastes. I like a game with a lot of angles, a lot of ways to win. This is one of the reasons why 7 Wonders is now my new favourite game.

Released in 2010 by award winning designer Antoine Bauza, 7 Wonders sees you take on the leadership of a Classical era city-state centred around one of the eponymous seven wonders of the age, including the well-known Colossus of Rhodes and Great Pyramids of Giza. So far, you might be wondering why I’m not actually reviewing the most recent Civilization boardgame, also brought out in 2010. My answer is twofold. Firstly, that game looks perhaps a little too complex at first glance, and secondly, my girlfriend and I recently read through this list on Paste Magazine. We want more people for our gaming groups, and 7 Wonders apparently fits the bill for getting people into the hobby.

Once you’ve been dealt or chosen your Wonder, you’d be forgiven for thinking that the winner of the game would be the first one to build the three stages of their Classical monument. Rather, the at the end of the three “Ages” which divide the game, being six turns each, the player with the most assembled Victory Points is the winner. So while building your Wonder will secure you ten VPs – more if you’ve got the Great Pyramids, or a special ability if you don’t – they’re not the only way to get points.

As the rounds of each Age of the game go by, players pass decks of shuffled building cards around the table, unique to each Age. Some cards produce a resource, some need a resource of be produced before they can be built. During the first age, players generally build up their resource production – though it is possible to trade with other cities to your left and right, and given the free-market nature of the trades, the other player can’t oppose you, but still gets the money you must pay them for their goods. These goods aren’t depleted for the other player either, meaning you can’t just keep buying next door’s stone so they can never finish their Wonder.

However, these resources will help you to build your own Wonder, strengthen your economy, or grow your military power, with the mightiest cities gaining victories or suffering defeats at the end of every age, based on the number of military points they have. These military victories get more important as the game goes on, with winning your final battles against your two closest neighbours in the third age getting you ten VPs – as much as most Wonders – the trade-off being you could have had a marketplace for cheaper resource buying, or an academy for more scientific VPs, instead of that siege workshop.

Because of this, 7 Wonders hits the cross-platform gaming sweet spot that I keep mentioning – easy to learn, hard to master; a game that’s simple enough to get your teeth into on your very first play through, but goes deep enough that you’ll want to take bit after bite. The more players that are in the game, the more cards are shuffled into the buildings decks, some of the cards only coming into the game when there are higher numbers of players.

The only criticism I can really level at 7 Wonders is that despite having rules for a two-player game, that one-on-one actually requires the two players to take turns controlling a third city. Obviously this means dumping less useful cards into the third city to strengthen your own, or having two chances to remove a card you know the other player needs. At least, in theory. In our first two player game, we ended up giving the third city all the science cards, not realising VPs from science weren’t just counted up – they were squared. So the card graveyard of Rhodes actually nearly won. Awkward.

But it is in the bigger games that 7 Wonders really comes alive, games where you’ve got to watch the player to the left doesn’t grow a larger military than you, while keeping your eye on how much money you’re giving to the right in exchange for their materials; meanwhile across the table you know they’re waiting on some more green cards – do you take that card out of play to build up your Wonder, develop your own sciences, or let them have it and upgrade your Victory Point buildings? Guaranteed, you won’t know the right call until the points are counted at the end.