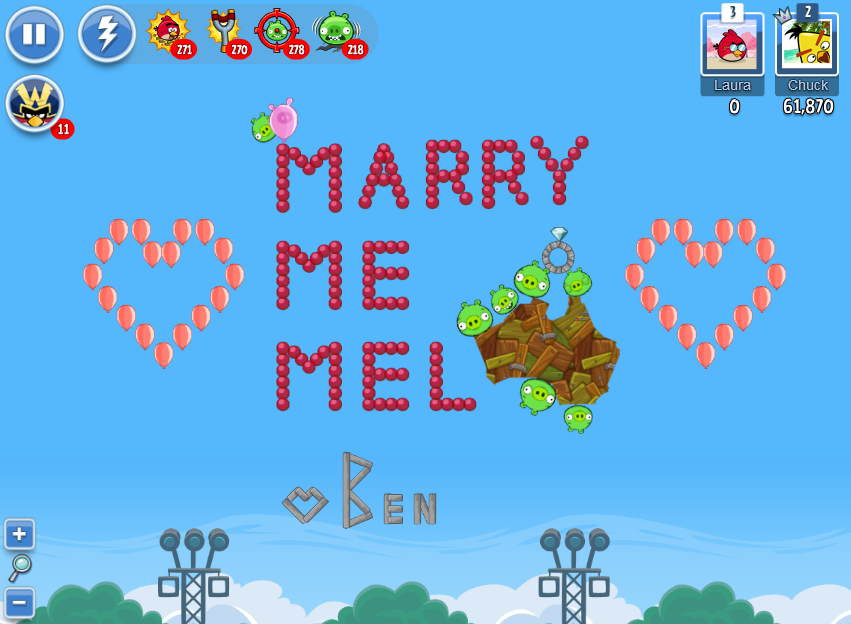 For those of you who are addicted to Facebook’s Angry Birds Friends to the point of racing to the computer every Monday morning to play the weekly tournament levels (it’s not just me, right? RIGHT?) then you will have already seen this, but if not then have I got a treat for you!

In the third level of this week’s tournament, a very special announcement arrived from a guy called Ben…

I don’t know who these people are (aside from the fact that their names are obviously Ben and Mel, and they are presumably Australian ABF addicts) but just on the off-chance they read Geek Pride: guys, you HAVE to have an Angry Birds wedding cake, or at least a precariously-balanced tower with piggie cupcakes on it.

(Note for the curious:  You have a red bird, a yellow bird and a big bird, and since the text is made out of rubber balls it’s pretty much impossible to not get all the pigs with one bird, so if you’re looking for a more challenging expression of love you’ll be disappointed.  My end score was 69,000 which I found much, much funnier than I should have.)