To be a geek or not to be a geek, it’s not really a matter of choice (in my opinion). 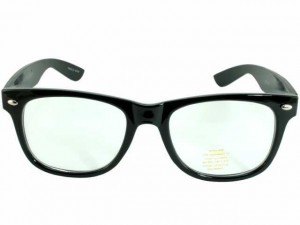 ‘Oh, you’re trying so hard to be hispter with your thick black framed glasses.’ Unfortunately not the case. These glasses have real lenses in. Feel free to take them from me but we’ll be playing a game of blind man bluff which will probably result in injuries or even worse, death. Saying ‘geek’ oddly reminds me of my time at school, especially during the latter few years. Glasses + ginger hair + braces = a total sore thumb in a sea of perfectly manicured fingers. I loved reading, had an obsession with comic book art -although I can’t draw at all, and I mean at all- and would rather be in playing a video game or watching a movie then going shopping with the girls.

It starts early, the symptoms: the ideas begin to cloud your mind that maybe you don’t think like everyone else. You start to realise that people don’t really consider it normal to quote lines from Lord of the Rings, and the disappointment sets in when they give you a blank stare. You accept the fact that not many of your other friends find themselves staying up late at night writing fiction about a television show or some characters you dreamed about. You understand that some of your friends’ ideas of fun are a bit more… ‘normal’.

I believe I was on the outside once. A particular instance was when I began to play Runescape, to impress a boy, of course (although I began to enjoy it anyway) and I found him referring to me as a ‘noob’. Of course I was upset, thinking I had been called some geek-speak alternative of a knob. I thought it was awfully harsh and I stuttered away, I say stuttered because the lag was that bad. I found myself a goblin to take my feelings out on. Of course, I don’t particularly consider myself a noob anymore, although Runescape has left my life and I find myself logging in to World of Warcraft late at night to play with my obsessed friends.

It is only when you accept the title and rejoice in all its geekiness- I mean, take me as a linguistic student finding it fun that you’ve got three sounds in geek, one vowel which is represented in the IPA as [i] and two plosives [g] and [k], one voiceless, one voiced… forgive me I got lost- that you can find the others who also dance under this umbrella. You find the others who also find their speech going one hundred miles an hour while you discuss the new episode of Doctor Who or the new Star Trek movie. You discover those who can do the arty hobbies you’ve only ever dreamed of, and greet them with excitement and only a pinch of jealousy. You can have a superhero-themed birthday and not give a crap what the ‘cool kids’ think, because you’re Thor and you’ve got a hammer only you can lift.

I’m not sure what this rant was about, I guess I’m just one for individuality, for not conforming and being as weird as you can be while still being happy. And while I accept people’s opinions about labels, I’d rather call myself a Geek proudly than have someone try and use it in a derogatory fashion against me.

I'm a movie lover of all genres, particularly comic book films, as well as some television shows such as Community. I enjoy fiction writing and blog writing and I sometimes dabble in reviews.
You might also like
blogGeekpersonal