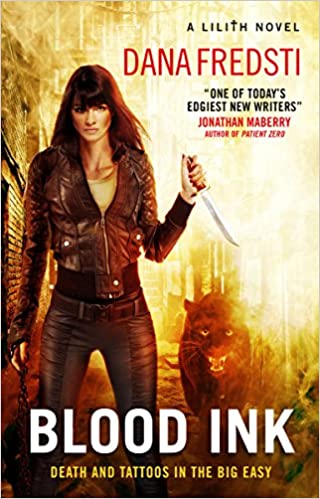 Blood Ink is the second novel in Dana Fredsti’s latest urban-fantasy/horror Lilith series (the first book, Spawn of Lilith, can be reviewed here).  We continue to follow the exploits of Lee Striga, as she navigates the challenges of being a stuntwoman in Hollywood.

This version of Hollywood is even stranger than the real thing.  It is the home for an assortment of supernatural creatures, from zombies to banshees, or “supes” as they are known.   Rather than preying on humanity, these creatures are jobbing actors and stunt people, using their supernatural abilities for special effects.

In the first book, Lee had assumed she was a normal stuntwoman, it is revealed that she is a daughter of the biblical entity known as Lilith.  This revelation brought with it numerous challenges, to say the least.  Following the climactic events of the previous novel, Lee is struggling to find work.  Apparently, few people want to hire a stuntwoman who once killed a film producer, even if they were trying to summon shadow demons.

The events surrounding Lee as she struggled to find work were instantly engaging and made her a sympathetic character for the reader.  Everyone can relate to issues of trying to remain financially independent.

Eventually, Lee finds some work, but in New Orleans, following which hijinks ensue.  Blood Ink immediately immerses the reader in the city, without bogging them down in overly descriptive prose.  Fredsti’s writing is vivid and evocative, whilst never sacrificing pacing.

Just as in her previous series (The “Buffy-with-zombies-but-different” Ashley Parker novels), Dana Fredsti’s writing brims with her take on girl power.  This is not saccharine tawdriness, but being powerfully female without being overly feminine.  It is this grounded view of girl power that makes Lee Striga such an engaging character.

What stands out the most in Blood Ink is that the characters are fantastically written.  Each person has their own unique voice and moment to shine in the novel.  Reading the interactions of each character becomes an absolute joy, as they bounce off each other and continue to propel the story forward.

As the title implies, tattoos form a key part of the antagonist’s deadly ritual.  A lesser author might find themselves inadvertently portraying all tattoos as being evil, but Dana Fredsti carefully balances the ritualistic tattoo magic of Blood Ink with the benignly beneficial tattoos.

Blood Ink builds to an apocalyptic climax that is gruesomely Lovecraftian.  Rather than relying on a festishistic number of tentacles, Fredsti relishes in repulsing her reader by evoking the sheer alienness of the creatures.

This being the second book in a series, there are a significant number of plot threads left unresolved.  Some of the character’s arcs are unfinished and several questions remain unanswered.  It is expected that many, if not all, will be concluded in the forthcoming sequel Hollywood Monsters (due for release next year).  There is a wonderful sense of a deeper mystery at play, simmering below the surface throughout Blood Ink, and Fredsti has said that she already has plans for more books in the series

Load more
Blood Ink by Dana FredstiBlood Ink is the second novel in Dana Fredsti’s latest urban-fantasy/horror Lilith series (the first book, Spawn of Lilith, can be reviewed here).  We continue to follow the exploits of Lee Striga, as she navigates the challenges of being a stuntwoman in Hollywood. This version...