Straight to the point: Worth it for avid Batman collectors.

Eaglemoss are well know for their collectible magazines having released the Batman chess set as well as DC and Marvel figurines. There latest edition is the Batman Automobila magazine. The fortnightly issues feature a different iconic 1:43 scale die-cast vehicle driven by the Dark knight throughout his history. It kicks off with the 1989 Batman Movie version featuring the Caped Crusader standing next to his Batmobile and a couple of oil barrels for effect.  Handily presented in a display case with a 3D lenticular of a explosion scene from the film the model is beautifully detailed and very cool.

The version I have seems to be slightly different to the version featured in the advertisement below as it is on an oval base.  I collect superhero toys and believe it makes an interesting addition to my collection. I think the model is almost spoiled by the poorly placed oil barrel props. When I opened it I wanted to look at it from all angles to drink in its full beauty but found the oil barrel placed at the front of the car takes away from the overall experience. I also think they may have missed a trick by not allowing the car to be taken off and played with, but I understand serious collectors won’t want to risk potential damaging the model. It was difficult to photograph the model in the case reflections and all that so here is a pic without. 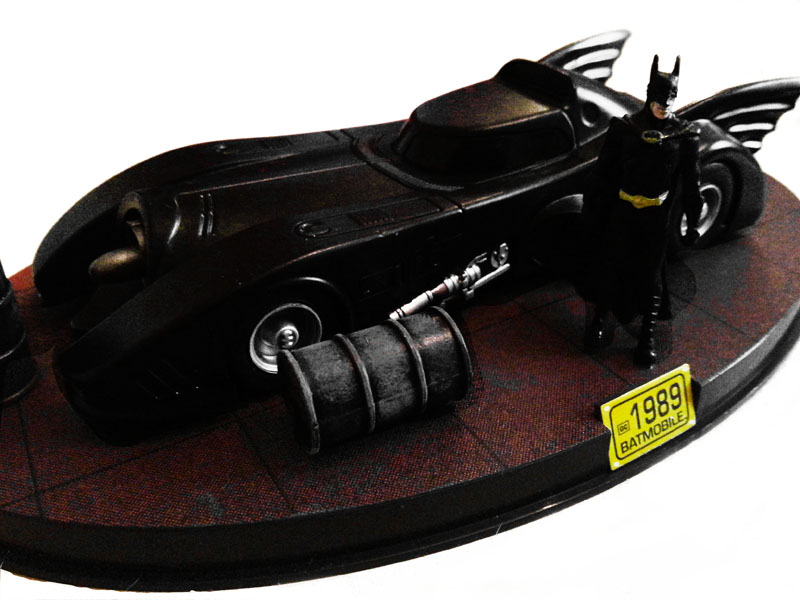 The magazine included is only 10 pages long but is packed with information about not only the vehicle specifications but also the role of the car in the film. It includes schematics and a four page fold out labeling all the gadgets inside and out of the vehicle as well as the specifications. The diagram is visually pleasing and interesting leading me to ask my other half questions that start “did you know….”. There is not quite enough information to build your own Batmobile, much to my five year old boy’s disappointment but you could certainly make a start. I particularly like last couple of pages detailing a round up of what was happening in the Batman comics of 1989, the year that would start with tragedy for the Batman with the Death in the Family story arc. 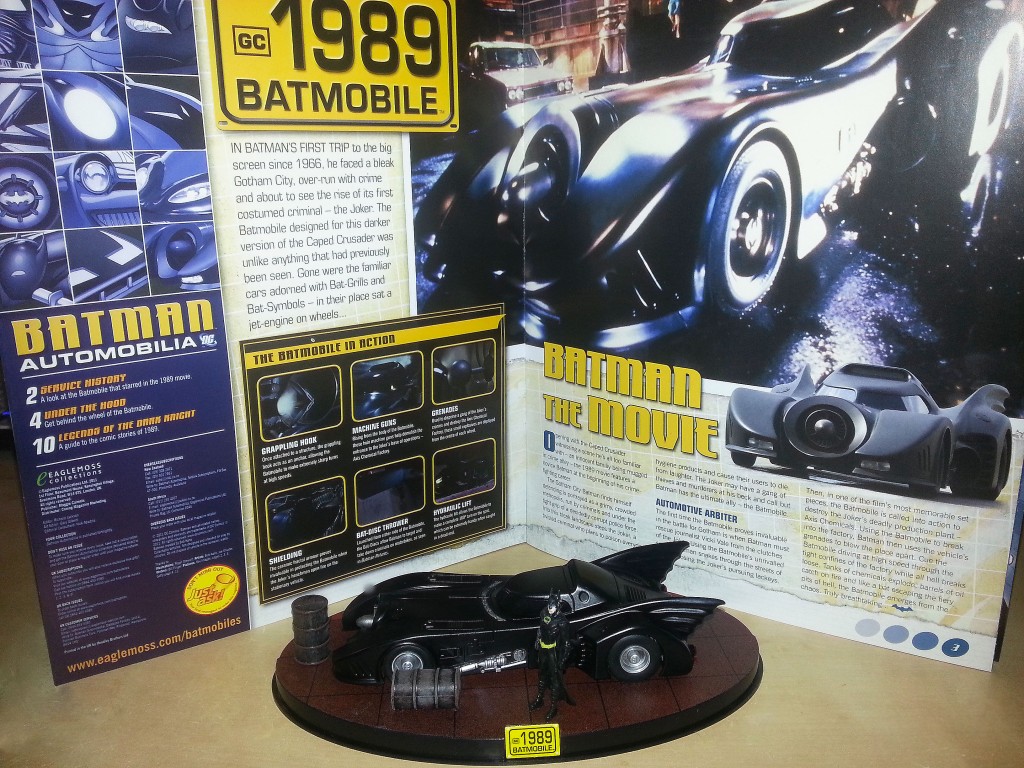 I did exclaim awesome when I opened it and I must admit it looks very cool in my superhero collection. In my opinion the oil barrels spoil the presentation a little but not enough that I don’t want to display it.  Personally the fortnightly price of £9.99 is a bit much and probably would have been better as a monthly issue. However you are a Batman collector and you like cars then I recommend this for you. I think if you are going to collect this then the subscription is the way to go. Not only does it means the issues are delivered direct to you door but they have some pretty wicked freebies thrown in, including what looks to be an awesome model of the Batwing.

Editor and occasional writer for Geek Pride! I prefer Star Trek over Star Wars, collect comics and wish I could be a superhero one day. I tabletop RPG as well as a little gaming, design the odd t-shirt now and again, update my Geek Parenting Tumblr and when I have cash to spend (which is rare) I scour the internet for Wonder Woman collectables. Also Doctor Who and Firefly rock!!
More Goodness
Batmanbatmobilebreaking