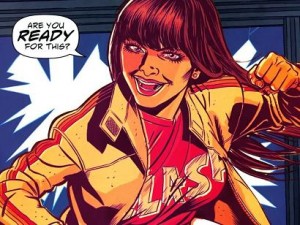 So, why am I reviewing Young Liars? A series that many people, it seems, still don’t know about it. Well, it’s because it has me confused, conflicted. In other series such as DMZ or Transmetropolitan I’ve associated with the characters and enjoy how they are portrayed. I enjoy their style and their writing; I really want to read more. Young Liars is different, because its author, David Lapham (Creator of Stray Bullets), has managed to create an air of suspense. I now have questions that won’t go away and I must find out how it ends! This is despite the uphill struggle I found it to continue reading. I would like to hope I don’t get disappointed in the style of the TV Series, Lost or Persons Unknown. Though sometimes I think I may just be a glutton for punishment.

The story centres around a suicidally depressed young man named Danny and his obsession with a girl called Sadie, it documents their adventures through Manhattan, New York. What makes this story mildly interesting isn’t the usual, father/daughter issues, it’s the fact that Sadie is going to die; whether anyone likes it or not, she has a bullet lodged in her brain that will surely kill her. Doctors are unable however to tell when she will die, and this bullet has changed her personality from a sheltered young girl into a woman willing to bite a man’s face off. Her father, the obvious billionaire wants his daughter back, but just as obvious she doesn’t want to go back. She just wants to dance or fight and Danny is so obsessed with her, he’s willing to take up arms against a group known as ‘The Pinkertons’ who are sent to bring her home.

With most graphic novels that I’ve read they all seem to focus upon a main character – however, the exception to this was The Walking Dead, a great series and a big tip-of-the-hat to Robert Kirkman for creating it. Young Liars involves a small group of friends, only one of which I would urinate on if they were doused in flames. There is Donny, the male cross dressing drug addict. A skin and bone waitress named Annie X, Sadie’s best friend who enjoys screwing band members, CeeCee & finally Truman Runco who reminds me of a more pathetic, clueless version of Nathan Drake (protagonist of the Uncharted video game series) in these opening three novels. The only member of this motley crew that I would give a damn about is Donny; he/she is written in such a nice way that you would find it hard to hate him/her. This is rounded off when, Danny, the narrator, tells the reader the story of Donny’s mum who screws Donny over for six grand and leaves him in the lurch.

I would state whether or not I think you should go pick up a copy of this series but unfortunately I have to sit on the fence until I myself read some more of it. I can’t say I’m particularly enamoured with the characters portrayed before me but I also want to know the main characters are inter-linked, who the Pinkertons are & finally just how screwed up this group of friends really is. This if you think about it, is a fantastic bit of writing from Mr Lapham making the readers want to keep buying his creation, to find out more about what’s really going on.

As an aspiring journalist I have found a home here at geek-pride, where I can write upon many subjects. If anybody has something they believe should be reviewed or newsworthy then feel free to send me a message, I always enjoy talking to people.
More Goodness
breakingcomiccomic books