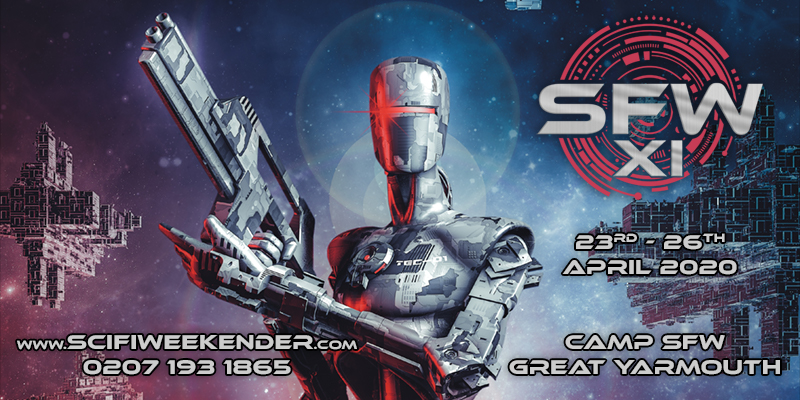 Take the greatest sci-fi convention you can think of, with great stars, authors, comic artists interactive entertainment and more. Throw in your best night out ever, including a mind-melting sci-fi cabaret, science-comedy quizzes, cosplay, and the best damn live music you can imagine. Add a few thousand like-minded people, and you’re close to what makes the Sci-Fi Weekender (SFW) so great.

It has only been four months since the dust settled from SFW’s tenth anniversary celebration in Great Yarmouth (reviewed here), but the mothership is already preparing for their next “Space Butlins” in April.

SFW XI will begin on the evening of Thursday 23rd April, with the SFW Awards celebrating the greatest of SFW’s guests – from film makers and actors, to artists and authors.  SFW kicks off fully on the Friday, with two days filled with talks, panels and entertainment that will cover every aspect of science fiction.

This year has a distinctly Star Trek theme, as Chase Masterton will be headlining the event. Chase spent five years portraying the Bajoran Dabo girl Leeta on Star Trek: Deep Space Nine. Her film roles include starring as a sultry singer in Yesterday Was a Lie and voicing Janice Em in the animated film Robotech: The Shadow Chronicles.

SFW will also have Robert Picardo, best known for his portrayals of the Emergency Medical Hologram (EMH) on Star Trek: Voyager and as Richard Woolsey in the Stargate television franchise.

Keeping us all safe will be the Enterprise’s Security Officer Tasha Yar, played by Denise Crosby.  Denise cemented her sci-fi credentials with roles on The X-Files and Lois and Clark: The New Adventures of Superman.

SFW will also have the eighth Doctor, played by Paul McGann.  Paul is best known for playing the eponymous ‘I’ in the cult classic Withnail And I. Other appearances include Alien 3, The Three Musketeers and Lesbian Vampire Killers.

For fans of a more literary persuasion, there will also be a slew of authors for you.

J R Park is a horror writer and co-founder of the Sinister Horror Company. Art house, pulp and exploitation alike influence his writing, as well as misheard conversations, partially remembered childhood terrors and cheese before sleep.

Bryony Pearce, a stalwart of SFW, is an award-winning author of young-adult thrillers and science fiction.  Her books include Angel’s Fury, Phoenix Rising, Windrunner’s Daughter and Wavefunction.

Kathryn Evans writes books that are a product of her weird reading history. Her latest book, Beauty Sleep, is a high concept with a Black Mirror twist. A Carnegie medal nominee, her debut More of Me also won the SCBWI Crystal Kite Award and the Edinburgh International Book Festival First Book Award – the only YA author ever to do so.

Matt Shaw is acclaimed for his ‘hard horror’ books and films. In 2018, Matt Shaw directed and produced his first feature film, Monster and, in 2019, he went on to produce and direct his second feature, Next Door.

As usual, David J Howe and Samantha Lee Howe, as well as the Telos Publishing team, will be running Author Central all weekend.

SFW would not be SFW without celebrating some of the greatest comic artists in the medium.

The inestimable Simon Bisley returns to SFW for his favourite weekend of the year.  Best known for his work on ABC Warriors, Lobo and Sláine, Simon has created some of the most powerful artwork ever to grace the pages of any comic – influencing a generation of artists that followed.

Simon Davis is a comics artist best known for his fully painted art work on Sinister Dexter, Black Siddha and Stone Island. More recently his talents were harnessed for the latest Sláine saga – the Brutania Chronicles – where his fine art style has found its natural home.

One of the true greats, Glenn Fabry is an Eisner Award-winning British comics artist known for his incredibly detailed, realistic work in both ink and painted colour. Fabry’s career began in 1985, drawing Sláine for 2000AD, with writer Pat Mills. He went on to paint the covers for Hellblazer and Preacher. In 2003 he drew a story in Neil Gaiman’s Sandman anthology Endless Nights, and in 2005 worked on the comics adaptation of Gaiman’s TV series/novel Neverwhere with writer Mike Carey.

However, it is not the guests that SFW is most famous for, but for the unforgettable night life and carnivalesque atmosphere.

Area 51 will be out in force with their kick-ass team in a set of choreographed set-pieces and walkabout characters. They’re planning a stage invasion or two as well.  The irrepressible Jim Credible will be doing his very best to steer the shenanigans before inevitably crashing onto the rocks on Sunday morning.

After a stunning performance at last year’s SFW X – Part 1, the Doctor and the Medics will be making a welcome return.  Formed in London in 1981, the group enjoyed success in the eighties with their smash hit singles ‘Spirit in the Sky’  and ‘Wateroo’.

Pirate-themed Jollyboat will also be making a return.  Inspired by the cult-comedy Amiga game The Secret of Monkey Island, they wrote a collection of pirate-themed parodies of pop songs.  This became an instant hit and it developed into an accidental career as comedy pirate brothers.

Notflix, The Improvised Musical, is all your favourite movies with 100% more songs. Featuring the UK’s top female improvisers and a full live band, Notflix takes your favourite

films and kicks away the dramatic tension with a big, glittery stiletto of uncynical joy; defying you to leave without feeling that life is a just a little bit more wonderful.

Fronted by comic book illustrator Nick Brokenshire, Blues Harvest have built up an impressive reputation as the go-to party band for geek events, having played their blend of Star Wars parodies and other classic movie songs in conventions and cantinas across the galaxy.

There will also be the return of Just a Minute, Fiona Angwin’s Behind The Sofa, a horde of special cosplay guests and the (in)famous cosplay competition.  If all that doesn’t leave you breathless with anticipation then there’s simply no hope for you …

SFW XI takes over Vauxhall Park from Thursday 23 to Sunday 26th April 2020 and tickets can be booked here.