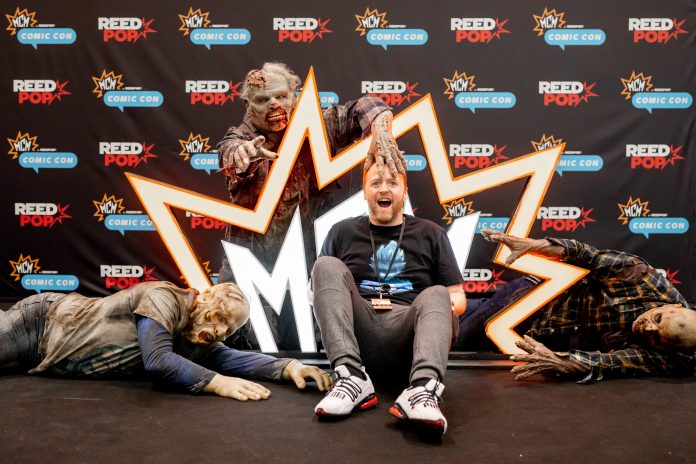 This weekend, MCM Comic Con – the ultimate celebration of pop culture – is back with bang! Great news for the fans, you won’t have to wait long for the first MCM hit as the UK’s most exciting pop culture event will be soaring into London’s ExCeL this weekend. Whether you’re a serious gamer, comic book collector, highly-skilled cosplayer, or passionate film buff, there’s plenty to explore at this year’s shows. There’ll be a jam-packed programme of celebrity talent, unforgettable panels from the best in the business, exclusive previews, live performances, independent creators and more! This year’s tickets are sponsored by and feature artwork from the award-winning open-world action RPG Genshin Impact.

Bringing the Summer festival vibes, MCM Comic Con May will see the return of the awesome MCM Fringe Stage, offering a smorgasbord of incredible live music, laugh out loud comedy and performing arts all in the great outdoors. Be transported back to the 19th Century with Old Time Sailors singing the very best Sea Shanty’s fit for the seafaring life. If that wasn’t enough, talented MCM fans can showcase the star within by wowing the crowd in MCM’s very own Talent Show.

For K-pop fans, anime enthusiasts and manga masters, delve into the Pop Asia section. A world where you can become an Origami pro with paper-folding magic by London Origami Society, try your hand at the unsung art of Manga drawing, learn to dance like BTS, join Ms Kayono for a traditional dance lesson, learn how to wear a traditional Yukata, or discover the ancient sport of sumo wrestling with an appearance and live demonstration from the current British Sumo Champion! The options are limitless…

Get your gaming fix and the become the best at the Side Quest zone. Whether your vice is modern consoles, retro gaming or tabletop favourites, enjoy a casual escape from reality with a free playing session or unleash your competitive side and battle it out in tournaments. For role-playing fans, OutsideXbox and DM Johnny Chiodini will return with another unforgettable live Oxventure D&D adventure. And for the budding artists among us, explore Artist Alley to find independent talented creators, get some tips and bring home some new favourite comics and artwork.

Live out your ultimate alter-ego fantasy at Cosplay Central, where the limits of outfit creation knows no bounds.  The best of the best can show off their skills and take to the main stage for the Cosplay Central Crown Championships, or cosplayers of all experiences are welcome to enter the Cosplay Masquerade. For those of us still learning, there’ll be unbeatable panels offering the best tips and techniques for kick-ass costumes and the unique Cosplay Hospital to fix any unplanned outfit mishaps. Best of all, MCM Comic Con is full of like-minded fans who are just like you. So why not make new friends who share your passion at official MCM photo meets.

A whole slew of guests have also been announced, such as anime royalty and cast of My Hero Academia actors; Justin Briner, Clifford Chapin, Aaron Roberts, Trina Nishamura, Kirsten McGuire and Kyle Phillips. Grab the chance to meet your heroes with exclusive photograph and autograph opportunities with the anime legends! Other legendary voice actors such as Janet Varney (Korra) and Dante Basco (Zuko) from the universe of Avatar, as well as Erika Harlacher – best known for her work for Genshin Impact, Demon Slayer and Hunter X Hunter – will also be at MCM all weekend for photograph and autograph opportunities!

For all the bookworms out there, meet some of the most inspiring literary legends with authors Laura Sebastian, Lucy Holland, Rym Kechacha, T.L. Huchu, Will Carver, Eve Smith, Matt Wesolowski, J.M. Miro and Samantha Shannon all gracing the MCM floor with exclusive panels and book signings. Looking for more fun? Ultimate British Pro wrestling champions and stars Bullit, Alexander Roth, Simon Millar, Claudia Bradstone, Charlie Biggs and Clive Jackson will be letting guests in on all the top tips and tricks for becoming a wrestling superstar at their exciting panel.

If that wasn’t enough, YouTube sensation TomSka will also be joining the star studded line-up, ready to meet and greet fans at his very own booth. Ru Paul’s Drag Race season 2 star, Tia Kofi will also be doing an exclusive Q&A on her biggest outfit inspirations, favourite fandoms and pro-tips on self-love on Friday.

Hunting for something a little more wild? Doug Cockle, who is most notably known for his role as Geralt of Rivia in The Witcher game series who will be available at MCM all weekend long! Fancy something a bit more magical? Dan Fogler, best known as everyone’s favourite muggle Jacob Kowalski from Fantastic Beasts, will also be meeting and greeting fans on Sunday 29th May.

Tickets on-sale now for MCM Comic Con London in May at www.mcmcomiccon.com/london/en-us/tickets.html