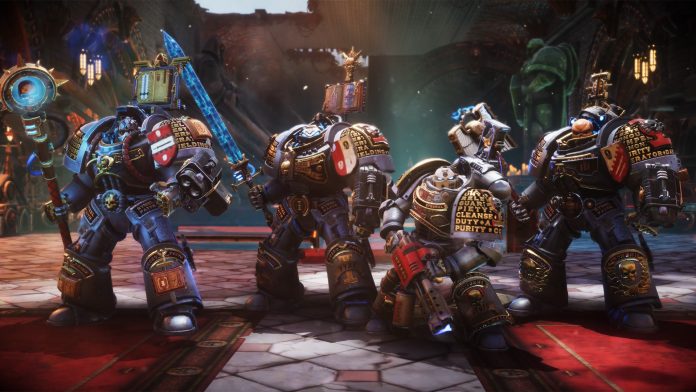 The latest videogame based upon Games Workshop’s expansive Warhammer: 40,000 setting has been released, with a title so long that is a sentence unto itself.  Warhammer 40,000: Chaos Gate – Daemonhunters, or just ‘Chaos Gate’ for short, is a remake of the classic 1998 turn-based videogame of almost the same name.

The release of XCOM, and its subsequent sequel, resulted in a modern renaissance for turn-based video games.  Since then, we have enjoyed the delights of Battletech (reviewed here) and Phoenix Point (reviewed here).  Until now, Warhammer had been strangely silent within this genre, which was surprising as Chaos Gate proves it is a natural fit.

In Chaos Gate, players control a squad of grey knights, a secretive order of space marines tasked with combating daemonic entities, as they seek to stop the spread of a daemonic plague.  Like other recent turn-based games, Chaos Gate is split into two sections.  The majority is as a turn-based tactical game, commanding the squad on a mission, but there is also a significant base management aspect, where players have to assign research, restore their crippled spacecraft and manage their units.

So far, so XCOM.  However, where this game shines is in the tactical gameplay elements, particularly in regard to the interactive environments.  Exploding barrels have become a staple of modern video games, but here pillars can be toppled and boulders thrown at enemies.

Controlling the grey knights is an incredibly satisfying experience.  Warhammer 40,000 lore established that the grey knights are an implacable force, and the gameplay reflects that.  Foes can easily outnumber the four-man squad and it is up to the player to prevent them being overwhelmed.

Chaos Gate is not just a reskinned XCOM, as the gameplay necessitates a different approach.  The overwatch mechanic, which allows units to fire during the enemy’s turn, has been noticeably weakened here.  Whereas in other games, units could huddle in overwatch waiting for enemies to come to them, in Chaos Gate that can lead to the squad quickly being overwhelmed.

The warp surge counter acts as a metaphorical ticking clock, which can be hastened by the squad using their special abilities.  Thus, should the squad take too long or use their abilities too much, a warp surge occurs, giving the enemy a significant advantage; such as grey knights losing health or enemy gaining reinforcements.

As such, the resulting gameplay encourages an aggressive playstyle, which is thematically appropriate for the bombastic tone of the setting.  Where else can you play a genetically enhanced space marine in power armour toppling pillars onto plague-infested daemonic cultists?

Unfortunately, this is by no means a perfect game.  There is limited mission diversity, with a vast majority of the missions being merely going somewhere and killing something.  After twenty hours of gameplay, there were no escort, retreival or defence missions.  As such, contiuously playing Chaos Gate for an extended amount of time can become monotonous.

There are also user-interface issues, as the layout is not as intuitive as it could be.  There are several instances where the cancel order option is hard to find.  This is compounded by the Esc key only being used to pause the game.

That said, these are minimal issues for what is an otherwise excellent game that faithfully recreates the over-the-top board game experience of Warhammer 40,000.  The writing, character designs and voice acting are excellent and immerse the player within the story.

Like most other turn-based games, Chaos Gate is challenging, but never feels unfair.  As Grey Knights gain levels and acquire new abilities, the enemy numbers increase and become tougher.  Cultists and gangmembers give way for chaos marines and sorcerers.  This ensures that the combat never becomes stale.

Chaos Gate may not be perfect, but what it does is done very well.  The gameplay mechanics executes a solid turn-based squad-combat game, whilst the writing and visuals perfectly recreate the tone of the Warhammer 40,000 universe.

Load more
Warhammer 40,000: Chaos Gate – DaemonhuntersChaos Gate may not be perfect, but what it does is done very well.  The gameplay mechanics executes a solid turn-based squad-combat game, whilst the writing and visuals perfectly recreate the tone of the Warhammer 40,000 universe.