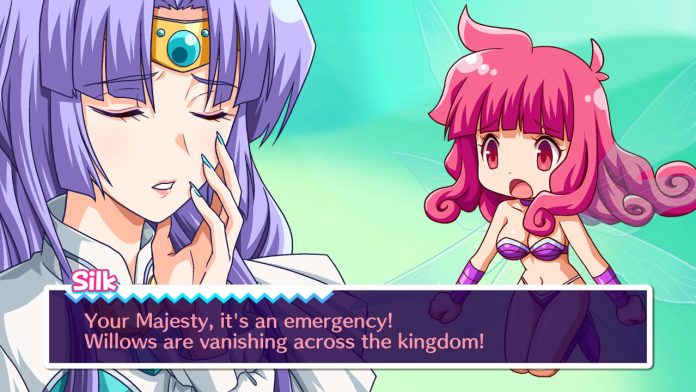 + Presentation is bright and engaging.

+ Some clever mechanics and variety in playstyles available.

– Overpriced for the amount of game there is.

Fast, frantic and colourful action that is perfect for a pick up and play, but wait until the price goes down before buying.

When we were offered Cotton Fantasy: Superlative Night Dream to review, there was a concern about the kind of game it was going to be. Fortunately, Cotton Fantasy is far more innocent than it first seems, weirdly proportioned character Silk not withstanding. It is part of the long-running shooter Cotton series that is over thirty years old. Described as a ‘Cute em up’, the game focuses on Cotton, a witch with an obsession for candies known as Willows and her sidekick fairy called Silk.

Cotton Fantasy has a story mode, but do not expect deep character progression or complex plots. In keeping with its light and breezy aesthetic, the story is incredibly short and used as an excuse to string the several the different levels together. Fairyland has lost its Willows, and only Cotton, the prophesied heroine of the game can save them. The fairy Silk is tasked with recruiting Cotton to find our where the Willows have gone, and that’s pretty much it.

There are snippets of animation and voice acted scenes between levels, which mostly revolve around Cotton being denied and lamenting the loss of Willows, whilst Silk plays the level-head that keeps her on track, and the inevitable friction this causes. Anyone familiar with anime on the kawaii side, will see where this is going.

This is where Cotton Fantasy really shines. The action revolves around side scrolling shoot-em -ups like G-Darius or the classic Einhänder, blasting enemies with magical bolts of energy before building up to charged attacks that clear swathes of baddies and even the projectiles they fling in your direction.

Amongst the items dropped by your foes are crystals and, depending on their colour, these will change the type of attack . A wide scatter of forward shooting bolts are blue, shots that track are green, whilst levelling up your character are yellow crystals. Shooting the crystals will also cycle them though the colours available, giving the player some control over how they proceed, although in the more frantic moments this can go out the window.

Seven different characters are available to choose from, each of which twist the formula described above. Mech-suited Fine collects crystals to increase her play time instead, losing precious gameplay seconds instead of lives when she dies. Tacoot uses a Wand to change the direction and range of her attacks. Ria does away with crystals entirely, asking the player to get close to enemy shots to charge a Buzz bar before unleashing a powered up shield.

The core of the game is collecting bells, which add a score multiplier for each enemy destroyed. Cotton Fantasy leans hard into the high score mentality, as every level ends with a ranking. Instead of ending the game when players run out of lives, their score resets to zero instead.

Cotton Fantasy has a bright and colourful aesthetic, backed up by an equally cute and vibrant sound design, much like the candles that Cotton is chasing throughout the game. It is a style that will divide many, as it perfectly matches the lively nature of the game, with so much appearing on screen at any one time.

The vibrancy of the graphics mean it’s hard to get lost on the screen, a common problem with shoot em ups. Ultimately, this felt endearing and charming, although the high pitched exclamations every time a character picked up a bonus item can become irritating after a while.

This is where Cotton Fantasy stumbles. The gameplay can quickly become repetitive, possibly except for players that chase mega high scores. As such, Cotton Fantasy feels like a five-minute filler.

The bright and engaging style, as well as the relatively simple mechanics (pull trigger, sometimes hold trigger). are ideal for a quick play, rather than dedicating a whole evening. At the time of writing, the Nintendo e-Shop has Cotton Fantasy at £35, which feels excessive for an hour or two of diversion.

Cotton Fantasy offers the exact experience it portrays; quick, light and frenetic fun with a heavy emphasis on getting those multiplier bonuses and high scores. However, despite the clever mechanics and purported variety in playstyles, it will quickly become repetitive, making it a low value proposition for most.

Load more
Cotton Fantasy: Superlative Night Dream + Presentation is bright and engaging. + Some clever mechanics and variety in playstyles available. - Quickly becomes repetitive. - Overpriced for the amount of game there is. Fast, frantic and colourful action that is perfect for a pick up and play, but wait until the price goes...