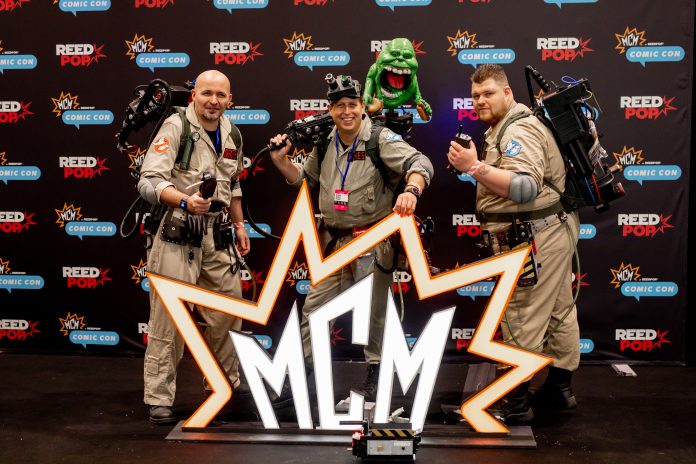 On the weekend of the 27-29 May, London played host to the returning mega convention that is MCM. Following the changing of hands, and finding their feet of hosting large scale events in a post-COVID quarantine environment, did this latest in London’s biggest conventions impress?

One notable difference this year was the debut of the new Elizabeth Line, which has a station right next to the Excel centre. This new drop-off point allows for unbelievably easy access to the convention without having to wonder where to go, enabling new and returning fans a smoother transition into the Excel centre. The staff at the station were particularly helpful in guiding people out of the station and into the waiting arms of the convention – many thanks for keeping me on the right track!

A particular favourite of mine at any convention is the Artist Alley, which was full to bursting with artists and illustrators aplenty. To run through the number of names would turn this into quite the block of text, but it was fascinating to see all the people there. Prices had apparently increased significantly for vendors, so it was lovely to see artists having their work adored and receiving commissions over the course of the event – I had to be careful, otherwise I would run out of space on my walls for all the fantastic art prints out there!

As with all conventions, there was a significant number of booths and events running to keep fans of all sizes involved and intrigued. Two of the largest – and most popular, going by the queue sizes – were the booths to celebrate Genshin Impact and the Halo Television Series. The Genshin Impact booth had by far the most popular queue, with a line of people snaking around the hall for people to try out the new event alongside some Tiktok starts and win a goodie bag. To keep people occupied, a massive screen ran the cinematic for the even, before being replaced with a picturesque set piece for professional cosplayers to take to the stage and invite people up to take pictures with them. Meanwhile, the Halo booth welcomed all convention participants to get a UNSC card and to see part of the first episode of the new television series released on Paramount +.

Oddly enough, this year’s guest list was heaving with wrestlers and whilst there were plenty of anime voice actors to balance it out, and was changing up until the final day – notable voice actor Nolan North dropping out of the convention the day before, with minimal announcements made regarding it to the surprise of convention attendees. Still, visitors were able see a number of their favourite actors take to the stage – such as Robert Sheehan.

Strewn across the convention floor were a number of stalls to engage and entertain users, with the return of lightsaber lessons in the middle of the floor, a steampunk R2D2 making its way through the crowd, Daleks rolling around here, there and everywhere, and a Bob’s Burger Van to celebrate the upcoming movie! There was even a side-by-side area of Steampunk costumes and a set made to celebrate the final season of Stranger Things, complete with Demogorgon and void entrance to the Upside Down to pose alongside. I was surpised there was no set for the upcoming season of The Umbrella Academy, but all in all it was a great turnout.

With the Excel centre packed on either hall, it was hard to notice at times that there were a reduced number of stalls, due to the event being absolutely buzzing. Cosplayers here there and everywhere of all sizes, parents and children watching in awe as figures from the pages of comic books strode before their very eyes. At peak times, it was a little claustrophobic, and I completely empathised with the people running the stalls who had to content with wave after wave of people.

And I loved every minute of it*. It was something to see, as people walked about with pride in their home-made Gideon and Ms. Marvel cosplays, and I got the familiar urge to watch the original works to feel the excitement they clearly did – true story, the day after I bumped into an old friend cosplaying as a book character I went to Waterstones and picked up the book the moment I saw the character on the cover. Fandoms old and new got their fair share in the spotlight, as they walked past you with memorable and unique takes on well known or niche but recognisable characters. Everyone walked home with lighter wallets, and a renewed sense of excitement and wonder.

Until October, MCM. Until then.

* My feet didn’t, but their complaints wouldn’t come until the next day.