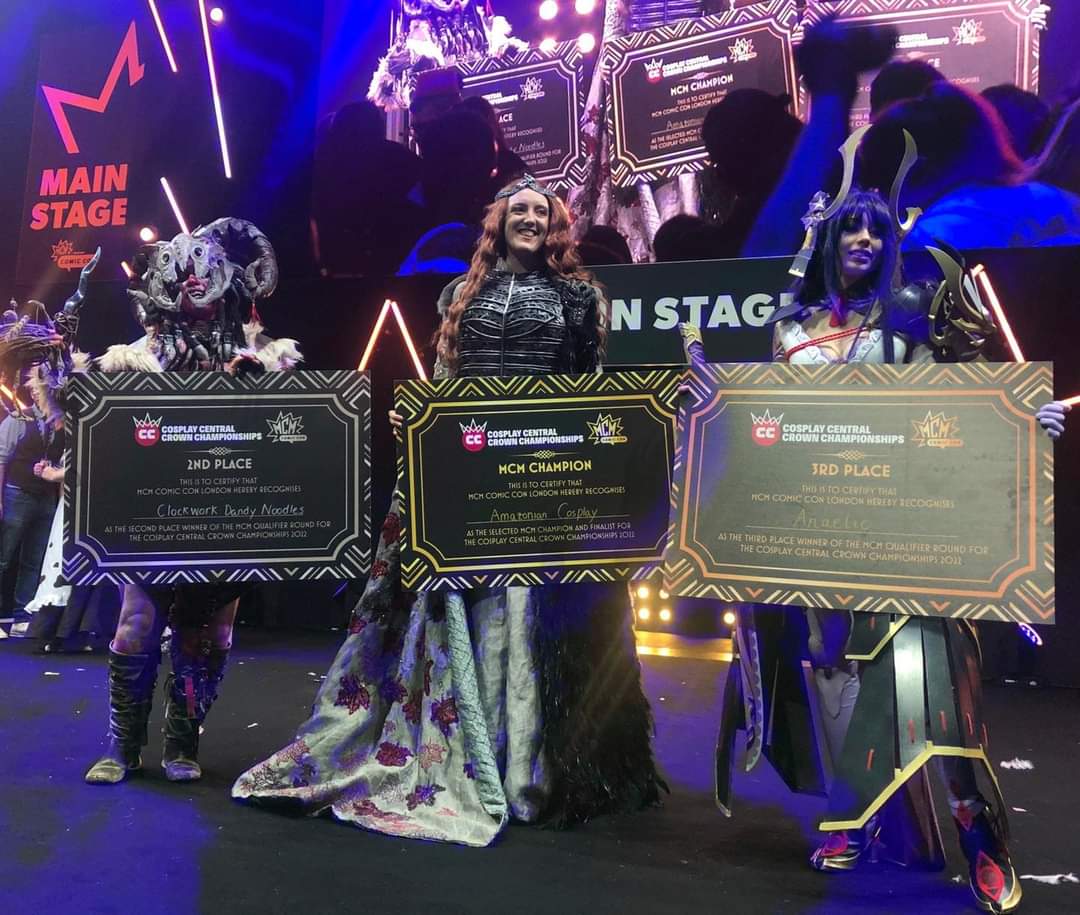 On Saturday, 28th May 2022, the Cosplay Central Crown Championships semi-finals were held at the London Excel centre, as part of MCM Comic Con – London (reviewed here). After taking first place, and becoming the UK representative on the global stage, Amazonian Cosplay spoke to Geek Pride about her incredible costume.

Who are you and what do you do?
I’m Beth, I’m from the UK, and I’m a cosplayer! I tend to do strong female characters, and have a penchant for elaborately detailed costume designs that have lots of embroidery, as I like to enter competitions with my builds.

How long have you been cosplaying and what first drew you to it?
I’ve been cosplaying for ten years this year. I was a massive Doctor Who fan as a teen, and stumbled across the cosplay Livejournal forum for the show. I decided to give it a go, and attended a small local convention with a badly made Amy Pond costume that had still had wet PVA glue on me.

Take us through your costume of choice and why you chose it.
My latest build is Sansa Stark from Game of Thrones. I’ve been recreating her Coronation gown from the final episode of the show! The second I saw it on screen I knew I had to make it. It’s a ridiculous costume. Most people who have planned to make it have since given up after seeing how much effort it requires to even do an amateur version of it, because of all the details!

How much time and money have you spent on crafting this?
Too much money and too much time, and I’m not even finished! I started working on it initially in June 2019, straight after the episode aired, then picked it up again when I was furloughed in March 2020. I worked on it pretty much solidly until now!Money wise, a rough estimate would be £3,000. However this does include a £700 embroidery machine, which will be used for many other projects, as well as over £1,000 being the fabric, as I purchased the screen used materials. I am never doing that again!

What new skills did you have to master for this costume?
Most of the techniques I used weren’t new to me, but this build pushed them to the next level and I had to develop them loads! My embroidery skills were absolutely pushed to the limits with the sheer amount needed on the costume, with so many different embroidery skill types (I stopped counting after 500 hours of embroidery) last year, plus the metalworking I did for the breastplate was far beyond the size of anything I’ve done before. My previous metalwork has been either jewellery, or small pieces like crowns and belts. I definitely haven’t made a solid steel breastplate for any other project! I’m excited for some of the skills yet to come as I upgrade/complete the costume. I’m going to be casting the tiara in silver with lost wax casting. which will certainly be a challenge. I’m also going to learn how to cobble shoes for the first time in the coming months, as I will make her boots from scratch.

What was your biggest struggle?
Getting the motivation to continue. Working 100 hours on a panel of embroidery and still no end in sight for the costume was a struggle. It’s not work you can rush, and I certainly didn’t want to cut corners after I had put so much money and effort in, so I just kept on trucking. Hand embroidery takes as long as it takes, and cannot be hastened, without lowering the quality level. Having the competition to look forward to, as well as the unfathomable level of online support I’ve received, helped keep me going.

What do you most enjoy about competing at this high level?
The challenge! As the competitions get bigger, so do my skill levels, as do those of the other competitors and judges. I enter competitions to challenge myself and force my skills to improve. I’m a big believer of only competing up. I no longer enter small events; Where’s the achievement after I’ve already proved success? A healthy competitive scene has you mainly competing against yourself, so I love that these competitions give me an opportunity to push myself, try new skills I wouldn’t have had the opportunity to, meet other incredible craftspeople and get feedback from skilled judges about how I can improve.

What would be your advice for someone wanting to start competing or start a complicated project?
There is nothing more valuable that research. Far too many times I’ve seen people dive headfirst into projects without adequate research, and end up making completely avoidable mistakes, and wasting a lot of money on materials that aren’t suitable. If it’s a live action costume, research how the original was made. If its not, look at how other cosplayers have achieved similar. Look into historical techniques, theatre costume rigging techniques. A successful competitive cosplay should have months of research and trial and error into it.

There have been many people across the world watching this build. What would you say to your supporters?
I hope you’re not tired of endless embroidery? The support I’ve been getting for this build has been absolutely insane and completely unprecedented. Literal millions of people have been watching me make this silly costume from a show no-one likes anymore, and cheerleading me the whole way. It makes it all worth it, having people come up to me at con and say that this build inspired them to try embroidery, or metal work, or entering competitions. Six years ago I was that person! It warms my heart.

And lastly, where can people find you?
@amazoniancos on Instagram and Twitch, as well as @megabethbob on Twitter. To see sexy close ups of embroidery, and all my other work, check out my website www.amazoncostumes.co.uk

The Cosplay Central Crown Championships is a celebration of the very best cosplay craftsmanship. The global final for 2022 will be held at MCM London Comic Con in October.