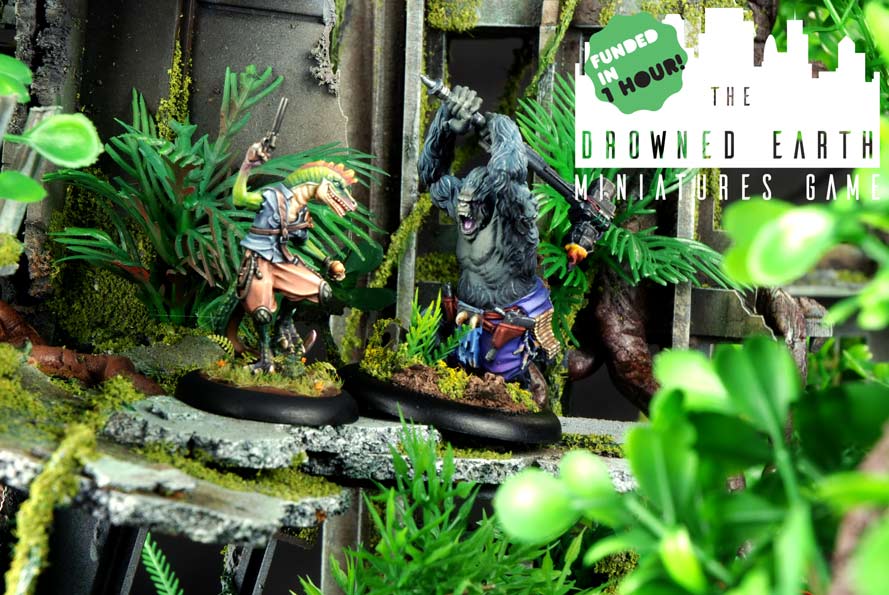 Sometimes a tabletop or board game comes along and really captures your attention, it’s new and different that does something unique. For board games, this year’s big new release is the Dark Souls board game which was one of the biggest kickstarters ever and really captured the vibe of the videogame. For tabletop games, many are thinking that 8th edition 40k will be a reboot the universe needs much like the End Times event did for Fantasy, but I am also quite excited for a new game set in a very very different world from the grim dark of the 41st Millenia… the game is called “The Drowned Earth” and it is on Kickstarter now.

The Drowned Earth Miniatures game is a smaller skirmish scale miniatures game that has been available on Kickstarter for the past few weeks, has picked up a lot of goodwill from across the gaming community and fully funded very quickly. It has now done so well it has gone past over a dozen stretch goals to unlock extra factions, several different dinosaur models, mounted models, custom dice/token sets and a full printed rules book. The Kickstarter will be running until the 16th May 2017. 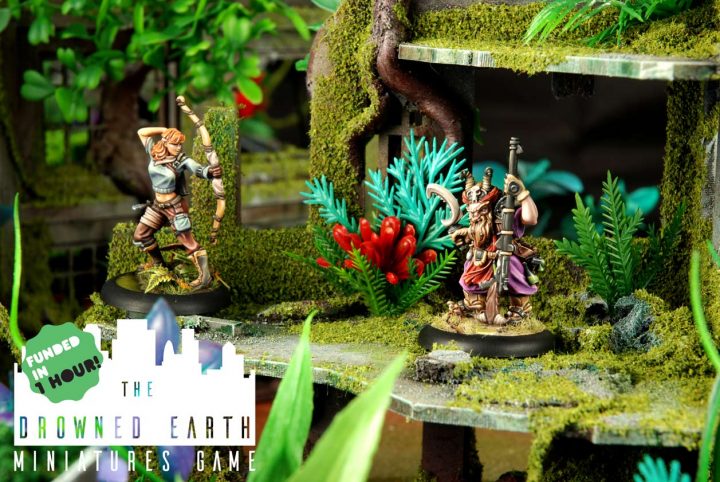 All of this was created by just one guy, something that should make you feel a little wary but the level of professionalism throughout the game, its rules, the miniatures and how the Kickstarter is progressing just makes it all the more impressive that one person was responsible!

The game itself is set several hundred years after a devastating cataclysm known as “The Event” wiped out the great civilization of the Builders, leaving only small groups of survivors on the continent of Ulayla. Since the Event, nature has slowly reclaimed the earth while pre-historic monsters brought back by the Builders are now a constant danger in the wilds. Now, after hundreds of years of mere survival the survivors which include humans, Gorilla uplifts called Berengeii, a lizard people known as the Sorrians and the tech minded Dverg, are slowly reforming society. These groups are sending out adventurers to rebuild in the ruins of the old earth by hunting for lost technology, fighting the local wildlife and battling for resources. 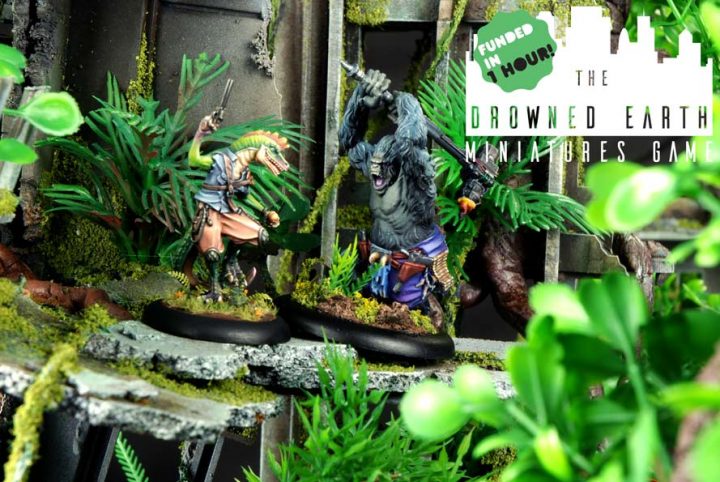 The Drowned Earth plays as a skirmish scale tabletop game using 5 (or more) 35mm models, played on a 3ft x 3ft table and uses a series of different skill checks using D10 dice. Having played several games, the system is quite streamlined with the basic mechanics of movement and skill checks being very easy to master. The game expands with more detail rules such as reactions and leader abilities give the game an enjoyable synergy. Another nice feature, that I feel many tabletop games do not really ever address, is the inclusion of rules for climbing/parkour and free running so your adventurers can traverse the battlefield without too many problems.

The designer has promised that the rules will always be available in a basic pdf format for free so that the game is accessible to everyone, I really like this idea as sometimes the entry price for a game with rules/tokens and other the miniatures make it a major investment. The main printed rules book is promised to contain a detailed background on the world and characters, as well as much of the amazing artwork for the game. 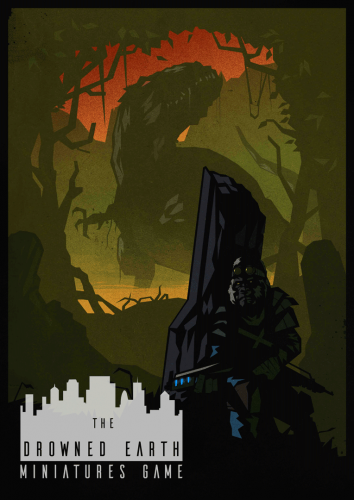 There are four different factions that have been unlocked in the Kickstarter, each comprising of a crew of five models each with different styles of play and hopefully each faction will be fleshed out with several additional characters in the future to give players a real variation in their crews. The Kickstarter allows you to choose between 1 and 4 of these factions well below their retail price as well as a bunch of other addons. 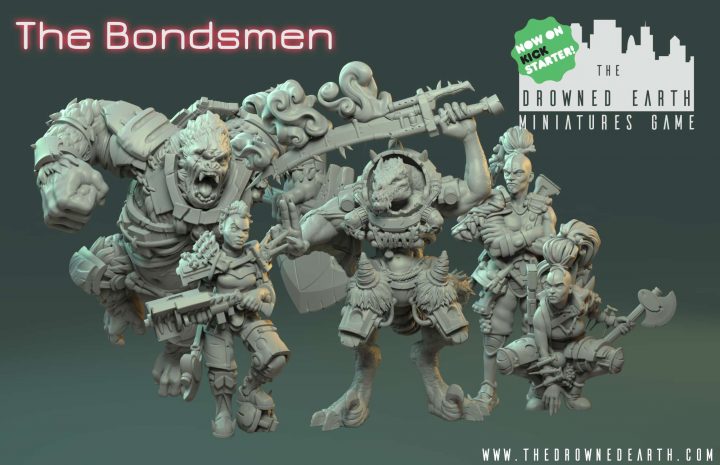 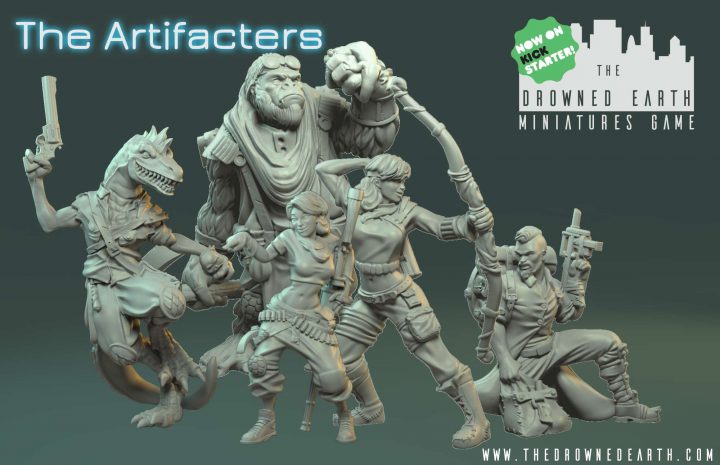 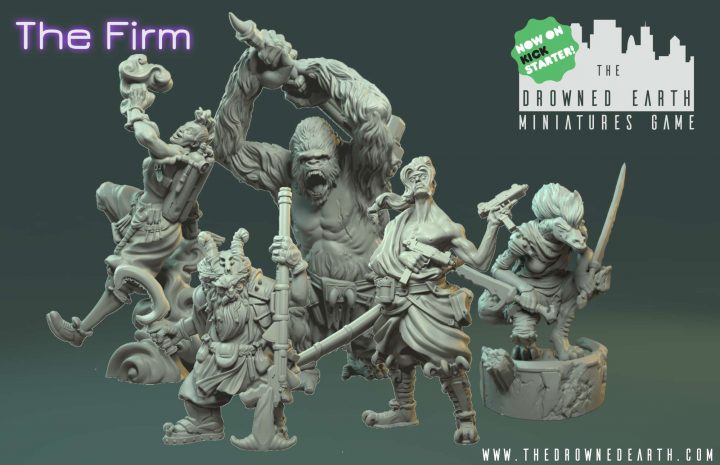 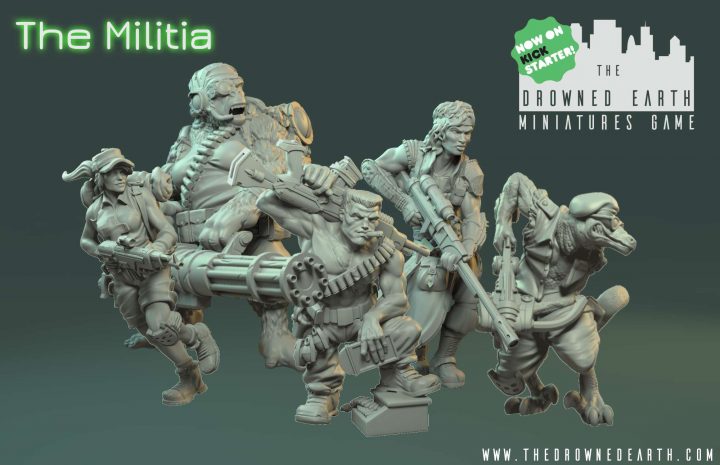 The Kickstarter has also progressed through over a dozen stretch goals to unlock several varieties of cool looking dinosaur models which can be added into each crew or used as neutral monsters in scenario play, expect to be muttering “Clever Girl” as some of these beasties eat your adventurers! 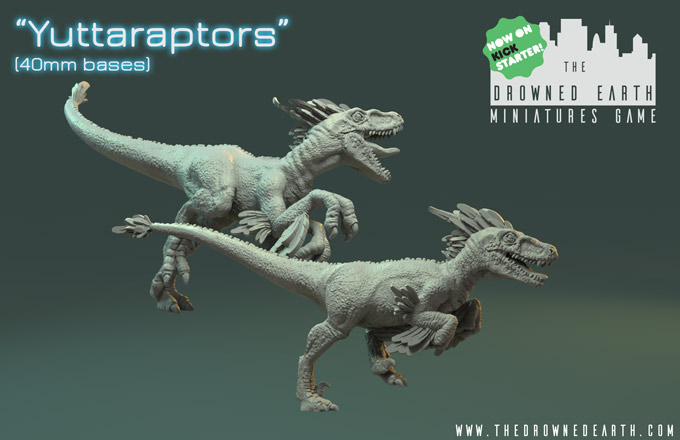 Each of the crew leaders have also got a mounted version planned, the renders look like they will make excellent centerpieces for each crew and might open up some fun variations of the crews. Right now only the Artifacters Nix on a Raptor has been shown so far but a live sculping event broadcast on Youtube did show the design team working on Kaneda, the leader of the crew called “The Firm” riding a giant preying Mantis! 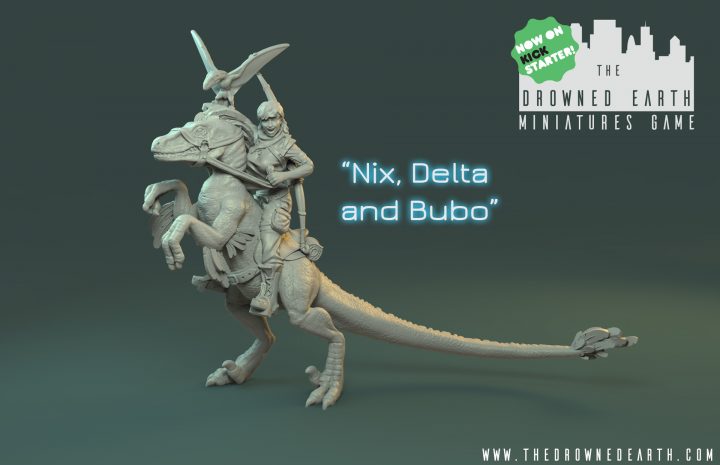 There will also be a series of mercenary models that players can use in their crews, designed with input from several Kickstarter backers. These “Mercs” will also be able to combine with a character designed via a “choose your own adventure” style community event run by the games designer to form a new fifth faction.

What has also been interesting is the community that is growing around the game, on social media, fan pages and in the comments section of the Kickstarter page. People’s imaginations seem to have been sparked by the rich setting of the world, the beautiful miniatures and the narrative gameplay style. Already I am picking out some old terrain and thinking how I might convert it to the lush jungle ruins or deadly swamps I would need for my games!

The excitement around the game was obvious at the major tabletop gaming show “Salute” a couple of weeks back where I got to have a go playing a small intro game and see the miniatures up close. The game was being demoed to hundreds of attendees throughout the day and a fantastic display board hosted a free-for-all “Hunt the Tyranex” event where dozens of brave players tried to bring down the Alpha Predator of The Drowned Earth to win prizes. Some succeeded but many met a grizzly end (myself included) but had a lot of fun as alliances were swiftly made between players and then traitorously broken at the last moment! 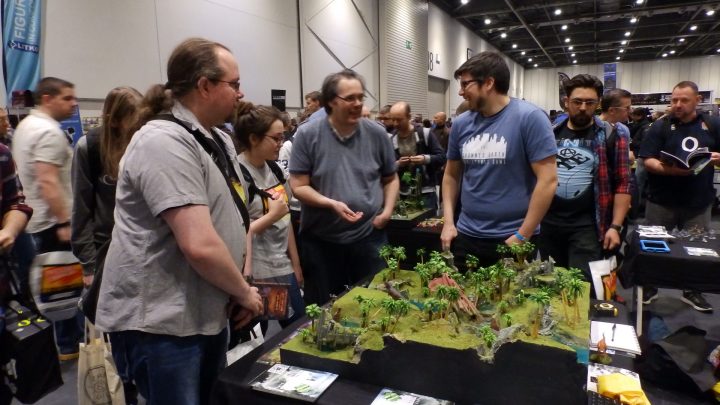 I really hope that this game keeps moving towards greater success, I am super excited for lots of games coming up including this one and having a greater number of choices as a wargamer is always a great thing. If you want to back the Drowned Earth you can fund the campaign here 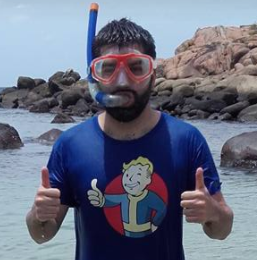 Thomas Williams
Enthusiastic gamer, from the UK but based in Geneva