Mexploitation, Round Two- Finally, a trailer for “Machete Kills”!

Tejano director Robert Rodriguez has been best buds with whitebread director Quentin Tarantino for over a decade, so when they both realized that they shared a love for trashy old action movies, they decided to do an homage to that. This became the “Grindhouse Double Feature”, a 4 hour extravaganza of them throwing back to the days of the grindhouse theaters and the drive-in theaters. If you’ve seen it, then you remember that you could make a case for the somewhat more memorable part- the trailer reel.

Trailer reels are a part of cinema tradition that continues today, in the age of high definition home entertainment. What made Grindhouse stand apart was that out of all the trailers they made, from Thanksgiving to Werewolf Women of the S.S., only two of these trailers were popular enough to be made into real movies- the disappointing “Hobo with a Shotgun”, and “Machete”. Here’s the trailer in question.

Danny Trejo, Cheech Marin, Michelle Rodriguez, Jessica Alba, Robert DeNiro, even Steven Seagal and Lindsey Lohan acted in this movie! Rodriguez winds up putting all the trailer moments in, and spinning a social commentary on the broken immigration system and border vigilantism throughout the American Southwest, while the film focuses in Rodriguez’ home state of Texas.

Rodriguez tackled this for a number of reasons. He’s spent his career giving a voice to Hispanic-Americans, and this allowed him to do that within the parameters normally assigned to Blaxploitation films, creating what some call “Mexploitation”.

The first announcement was the casting of the American President, given to actor who chose to take some time away from “winning”. Following that was the casting of Lady Gaga, Mel Gibson, Sofia Vergara, Cuba Gooding Jr., Vanessa Hudgens, the list goes on until we hit Alexa Vega. This got my interest.

One of the supporting actors in “Machete” was Daryl Sabara, famous for his role as Juni in the “Spy Kids” trilogy that Rodriguez directed, so it wasn’t too surprising to see Alexa coming in this time. What surprised me was the accompanying image from her Maxim shoot. 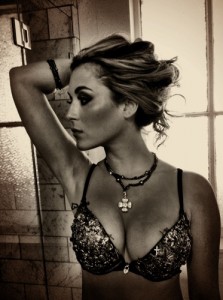 The big sister on Spy Kids, all grown up. And more than kinda hot.

Here’s what we know: Federale-turned-day-laborer-turned-assassin Machete Cortez (Danny Trejo) is contracted by the President of the United States (Charlie Sheen, listed as Carlos Esteves) to hunt down an arms dealer (Mel Gibson) that’s planning to launch a weapon into space. To aid him is ICE agent Sartana (Jessica Alba) and Network Leader Luz (Michelle Rodriguez), alongside fellow assassins Madame Desdemona (Sofia Vergara), Cereza (Vanessa Hudgens), Killjoy (Alexa Vega), El Cameleon (Cuba Gooding Jr.) and La Chameleon (Lady Gaga), it’s not known which ones are out to help our hero and which are out to kill him. Antonio Banderas fits in here somewhere, but it’s uncertain where and how.

Given that the sequel’s title on imdb has been altered to “Machete Kills Again…. In Space”, I can imagine where this is going. However, what perplexes me is why Charlie Sheen is listed with his real name.

If you’ve ever seen them alongside one another, you can’t deny the uncanny resemblance between Martin Sheen and Charlie. 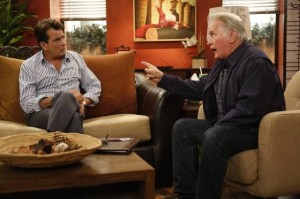 If you recognize that last name, it’s probably from Charlie’s brother Emilio. You wouldn’t think it, but these two are just as uncanny in the resemblance. 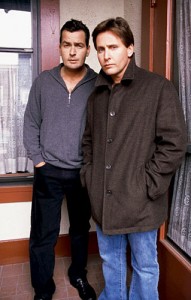 Martin Sheen was born as Martino Esteves. He got the acting bug as a kid, but during the 1960’s there wasn’t much work in the US for Hispanic actors. As a career move, he started using the stage name “Martin Sheen”, adopting his mother’s maiden name. He was an up-and-coming actor into the mid-70’s, with his biggest role being the cult classic Vietnam epic “Apocalypse Now!”. All four of his children grew up to be actors, but Carlos and Emilio were the most successful. Emilio chose to use his real name in an attempt to distance his career from his father’s, more or less striking it out on his own. This led to his stint with the “Brat Pack”, “Young Guns” and “The Mighty Ducks”. Carlos said “fuck that!”, and adopted the stage name of Charlie Sheen.

Even more to rely on daddy’s success, his first big role was landed by one of his father’s connections. You may not remember it, but he was the snot-nosed kid brother on “Red Dawn”, a film written and directed by John Milius (an associate of Martin’s, as John also wrote “Apocalypse Now!”). After that was “Platoon”, following in his father’s footsteps in another anti-war Vietnam film shot in the Philippines. This led to a string of military movies, even a collaboration with his brother in the first “Young Guns”. His career took a 90 degree turn with “Hot Shots”, resulting in him spending the rest of his career in comedy. The drugs, pornstars, and string of divorces came much later.

Really, the fact that he was cast for “Machete” surprised me, but even more surprising was him choosing to use his real name. My best guess is that either he wants to change, and is showing this by using his real name, or the fact is that this is a movie centered around hispanic actors. What says “Viva Mexico!” better than a Mexican in the White House?!

Maybe I’m distracted. Maybe I’ve had a few too many tacos in my life. Maybe I’ve got some weird hard-on for homage directors. The fact is, I’m stoked for “Machete Kills”. I think you should be too, but I know that I’ll happily wait in the theater to see it.

An aspiring filmmaker coming from a military family, my solitary life allowed me to gain an intimate knowledge of geekdom. I specialize on horror and military, but I am also knowledgeable on science fiction, fantasy, comic books and classic cartoons.