Much Ado About Nothing – Joss Whedon

Much Ado About Nothing

It seems all I do these days is watch Joss Whedon related stuff. It was theorised that I must say ‘Joss Whedon’ at least once or twice a day. So here I go again, but, just to prove those that think I’m biased and blinkered wrong, I’ve watched Kenneth Branagh’s version of Much Ado About Nothing too. So there.
Joss Whedon is a busy man. Whilst shooting The Avengers he had a break and in that break filmed a classy black and white version of Much Ado About Nothing from the original Shakespeare script. It was filmed at his house (designed by his architect wife, Kai Cole) in Santa Monica over 12 days. He was convinced to take a break from his busy schedule and chose to make this film as his relaxation, surrounding himself with friends and familiar actors (apart from newcomer Jillian Morgese). This lends the film a relaxed air that was intentional according to the man himself. I watched it with commentary too…twice. It’s very good. 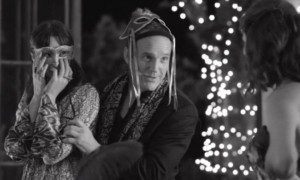 For those unfamiliar with the original tale, it is a comedy of errors. The entire play is based around a group of people lying a lot to each other. Leonato (Clark Gregg, the part was originally intended for Anthony Head who was unavailable) is a politician who lives with his daughter and niece. Returning from a distant war is Don Pedro (Reed Diamond) and his group of faithful soldiers who later pair off with the ladies of the house. With Don Pedro comes his brother, Don John (Sean Maher) who is a criminal kept in the company’s custody. Beatrice (Amy Acker) and Benedick (Alexis Denisof) are the focus and are locked in “a merry war” of words, they essentially spend the majority of the film ripping into each other verbally. Claudio (Fran Kranz) and Hero (Jillian Morgese) are a young couple to be wed. Don John wants to throw a spanner in the works so begins a web of lies to ruin everything and besmirch Hero’s honour. Meanwhile Leonato, Don Pedro and chums try to set up Beatrice and Benedick (who seemingly detest each other) using a web of lies and gossip.
He wanted to film this particular Shakespeare play after doing informal Shakespeare reading at his house, a tradition that started ten years ago. During this time “Alexis and Amy were kinda the rockstars” and after watching them play around with the roles of Beatrice and Benedick, Whedon resolved that if he were to shoot Shakespeare, this would be it. Whedon refers to the film as a “production” saying that because the play is so old and well known, every potential director has their own take on it. Rather than reinventing it “you take your place in the pantheon”.
The film begins in silence with an awkward scene in which Benedick sneaks out of Beatrice’s bedroom, whilst she pretends to be asleep. This choice to give their characters sexual history puts the rest of the tale in better context. The idea that they were once lovers stems from a later line of Beatrice’s: “I know you of old.” Previously, this line has been a throw-away, merely suggesting that Beatrice is jaded as if she means “I know your type”. Knowing Bendick in the “biblical” sense makes their bitter war of words more relevant as they have “unfinished business”. 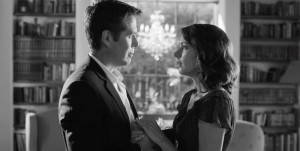 Another interesting take on the original was to cast Riki Lindhome as Conrade, Don John’s follower. This is usually played by a man but Joss Whedon argues that this choice makes their scenes more intimate.
In the commentary, Joss Whedon admits that he “doesn’t usually rewrite Shakespeare” but in the case of Benedick’s line “If I do not love her, I am a Jew” (a product of the prejudices of Shakespeare’s time) he tweaked “Jew” to “Fool”. However, later when Claudio exclaims “I would love her were she an Ethiope!” it is left in. Claudio is made to look foolish (and racist) as he is placed directly in front of a black woman as he speaks the line, legitimising the line in an unwitting awkward moment.
His decision to make the film in black and white was not a difficult one. In the commentary, Whedon explains that he wanted a classy, relaxed, film Noir style. This is definitely achieved as the party scenes in black and white mirror the sea of suits, cocktail dresses and French maid outfits (for the waiting staff). This use of contrast gives the busier scenes a sharpness that is used in typical Noir style when we see Don John in profile, plotting in a real “plain-dealing villain” moment. His only regret was that they could not shoot in colour when Benedick and Claudio talk about Hero, as it was filmed in a bright pink room.
Joss Whedon wrote the music himself and his brother Jed Whedon produced it. The lounge-Jazz in the party scenes adds to the high-class relaxed style. The poem that is used as the opening of Kenneth Branagh’s 1993 film was used instead for the party scene. The quote “Sigh no more, ladies, sigh no more” was converted into song for one of the readings ten years ago that Jed Whedon and Marissa Tancharoen perform.
The entire film was shot in and around Joss Whedon’s house. This meant location scouting involved “wandering around his own house with a cup of tea, imagining Shakespeare”. His house also has crawl spaces throughout the house which made the spying sequences easier. The play revolves around the distorted perceptions of the characters of each other. These shots where characters can half-see the action reinforce the idea of distorted perception.
The inclusion of a photographer adds to this idea of perception, spying and constant observation. The main characters are powerful and wealthy so, in a modern context, makes sense that there would be a media presence. This photographer later becomes a wedding photographer, bringing this theme throughout the film.
Borachio (Spencer Treat-Clark) is another of Don John’s followers who facilitates the biggest lie of the production. He manages to trick Claudio into believing that Hero, his betrothed, has been unfaithful to him. Usually it is supposed that this character is just mischievious and does it to please Don John. Instead it is implied that Borachio is in love with Hero making his motivation more personal and much darker.
Along with this darkness there are a lot of laughs. It is a comedy of errors after all. There are some very funny lines but they could be all but lost in the Shakespearian dialect to those unfamiliar with the play. All the comedy comes from the expert physicality of the actors. Dogberry (Nathan Fillion) and Verges (Tom Lenk) are the comedy relief, the Watch that uncover the injustice perpetrated by Don John. Their slapstick humour and ad libs create comedic relief in much of the play. 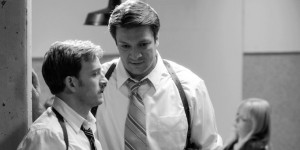 Benedick is also the focus of much of the humour. The ease of his trickery and instant switch from resolute bachelor to love-fool is often unbelievable but Alexis Denisof performs the lines with such over the top silliness that makes the ridiculous believable. The best example of this is when he is overhearing his friends talk about how much Beatrice loves him. He listens in from outside, commando rolling and evading their gaze. Afterwards, when he is invited in by Beatrice who knows nothing of his deception, he decides to talk with her while working out on the grass in an effort to impress her. His over-enthusiastic exercising and Amy Acker’s expression had me in stitches.
Joss Whedon points out that, as they are all actors that are familiar to each other, the relaxed, familiar setting led to a lot of impromptu ad-libbing. Nathan Fillion and Tom Lenk bumbled into one another and Sean Maher stealing a cupcake are definite high points. On the subject of Sean Maher’s cupcake adlib, Whedon says “he just destroyed a family, you deserve a cupcake!” 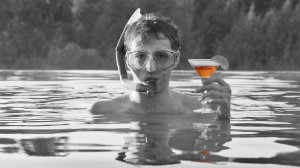 I could and will watch this film again and again. Joss Whedon modernises the script without making it obvious or gawdy (Baz Lurhmann) and sticks to the light-hearted whimsical wit of the text without detracting from the negative implications of the lies and mischief (sorry, Kenneth Branagh). The commentary had me in stitches more than the funniest lines of the film as Joss Whedon makes light of some of the excellent ad libs of the actors.
If you are a fan of Joss Whedon you will be treated to a stellar cast of favourites from everything he has made before. He uses the text in the same natural way that he writes dialogue. Fans of Shakespeare should enjoy this witty, fresh take on a very, very old classic. Film students will have a field day with the lighting, staging and visual shots.
I am heavily biased towards Whedon’s and Shakespeare’s work but not just for the sake of it. I would rate this somewhere between “Ace” and “Masterpiece” but don’t just take my word for it…watch it, you won’t be disappointed.

Owen was born with a S.N.E.S controller in his hands and now works in a comic book shop and pretends to be a pirate on occasion. He has an unconditional love for the works of Joss Whedon, Felicia Day's face and Leek and Potato Soup.
More Goodness
breakingClark GreggJoss whedon