Straight to the point: Vikings will draw you in and take you for a violent, blood sodden ride that’ll leave you wanting more.

Vikings is written by Michael Hirst (Same writer of award winning The Tudors) for the Canadian television channel History. This gem of a TV series that is Vikings seemed to have slipped by most of us completely unnoticed, similar to that of an exceptional Ninja. If it weren’t for LoveFilm’s continuous in your face advertising, it may have dodged me entirely.

After Starz left me wanting on more Bloodshed, Sex and over the top violence, I dug straight into Vikings, eager for a tale set in a world of action and bloody storyline. The story starts in 793 and we follow the tale of a common warrior, Ragnar (based loosely upon the Viking legendary Hero) and his quest to travel to the unknown west where a land called England is ripe for the raiding. With it we witness his rise to greatness.

Several critics have criticized the writer’s inaccuracies when it came down to Viking society, but I managed to bypass this inaccuracy in favour of decent plot and likable characters. Especially when the show opened up with two heavily bearded men fighting what looked like to me English militia in a display of medieval martial glory, topped with a healthy splatter of blood.

After the initial pilot episode grappled with me and wouldn’t let go, I started watching them one by one, unable to stop. It has a certain hook in its strong, Nordic grasp that doesn’t let go easy. Frankly, I was disappointed when the first series ended. 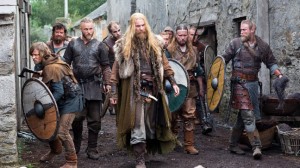 The “Crew.”
Look at them glorious beards.

Vikings, despite its inaccuracies, displays a wealthy array of Nordic religious rituals on screen which may or may not have actually occurred during that period of time. One being a very violent and gritty scene of mass sacrifice to please the Gods. This added tons of flavour to the story for me, even if such things never happened. It’s not always about gratuitous gouging of your foes flesh and dismemberment of their limbs in combat. I’m looking at you SPARTACUS!  It has the right feel to it that kept me glued to the screen.

Do not get me wrong, Vikings presents quite the bit of violence on screen. There are Viking shield walls, personal combat between two aggrieved parties, sibling rivalry, swords to the face, axes to the vertebrae and kicks to the balls a plenty.

I remember watching Lord of the Rings and thinking, “wow, this scenery is amazing.” Putting the epic budget of the trilogy aside and coming to Vikings, you realise some of nature’s remarkable beauties. The entire season is set in Ireland rather than the Nordic regions itself, but you wouldn’t know it. Vast cascading waterfalls rush down cliff sides, fields of verdant fields and forest litter the eyesight in awe inspiring splendour. Some of the landscape shots will have your jaw dropping.

And if you’re not into that kind of stuff, well focus on the men shoving sharp pointy metal weapons into each other. That’s always fun.

Towards the end of the season the show takes a darkly sweet twist and adopts a murky look to their way of life, employing illnesses, sexual temptations and some small political manoeuvrings. As with most historical dramas I expect a fair amount of misogyny. I was happy to see it fairly void.  All of the main women characters are strong, independent types. Ragnar’s wife is a Shield Maiden skilled enough to match him in combat and thus joins him in a successful raid. Once or twice in the series you see various shield maidens in battle too, taking the highlight of the action. 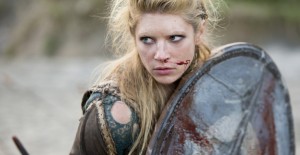 Conclusively, Vikings follows in the wake of a lot of historical dramas before it and manages to pull of something that works well. Once I started, I spent the entire weekend watching them all. There isn’t the over the top fight scenes of Spartacus or the advanced plot twists that brought us to tears lately that is in Game of Thrones, yet it’s got a healthy amount of both. It’s the Red Mage of Historical Dramas, exercising brutal realistic fight scenes that operate during a decent plot.

I will be anticipating the next series.