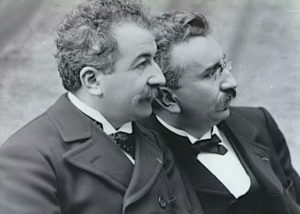 I’m going to be really geeky this week. I do try to find films in the public domain that are not only interesting but also entertaining, and maybe this week I’ll fail you on the latter, but how can I pass up the opportunity to discuss the very origins of cinema?

Auguste and Louis Lumière are revered as the men whose work formed the genesis of film as we know it. In 1895 The Lumière brothers perfected the cinematograph, the first film camera, and after patenting the invention they set about using it to create the first films ever recorded. 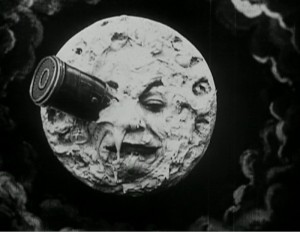 Now I did say that this feature may be lacking in entertainment value this week, and for that I do apologize. But purely and simply, these shorts are absolutely fascinating to someone as obsessed with cinema as I am. The events depicted are mundane; workers leaving a factory, a group of men playing cards, builders knocking down a wall. The first motion pictures were cases of the Lumière brothers simply pointing a camera at something occurring and documenting it. In essence what we see here is a test run for the medium of film, and it would indeed only be a few short years later that Georges Méliès would advance on the techniques of the Lumière brothers and create cinematic depictions of magic and illusion, culminating the classic A Trip To The Moon.

Having said all that, however, there are glimpses of growth even in these prototypes. A comedic sketch is performed for the camera in which a man waters his garden, and a mischievous prankster steps on his hose. It’s the classic routine, the gardener looking at his sputtering hose and prompting the jokester to take his foot off, unleashing a blast of water into his victim’s face. So simple, and yet so significant. Forget The Great Train Robbery, which I discussed in the very first Free Film Friday, this right here is the first film with a narrative plot. How about that? Comedy is the oldest film genre.

Speaking of The Great Train Robbery, I discussed how the closing gunshot had cinema-goers diving for cover. Well the exact same thing happened when that train came barreling down towards the Lumière’s camera. It was the 3D of it’s time, and indeed the very first cinematic jump scare.

I make no bones about it, I love things like this. Archetypes which have a tremendous charm in their naive, tentative but crucially adventurous nature. Take a moment, indeed six minutes, to have a look at these ground-breaking pieces of film and marvel at how far we’ve come. Every film that you have ever enjoyed can be traced back to these works and their enormously influential creators.

Prolific writer attempting to slowly take over the internet through various explorations of cinema, heavy music and everything in between.
You might also like
breakingcomedyDocumentary