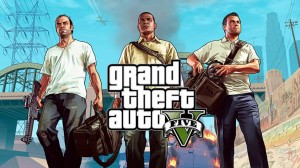 After  years of anticipation, teaser trailers and rumor, the biggest entertainment title release of the year has finally arrived and players across the world have Grand Theft Auto V in their hands. 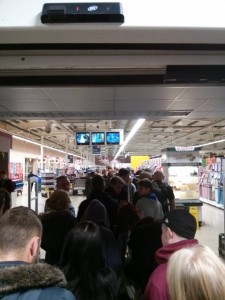 Matt’s view at his local midnight launch last night. Oddly we haven’t heard much from him today.

Despite some really nasty weather conditions across the UK, fans came out in force last night with hope of being one of the first to pick up a copy of the game at midnight. Our own Matt Walklate attended a midnight launch at his local supermarket and was greeted with a queue that stretched far out of the door and into the car park.

For those who ordered online and weren’t lucky enough to receive an early copy from Amazon over the weekend, forums are rife with complaints about late delivery from certain retailers whilst the Royal Mail have even taken to Twitter to promise additional deliveries as they struggle to keep up with the extra workload.

Games industry website MCV have reported that the game is set to break all previous sales records with a revenue of $1Bn worldwide within the first month alone and the hashtag #GTAV has been included in over 2 million tweets within the last 24 hours.

Review scores have been mostly positive with an average Metacritic score of 98 and journalists have especially praised the visuals, story and technical accomplishment of the virtual world. In our own review, I scored the game as a 5 out of 5, referring to it as “not only the single greatest video game of this generation but also as one of the most well constructed video games of all time”.

Of course, it wouldn’t be a proper GTA game without stirring up some controversy and many reviewers have called Rockstar North’s motives into question over a mission featuring torture and the game’s overall attitude to women. Gamespot’s Caroline Petit described GTA V as “politically muddled and profoundly misogynistic” whilst Tom Bradwell at Eurogamer found the torture unsettling and commented that the sequence “is not particularly effective without some commentary” from Rockstar. 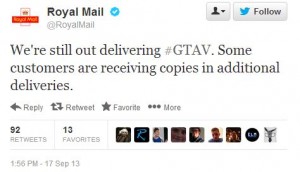 If you’ve yet to get in on the action, then there are still some good deals to be had for both the PS3 and Xbox 360 versions of the game in the UK.

Tesco are currently selling GTA V online for £38 but using the discount code TDX-DV73 at checkout will reduce the price of £33 and delivery should happen before the weekend.

Alternatively, if you don’t want to wait for delivery then the best deal on the high street is still to be had at Tesco where the instore price is £38 solo or £32 if purchased with any PSN or Xbox Live subscription/points card over the value of £17.70. If your local Tesco store have sold out then the next best price is £39.97 at Asda for both formats.

Be sure to checkout our official review below if you haven’t already and if you already have the game then let us know what you think. We may also be looking to set up a Geek Pride Crew when the GTA: Online launches on 1st October so stay tuned for further details.

A proud member of the Geek Pride video games editing team, Sai can currently be found trying to get through his Christmas games backlog (and failing miserably at it).
You might also like
breakinggeek dealsGrand Theft Auto