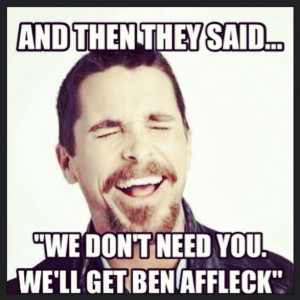 Since it was announced that Ben Affleck had been cast as Batman in Zack Snyder’s upcoming sequel to Man of Steel, the decision has received a huge amount of criticism. Well, in an interview with Jimmy Fallon, Affleck finally gave a response to taking on the role and the internet backlash.

41-year old Affleck remarked that originally he had his doubts about taking the role, believing that his age might be an issue. However, after seeing Snyder’s vision for the character of a ‘tired and weary’ superhero and very different to Christian Bale’s portrayal, the new actor was reassured that he was right for the role.

When Affleck accepted the role, he was warned by the studio that he might receive a rather negative reaction. He spoke with Fallon about being shown audience reactions to previous Batman castings and the hate actors received prior to films being released. On his briefing, Affleck commented ‘they send me [reactions for] people who were in these movies who did a great job and they’d say, ‘Kill himmmm!’

[quote]”I handle s**t, you know what I mean – I’m very tough. So I saw the announcement, I look at the first comment and it’s like, ‘Ben Affleck is going to be Batman’ and the first one goes, ‘Noooooooo!”[/quote] 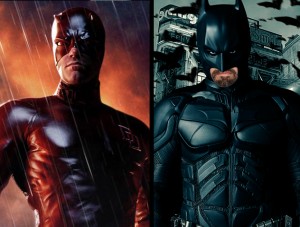 When I heard the announcement about Affleck’s casting, my response was pretty similar to the majority of folk, but you’ve gotta respect the guy. He’s well aware that an awful lot of people are against him playing the caped crusader and he’s prepared to deal with that. What we’ve got to keep in mind is that this isn’t a Batman film. It’s a sequel to Man of Steel that’s going to pit Superman and Batman against each other. Forget my doubts as Affleck as Batman, I’ve got doubts about the whole thing. With a role that’s been cast to so many different actors over the years, people are always going to disagree on a new guy taking over. Remember Adam West? We love him now, but I’m sure there were plenty of folk who hated the thought of him playing their favourite comic book hero.

I’m certainly not going to be in any rush to see the sequel to Man of Steel, and that’s not solely because of Ben Affleck playing Batman. It’s like he says in the interview, people make judgements on casting decisions before the film has even be released. I’m still not convinced, but when the guy hasn’t taken thousands of people petitioning for a new casting to heart and can joke about it, it does make you feel a little bad for signing it…

I'm an aspiring film journalist living in Chester. Into all kinds of geekery from N64 to Xbox, graphic novels, cosplay anime and more. I have an unhealthy obsession with Pokémon and the Legend of Zelda series. So much so that I have two Zelda tattoos and various Pokémon lurking all over my house. In my spare time when I'm not busy being a real person and working, I'm writing or making retro games jewellery. I'm also obsessed with pandas. They're fabulous.
You might also like
BatfleckBatmanbatman vs superman