previous
Episode 131 - The one where Nijinsky forgot to push the red button.... featuring the Playstation IV!
random
next
The Illustrative World of Matt Dixon

Hanging out with Orang Utan Comics at LSCC 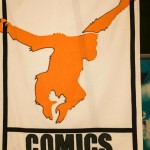 We have all heard of 2000 AD and Judge Dredd right?  Yes I hear you say, of course we have we aren’t all stupid, they are the biggest British comic book publisher and have huge success with not one but two Judge Dredd films!  Well okay, but how many of you have heard of Orang Utan Comics?  Ahh, not so loud now are you?  But a good fair few of you have and that’s good.  Well for those of you who haven’t heard of Orang Utan Comics where have you been? And shame on you! However, you’re in luck because while I was at London Super Comic Convention, not only did Orang Utan have their own booth, but their co-founder Ian Sharman was there ( he stood out immediately, being the best-dressed man at the show, in his three-piece suit and silver cravat.), and graciously took the time on the Sunday to have a chat with me. 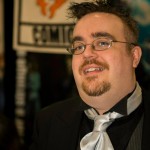 Greeting me warmly he told me how Orang Utan came about and how he got into the business. Starting in comics when he used to ink artwork he decided, one day, to send his work off to other artists.  Having received advice and guidance on how to improve his work started to wonder (in his naive youth) why he was not yet working on titles such as the ‘X-Men’; surely he was good enough? As time went on and the big break he was dreaming of didn’t materialise, Ian got more and more frustrated and, eventually just gave it up and left his comic book life behind him…. Now, now, calm down people, he comes back to us… Ian 2.0 if you like; back with a plan.  So anyway, where was I, oh yes… Ian left his comic books behind and does the ‘grown up’ thing of getting married, having children, and no doubt meetings with bank managers and looking at paint samples.

Many years down the line and far away from the comic book industry, one drunken night Ian is having one of those ‘chats’…. you know the ones, they often start with; ‘you know what’s wrong with X?‘ This leads to ‘you know what we should do? We should do that, but only better!‘ Which inevitably results in a hangover and nothing else said or done.  Well not Ian, while talking with his friend Peter Rodgers they discussed creating their own comic publishers and instead of just palming it off as drunken nonsense the next day he set about creating Orang Utan Comics with Peter. 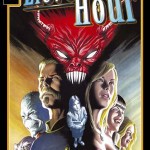 Orang Utan started off in 2007 with ‘Eleventh Hour’, nominated for an Eagle Award in the category of Favourite Black & White British Comic Book, and grew from there.  Orang Utan Comics is a group of up and coming artists (writers, illustrators, etc.) from around the world who come together to publish their own work with the help of AAM/Markosia who publish some of Orang Utan’s other works.

During our chat, one of the LSCC staff came to the booth and interrupted us.  He was carrying a stack of Orang Utan Comic books and was handing them out to other important people around the hall, but he had hit a snag, apparently people where very keen on the books, but they hadn’t a clue to how to contact Ian for distribution and were inquiring if he has some business cards.  Of course! So simple. So obvious, but just like you and me, when you are excited and surrounded by what you love, you can get lost in the moment.  A quick search around the business cards are located and all was well. During this encounter, Ian didn’t bat an eyelid and kept his happy and friendly demeanour.  Well it can happen to the best of us. 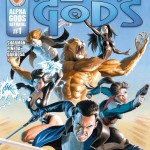 Minor crisis averted, I asked him about their comic ‘Alpha Gods’ and in particular, why did it one day just stop?  Well, Ian was happy to tell me that this was due to the artist, Ezequiel Pineda, being in hospital for a long time and was even having his girlfriend bringing work back and fourth to the hospital during this time.  He was happy to announce that it’s back and there is a lot more of ‘Alpha Gods’ to come.

So having ignored the 2000 AD booth (okay, I didn’t ignore the booth it was just busy), I was glad that I talked to Ian and Orang Utan Comics, they are one of the leading small indie/press comic publishers in the United Kingdom and are growing all the time.  I urge you therefore to go out there and support more British comic publishers, go out and support Orang Utan Comics, not just for me but for Ian, those suits can’t be cheap you know, and if you see him at a convention tell him Geek Pride says ‘Hi, keep up the good work’.