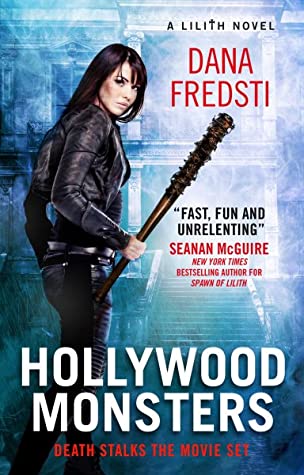 Dana Fredsti has made a name for herself in the horror genre for visceral horror and powerful female characters with a strong vein of humour.  Following the success of her Ashley Parker trilogy of zombie novels, Fredsti embarked upon the Lilith series of supernatural horror stories.

Hollywood Monsters is the latest novel in the Lilith series, where stuntwoman Lee Striga returning to Hollywood as she attempts to restore some semblance of normality to her life.  However, this is no normal Hollywood, but one that has a simmering layer of supernatural creatures lurking within the shadows of the silver screen.

The portrayal of Lee Striga is exemplary.  Fredsti entwines her own experiences being a stuntwoman with the vivid fancies of her imagination.  Hollywood Monsters works best when Lee is navigating the vagaries of Hollywood politics.  The characters’ interactions are spiced with a naturalistic dialogue that makes Hollywood Monsters an absolutely joy to read.

This is Hollywood very much in the grips of the #MeToo movement, especially in the form of a vicious producer, who’s legacy is felt throughout Hollywood Monsters.  Fredsti pulls no punches when portraying the misogynistic nature of Hollywood, both then and now, as well as peeling back the layers of the relationships that underpin the film industry.

Although this is a work of fiction, the underlying themes and mood of Hollywood Monsters are incredibly prevalent.  Yet, there is sufficient levity to balance the cultural exploration without eclipsing the dialogue.

There is a sense of the past coming to collect in Hollywood Monsters, partly through the use of flashbacks, but also in a foreshadowing of what is to come.  Pressure is continually building throughout the narrative, which explodes into cataclysmic horror during the final act.

It is almost a disappointment when the action begins, as the narrative shifts from an exploration of Lee Striga’s life into a rollercoaster of survival horror.  That said, there are some truly gut-wrenching moments that are unflinchingly delivered.  This shift in tone was initially jarring, but was well used in counterpointing the shock at what happens.

Overall; Hollywood Monsters was an absolute blast to read.  There is a joy and lightness of touch to Dana Fredsti’s writing, where warmth and humour are used to contrast moments of terror and bring them into stark relief.  Anyone looking for a fun horror novel with contemporary themes would not go far wrong with Hollywood Monsters.