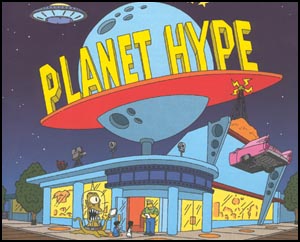 Hype is a strange marketing tool when you think about it: you build anticipation for a product before it has been released, or even fully reviewed by trusted and not-so-trusted critics, by showing the pieces of it that most excite the potential audience. This serves to get those who were already interested to invest in pre-orders or release day tickets as well as getting said audience to extol the virtues of the product to those around them who may have been on the fence. Without proving the product is any good, or without it ever having been seen by a consumer or critic, you convince people it is great. Or will be great. Or is have going to be great. Whichever past impossible never tense you’re supposed to use.

In terms of efficiency, a teaser trailer is probably the best thing a studio or publisher can release. Short, snappy, it gives enough information to get people talking about it and nothing more. A full trailer ought to follow, solidifying the interest of those snapped up by the teaser, and getting people to put their money where their excited little hearts are.

Strange it may be, but it works immensely well. I still remember the viral marketing for The Dark Knight, with snippets of newspaper taken by the Joker and puzzles that unlocked the first teaser. Brilliant stuff, it was. And then came the full trailer, allowing us to hear a little of Ledger’s portrayal of the iconic villain and enough of Caine’s brilliant speech (Some men just want to watch the world burn… *shivers*). The Dark Knight was a film everyone was going to want to watch following the surprisingly good Batman Begins, but the marketing and hype surrounding another Joker took it to record-breaking levels.

But, and this is key, hype has a limit, a point at which it breaks and settles into worry or disappointment. The Dark Knight kept itself to a few trailers, with much of the same material being shown and only glimpses of new things being released. Roaring successes like Fallout 3 showed snippets of gameplay and relied on atmosphere to sell the product. It is a fine balancing act to get us hyped for a release without spoiling it or drowning us in marketing.

A balancing act that companies are failing to even try any more.

Look at Star Wars: The Force Awakens, for example. It had about ten trailers before release, each giving little bits more away about the film, and Disney surrounded us with marketing. Just look at this. LOOK AT IT! I don’t know about you all, but I started out very excited by the forthcoming new entry into the Star Wars universe and ended up dodging every possible advert and trailer as soon as winter hit. Overdoing the exposure and marketing almost led me to not go.

I say almost. I’m not an idiot.

There are other very recent examples of this. Batman vs Superman: Dawn of Justice went from a teaser, to a couple of interesting trailers, to one which spoiled the whole damn film. And then they release another, albeit far superior one! With more teasers since. It’s like they’re vomiting footage at this point.

Bandai Namco are no better with Dark Souls 3. They have had the excellent playable demo doing the rounds for months now, with a handful of trailers to support it, but they decided recently to allow Let’s Players to record and upload the first hour or so of the game recently. Now I have to dodge my favourite subreddits and YouTubers to avoid spoilers, people who would have served to hype me further for the forthcoming game if the publisher had even an ounce of restraint.

In their haste to cement the pre-release sales, publishers are pushing hype culture too far. Not all of them, of course: look at how little we know about Captain America: Civil War so far, with the trailers showing some cool moments and hinting but not giving anything away. But many. It’s as though there are marketing executives who think the law of diminishing returns a fable, a myth told to panic young University students.

Well, it’s not. You can only excite customers so much before they get bored or angry. Less can be more, and companies could save themselves money and griping blog posts like this by just planning their marketing strategies with a little more care and consideration. 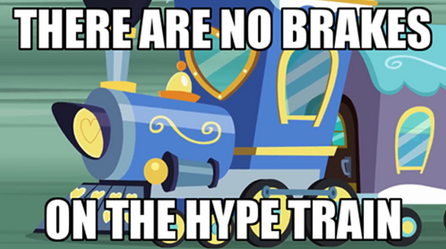