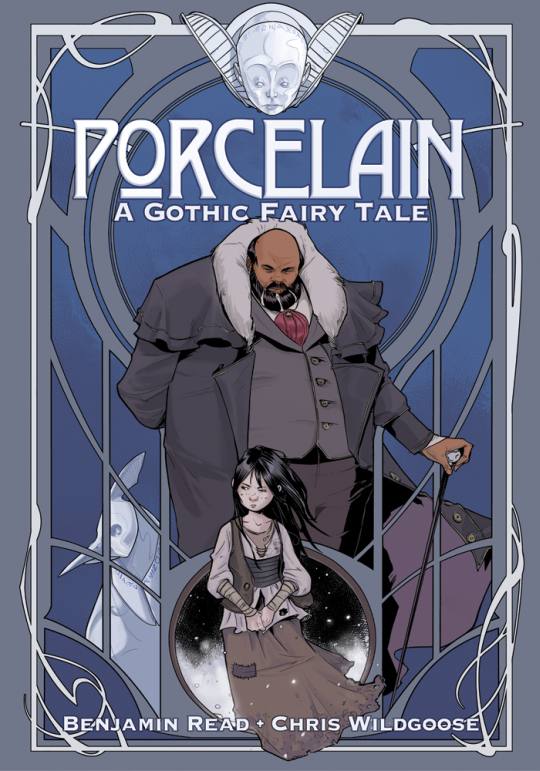 Since Porcelain: A Gothic Fairytale is launching in only two days in the UK, we decided to give you a little more information about it, since all we did lately was rave on about how good it is. The two people that were involved the most in the creative process: Benjamin Read and Chris Wildgoose, the writer behind the story and the illustrator, respectively,  took some time out of their busy schedule to give us a little background information on how the story came to be, what makes them tick and what we might be regaled with in the future. Here are their answers to some of the questions we put together for the two of them. Many thanks to Matt Gibbs who made it all possible.

Porcelain: A Gothic Fairytale is, as I mentioned above, stunning and quite unique, with lots of twists and turns, but how did the story come to be? Was it inspired by something in particular and if so, by what? 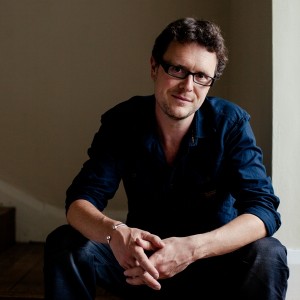 [Benjamin Read]: Thank you for the kind words. Porcelain came from a dream, one of the few times I’ve ever had that happen. I normally collect images and ideas and noodle in my pad until something coalesces, but Porcelain came almost fully formed – I woke up in the early hours, from a feverish sleep, with the girl, the walled garden, an elderly wizard and his creatures all there already. I scribbled it all down in the pad I keep by the bed for that purpose, then passed out again. I only found it a few days later. It took another year on-and-off of work before it became what it is today. As far as influences go, there’s a chunk of Bluebeard in there and a soupςon of Oscar Wilde’s Selfish Giant, but I hope it wears both of them fairly lightly and is its own beast.

[Ben]: I read everything I can get my hands on; everything. Lots of fiction, stacks of non-fiction, a lot of comics, but a tonne more prose. I think it’s part of the job, both for craft and inspiration. It’s never a chore either as it’s my favourite thing to do. Then from that there’s always something that forms into an idea. Normally two very different things that clang sparks off each other.

[Chris Wildgoose]: I’m much the same as Ben- I’ll go away and read a lot, Ben will recommend a lot too and suggest artists that have influenced him along the way, and I’ll absorb art styles and see if there’s something I’d like to try or some kind of influence I’d like to shine through. That just comes from looking through piles of art. For Porcelain I was looking to a lot of European artists and seeing how typically a European page would flow.

There was a moment, while I was reading the comic where I was sure I knew how it was going to end, then everything changed and suddenly it was an entirely new perspective on what could’ve been a cliché. Suddenly I had to play detective and look for clues as to what was going on. Was that something you have done on purpose? Was it motivated by a personal disappointment in certain stories you have read?

[Ben]: Oh, it was definitely deliberate. One of the joys of working with fairy tale architecture and the trappings is that the audience is convinced that they know where the story’s going and that they understand the tropes. As a writer, if you can veer off that path and into the woods, and take the reader into unknown territory then you can start to create something really interesting.  I don’t think it was motivated by disappointment in other stories, just by an interest in doing something different with the form.

At the back of the book there are quite a few sketches, showing the evolution of Child and of most of the characters. 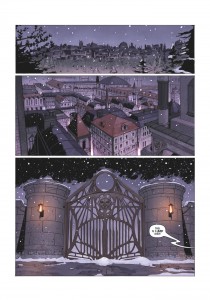 I loved those little tidbits that showed us the creative process that went behind this comic. Could you give us a little more information from  “behind the scenes”? How did you two work towards creating this comic, was there any time that your opinions clashed as far as the end result was concerned, things like that.

[Ben]: Normally, I write full script and Chris comes back with his interpretations, then we gently wrangle it until we get something we’re both happy with. We have very similar aesthetics so we very rarely clash. Indeed, I can’t remember anything we’ve been at loggerheads over. The Porcelain process was mainly us figuring out how we worked together and many hours were spent on Skype as a result of a slightly description-lite script on my part. As a direct result of that, I write a lot longer, more descriptive scripts these days to save some of that time.

[Chris]: I think the biggest thing I was argued down from was the colour of Child’s hair, as at first I was adamant she was a redhead! Other than that I don’t think we really had any head banging moments. As Ben mentioned, this was our first ‘long form’ book together so we mainly just ironed out our process of working together and we really just wanted to get the best thing we could out, so I think we knew there was going to be times to consider the others points.

The story is quite dark, yet there’s a sliver of hope that comes from the pages, or at least it seemed so to me… Now, my question is, in a world of prequels and sequels and third cousins twice removed of an original story, have you ever considered continuing this, as opposed of it being a one-shot?

[Ben]: Yup. Watch this space… *Retreats enigmatically into the dark.*

If you could change anything about Porcelain: A Gothic Fairy Tale, would you do it? And if so, what would it be?

[Ben]: I’m sure there’s fifty things both of us would tweak or expand upon given the chance, but that way lies madness. You make something to the best of your ability at the time and move on to the next one. You look back on what wasn’t right with it and make sure that you don’t do it again, that’s all. Je ne regrette rien.

[Chris]: I wouldn’t change anything big. But if I had to name one thing, I’d say I wish I’d used the Mr Ruffles character a bit more. He was fun to draw and could be used to have a little bit of background mischief. 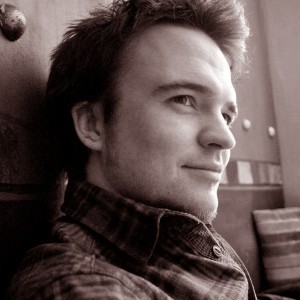 Benjamin, you have been involved in several things: comics, movies, could you tell us a bit more about the films you’ve had a hand in when it comes to the writing? Warhouse comes to mind, 500 Miles North. How did these two projects come to be? How different is it to work on a movie from working on a comic book, from the writer’s point of view?

[Ben]: I work with the director, Luke Massey, via our little production company M&R Films Ltd, to make UK indie films. Warhouse, our horror film, starring Joseph Morgan, is out November in the USA via XLrator Media. 500 Miles North, our darkly comedic road movie, is still in post. The process is totally different than writing for comics though. For starters, I’ve written both films with Luke rather than solo. That’s a big change- hugely enjoyable though, and very productive for both of us. Also with comics, you’re just writing for the artist pretty much- that and the editor are the only people who really have any input into the finished product and the script is 50% of that product. With film, the script is a framework that the film is built on and anywhere between 20 to 50 people, even in a small team, will have input- director and actors, of course, but also sound, costume, art design, colourists, and a stack of other people will affect what goes on screen. You simply can’t be precious about what happens to your words. I save that for comics 😉