Okay…let’s rock this boat. By now you should assume you’ve been properly saluted and given all due respect, given your rank in the ZSC and your standing in the writing/entertainment community, so we can get down to business (and no, we’re not defeating the huns).

You’re a co-founder and leader of the Red Brigade in the Zombie Survival Crew, a “movement” that has really 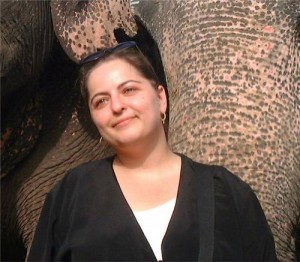 picked up with The Walking Dead’s success, how did the ZSC come to be?

I’m a former foreign war correspondent and one night in 2009 while messing around with fellow writers on the Internet, they joked I’d be the perfect person to lead a survival crew during the zombiepocalypse. It became a running joke and a couple weeks into The Walking Dead’s first season I wrote a blog post detailing which characters on the show I’d like to have as part of my crew. A couple of the show’s actors saw the post, commented on it and my readers went wild.

Since then the Zombie Survival Crew, which is free to join and open to anyone, has taken on a life of its own with thousands of members in 14 countries all working to prepare to survive any manmade or natural disaster. We’ve got dozens of celebrity commanders including Michael Rooker, Norman Reedus, Ernie Hudson and Kristin Bauer Van Straten—each of whom has one or more real-world social or developmental issues that they work to address.

I’ve known you for a while, albeit solely via social networks and while you’re rubbing elbows with some big names in the entertainment business, you’ve still managed to stay really down-to-earth. Did you ever find it difficult not to allow yourself to be swayed by the glamorous lifestyle of the rich and famous?

Honestly, no. All of the actors I work with are laid back hard-working folks. They labor intensely on their craft to meet the expectations of their fans and to take opportunities to work on causes close to their hearts. I tend to put in really long days, like 16-17 hours sometimes, trying to get everything done because I know how hard they’re all working as well, and there is so much to be done. Many times, like now, I find myself sitting in my pajamas still working when more sensible people would probably be asleep for the night.

On the 25th of February, Blindsided by The Walking Dead has hit the shelves, a book which you’ve co-authored with IronE Singleton (better known to TWD fans as T-Dog) What can you tell us about this book; how did it come to be?

It’s a book that has been decades in the writing really. IronE had an extremely challenging upbringing and somehow managed, with faith and love in his heart, to overcome every step of the way. His ability to get past it all is powerful testimony for everyone. IronE has a message of hope he’d been working to deliver and the time just seemed right to put his story into book form.

What drew you to this story and what do you think will resonate most with the people that read it?

The honesty, and the love. Not once in the telling of his story does IronE shy away from the often painful truths of what he experienced growing up, of the mistakes he made along the way. But through it all, he managed to keep hope, faith and love alive…and if he can do it, all of us can. 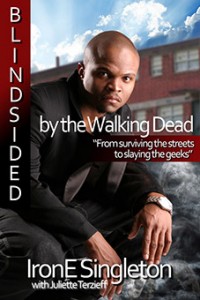 From the glimpses we’ve been given through press releases, we learn that it’s the story of one man’s struggle against unfavorable odds, while writing it, were you two hoping it might become an inspiration? Is there someone in particular this book is addressed to or is it simply an exorcism for IronE?

Absolutely. It is my sincere hope, and I believe IronE’s as well, that the book will help others. The scope of his experiences and the material in the book hold insights for a broad array of readers – athletes, aspiring actors, inner-city residents, young women, parents. I wouldn’t say it’s an exorcism. Far from it. It is a message of hope and love from IronE to the other members of our human family.

Is there anything you would’ve liked to include in the book but it never made the final cut?

Not really. The book is full to the point of bursting with powerful details about the most intimate parts of IronE’s life. He left out almost nothing in the retelling of his story.

Could you tell us something about your personal experience of working with IronE? He’s quite beloved by his fans, but few get to truly know him- anything you could tell us about him that we won’t find out from the book?

Since you’ve had your own fair share of experiences abroad and domestic, as a war correspondent, as a writer… can we expect a biography of your own to hit the shelves soon?

Perhaps one day. The idea is certainly percolating in my head. I even have a working title: Mudbugs with Rooker. Check back with me in a decade, if I haven’t written memoirs yet, I’ll explain that title choice.

What's there to say about me? I love the sci-fi and fantasy genre when I read, but I am in no way limited to that alone. I do think Frank Herbert deserves a statue for his writing(if there is one, point me in that direction, please). I enjoy writing quite a lot, but I am also kinda lazy. If you want to make me happy give me books or Doctor Who collectibles. Or a real TARDIS, in which case I will love you forever.
You might also like
breakingspotlightThe Walking Dead