Originally thought to be yet another April fools prank, Far Cry: Blood Dragon is due to released on PSN, XBLA and PC on May 1st. The game will be a stand-alone title, featuring a single-player campaign using the Far Cry 3 engine, set in the future, but one based on the vision of films and cartoon of the 80’s – amusingly, the year 2007. It will feature cyborg soldiers, mutant goats, cyber dogs and dinosaurs. If that’s not enough for you, there will also be cheesy one-liners delivered by none other than 80’s action film legend, Michael Biehn. How cool does that sound? 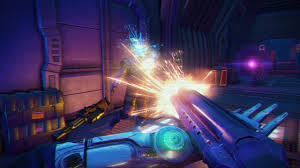 The  price for the console versions has not been confirmed yet, but steam currently has it marked at $14.99/£11.99. For a trip down memory lane and for a chance to be blinded by explosions and neon visuals, I think it’s well worth coughing up a few quid for.

I'm a 35 year old, self-confessed media junkie from London. I currently work as a tester in digital media (some say I get paid to watch telly) and also worked as a games tester in the past. I also spend a lot of my spare time watching films and playing video games. Thankfully I have a very understanding wife, who allows me time to do so.
You might also like
1980s80sbreaking