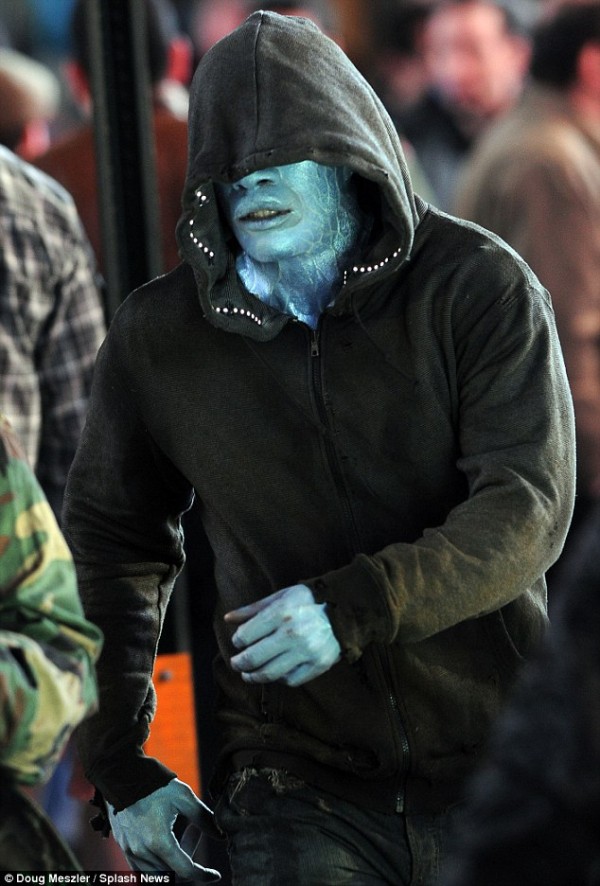 Well Mark Webb’s sequel to The Amazing Spider-Man is currently shooting, and we’ve just got the first glimpse of Jamie Foxx as the movie’s villain, Electro. If you were expecting a look similar to the comics (above), then you’ll be disappointed. Here’s the makeover that Spidey’s latest nemesis has been given:

The Daily Mail showed us some of the very first images from the set, showing Foxx’s makeup job, and I like it – the hooded look makes me think of the game [Prototype] a bit, and I wasn’t expecting the blue face either. We can’t tell if this is Electro’s “costume”, or if Foxx is just going between sets and is covering his outfit- then again Electro could be going incognito.

Electro’s real name is Max Dillon, and he gains his electrical manipulation abilities when he’s struck by lightning while working on an electricity pylon. Starting with rather weak capabilities, in the comics Dillon stole electrical equipment from Stark Industries to charge himself.

Now I’m not all that familiar with the character of Electro so I don’t have much sentimental attachment, but I think using the same costume as the comic books wouldn’t have been in keeping with the style of the movie. So looking at these images I’m not all that fussed about the changes that they’ve made to be honest, and he looks pretty badass.

Are you happy with the way Jamie Foxx looks in his new role, or are you irritated that the look of Electro has been changed so much? Let us know by commenting below!