previous
Looking Back At The Saint's Row Series
random
next
Trask Industries: Helping to Protect your Future!

Lara Croft is Terrible at her Job

Tomb Raider is one of the staple franchises of the last 20 years. Its protagonist, Lara Croft, is nowadays as recognisable as that Italian plumber and the blue meth sellout hedgehog.  What makes her such a fan favourite? The ponytail, the tiny shorts, the double pistols and of course, her massive eyes. 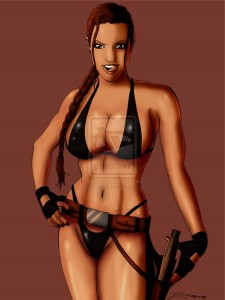 Lara however suffers from the problem of most gaming icons; she is terrible at her job. Like how Mario does no actual plumbing (and should also NEVER work in a reptile pet shop)  Lara Croft the archaeologist is just plain awful at her career. Why, you ask? Here’s why.

Firstly, Lara is a tomb raider. Her raison d’etre is the raiding of tombs and the uncovering of treasures and artefacts. The point however of an archaeologist is to uncover these treasures and A) sell them and B) preserve them. Because, as Indiana Jones said “These belong in a museum!”. This is something Lara fails at. Hard. Because she ritually loses, breaks and leaves treasured artefacts along all of her games.

The self-titled reboot sees Ms Croft take a single coin from each treasure she finds. Aah that’s nice, she’s not being greedy, right?  Yeah, if you forget that she’s in the Asian version of the Bermuda triangle, so any plane she sends to get the rest of the stuff will crash, burn and be lost forever. And please don’t even tell me for one second that she doesn’t have room in that bag of hers, because she manages to fit a shotgun, arrows and various other weaponry in its T.A.R.D.I.S innards, with no discernible weight penalty. This isn’t even the worst of it: in Underworld, you actively have to KICK APART ANCIENT VASES to get the treasures inside. The amount of time our heroine explodes walls to gain entry and is seen leaping from a temple as it becomes rubble is innumerable. These temples and tombs were perfectly erect until Miss English turned up, guns ablaze, screaming something about the Queen and abusing her butler. 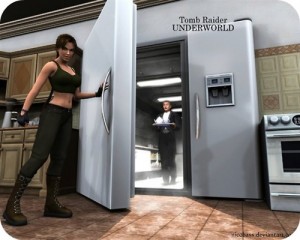 Lara! How could you be so… cold.

Her principles and actions are against everything an archaeologist stands for. Even in the (godawful) films Lara destroys everything she touches. At the end of the first film she completely destroys the temple in a bid to escape the clutches of… no one fucking cares what his name was. The point is she’s clumsier than a drunken deer on an ice lake. 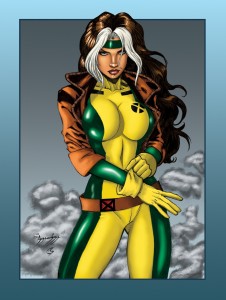 So after a hard few hours’ destruction of precious, antique cultures, you’d think our Lara would be a tad petered out. But you’d be wrong. Apparently Ms Croft isn’t done with her day unless she has laid waste to a few endangered species. The first game sees you straight up murder  the world’s only T-rex with your faithful boomstick; the second has you Moby Dicking a lonely sea snake and ANOTHER yeti (which she had only discovered the existence of in the first)

And Underworld? In a single level you slaughter sabre-toothed tigers, great white sharks, giant geckos and rare fruit bats. SHE entered THEIR habitat, then MURDERED them with TWIN SUB-MACHINE GUNS. There isn’t a game where Lara isn’t murdering for funsies, and the new game takes it one step further. Instead of taking photos of the lost cultures found on the island, Croft stabs, pokes, blows up, shoots, chops and throws off a cliff the last remnants of Chinese dynasties and WWII like it was nothing but a thang. And I have it on pretty good authority that the end boss was three midgets in that suit, cosplaying for charity. 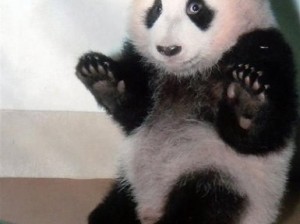 “Shit Lara, I was just snoozin’! I’m sorry, just take the treasure, it’s all yours, you want some bamboo?”

So there you have it. Homewrecker, vandal and mass murderer, Lara Croft just goes to show that as long as you can rock short shorts, it doesn’t matter how awful at your job you are.

Hailing from Kent, England, Mike is a writer, editor and podcaster who has just finished his degree at CCCU. He also is a drummer of 11+years, plays in several bands, and is available for session work. His other interests are Batman, music which doesn't suck and pizza. Follow Mike @The_Dark_Mike
You might also like
breakingDinosaursGeek Pride