previous
Lara Croft is Terrible at her Job
random
next
Episode 152 - A new host! or Danny Strikes again!

Holy Jesus H Christ riding a veloceraptor on heroin this is cool! The “this” in question is the new viral ads for the upcoming X-men film, Days of Future Past.  Upon opening one of the many YouTube videos you will undoubtedly open in the next few weeks you are likely to see this ad pop up:

The video is for Trask Industries. That’s right… the creators of the sentinel program that have plagued mutantkind for years, even as late as a 2011 with the X-men storyline “Schism”. For those not in the know, sentinels are killer robots tasked with detecting mutant DNA and eradicating it. They are a staple of the X-men mythos, and very much like the daleks, they don’t know when to quit and they never stay dead for long. 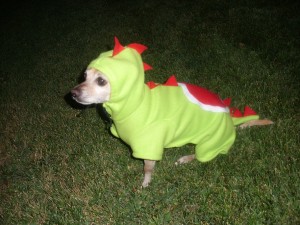 I couldn’t find a sentinel/dalek crossover, so here’s a dog in a Yoshi costume. Kawaii, or whatever.

For those of you that stayed behind after The Wolverine and got the goosebump-inducing extra scene, Trask is the threat that Charles and Erik have grouped together to defend against. This is why they need Logan. This why the upcoming film is going to be monumentally good.

Trask Industries also have a website you can access  here where you can find out more about the history of Trask, and what they’ve been up to for the last 50 years. 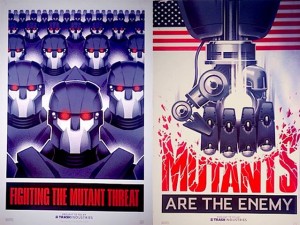 For those of you who can’t wait and want to know even more, the general consesus is the Days of Future Past storyline is going to remain fairly faithful to the comics, so go to your local store and grab yourself the TPB. Too lazy for that? Find yourself a copy of the cartoon Wolverine and the X-Men, as this is also fairly true to the original DoFP story. Happy viewing, guys, hope you’re as excited as we are!

Why everyone here is pissed but Wolvie is anyone’s guess.

Hailing from Kent, England, Mike is a writer, editor and podcaster who has just finished his degree at CCCU. He also is a drummer of 11+years, plays in several bands, and is available for session work. His other interests are Batman, music which doesn't suck and pizza. Follow Mike @The_Dark_Mike
You might also like
breakingDays of Future PastMagneto